One year of travel – what would that be like? The beauty of travel is that even when you are currently not abroad, you can still go back to that special place full of memories. I have now been travelling for two and a half years. This was mostly nonstop but last year was a tremendous change. However, this didn’t mean that I slowed down a lot. 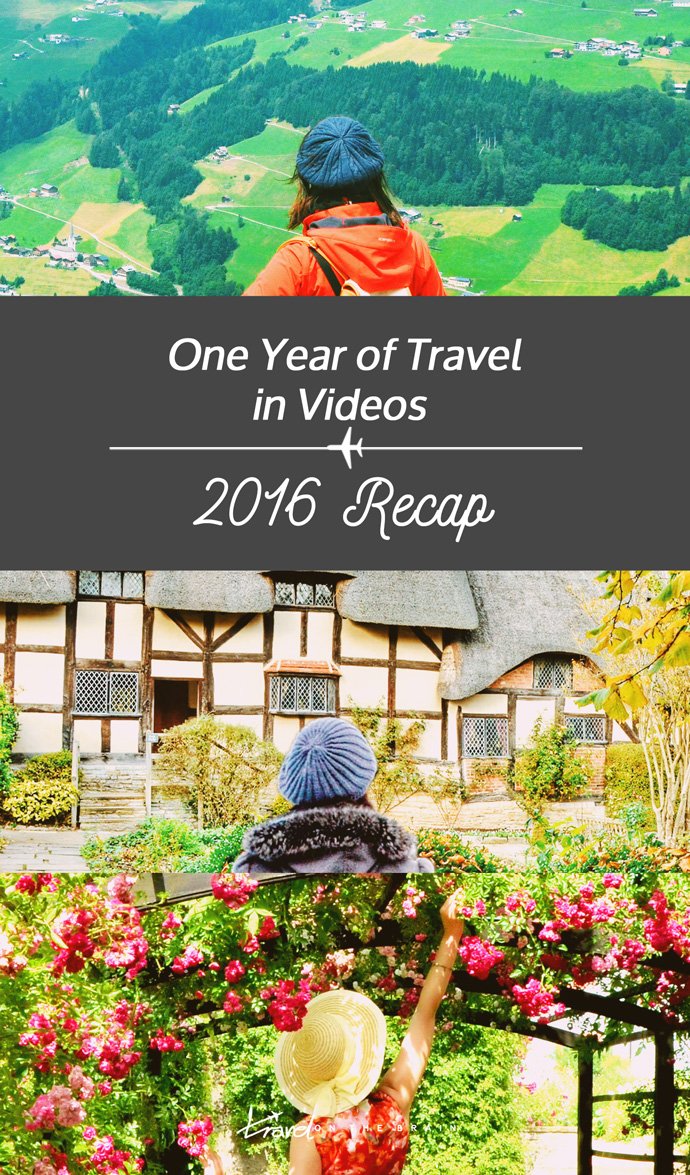 I mostly stayed at home, exploring my own country. I initially had planned a break for a while but then that changed when I was invited on my first trip three weeks into 2016. And the unexpected journeys did not stop. For a week I was flown out across the Atlantic to cruise around eight Caribbean Islands with P&O.

Getting there was a real adventure as I had to take two rushed flights for which I had to cross London for a super short stopover. Then my luggage was delayed so that the cruise ship left and I had to sort out a last minute flight the next day. Let me tell you, I wouldn’t recommend that at all. That was one expensive flight!!

[su_service title=”Read also: How to get through the airport as fast as possible” icon=”icon: plane” size=”22″][/su_service]

The trip itself was spectacular. As you might know, I am quite a cheapskate traveller that started out as a shoestring backpacker and transitioned to a low key flashpacker. So to get a royal treatment on a giant cruise ship that looked like a five star hotel everywhere I went, to dress up in fancy clothes bi-nightly and get the chance to wake up to a new island every day was more than I could hope for.

Having landed in chilly Germany, I packed my bags and headed straight to alpine climates in the Thuringian Forest. I was greeted by a snow storm for which my ski newbie lesson had to be cancelled. Well I ended up dancing through a winter forest. I definitely didn’t complain. (Watch the video here.)

February was a bit quieter as I moved into my Brazilian friend’s place in Malmö. I have lived in Sweden’s third biggest city before during my time as an intern at the university. Back then I looked after 100 newly arrived students from all over the world. Some of which I caught up with during my world travels. This time, however, I met with my former colleagues.

In March, the sun finally came out in Sweden and that means both the flowers and Swedes were out and about as well. That’s when the Scandinavian country really comes alive. I spent most of my time planning and hosting live Q&As and travel workshops for you via youtube. But of course even though

I know southern Sweden pretty well, my travel feet didn’t stay put for long. I visited Lund for the famous Easter witches celebration, which I missed the last time as I had to work. Not this time, though! Keeping myself busy and focused (at least I tried very hard), I made my way back to Germany on a ten hour trip across land and sea to attend the world’s biggest travel trade show, ITB in Berlin. This led me to a few more adventures later on.

My time in Sweden was coming to an end – sooner than anticipated. But if travel has taught me something, it’s not to resist change and make the most of the moment you have. So, I spontaneously hopped along the coastlines of the Öresund channel for three days and tasted my way through Copenhagen. If you are staying in either Malmö or Copenhagen, factor in at least three days for a full-on Scandinavian coast adventure. Further places I visited included Falsterbo, Landskrona, Hjärup, Helsingborg, Helsingor and Kokkedal.

May started to kick up my wanderlust stories a notch as I went on a few tours across my home state in Germany, Thuringia. If you have never heard of it before, that’s what my tours have been about! I want to tell the world more about it because it really is beautiful und sadly underrated. Honestly, can you name one city in the centre of Germany? See! Two stunning places that I got to know close up were the Rennsteig and the Rhön.

Once I start, there is no stopping me and so I crossed borders and visited Luxembourg for the first time. It completely took me by surprise. It might be a small country, but there is so much beauty in its capital alone. Fortress walls arching high above the fairy tale town with its lush gardens and river.

[su_service title=”Read also: The top 5 cities to base yourself to travelling Europe” icon=”icon: plane” size=”22″][/su_service]

From there, I jetted over to England to retrace the steps of my literary heroes. 2016 was the anniversary of Shakespeare, Jane Austen’s Emma and Emily Bronte. So naturally, I had to visit all the important settings of my beloved authors and their iconic novels, such as Pemberley or the Yorkshire Moors. Before I left, I let my inner kid roam free on three different Welsh castles in and around Cardiff. If you love castles, Wales should be on your bucketlist for your own year of travel.

Back home in Germany, I changed the pace. Usually, I walk everywhere but for Weimar, I grabbed a bike and rode next to the swaying green corn fields dotted with red poppies. I saw grand German castles, grand parks and houses on a pond. Who knew all that was so close to where I grew up?

A little further north, I visited another German state for the first time. (Yeah, that’s still possible.) The Harz outdoors were a playground for me as well. We strolled through the peat, jumped into giant pillows on mountains, raced down the wet slopes in a bob sled and wandered through the tree tops. If there’s one video you see in this playlist, make it this:

Sticking with the Shakespeare theme this year (cause I love him to bits), I went to Austria to see Romeo & Juliet. The play wasn’t just a regular staging of the timeless piece, it took place high up on the Alps. I visited the Austrian region of Vorarlberg on a press trip and fell in love with the region instantly. Gorgeous mountains with small village houses scattered all over, winding hiking trails and delicious food (those cheese spaetzle!). Of course, there were cows as well. And of course they chased me. Some things never change.

Afterwards I headed for a little family break and the occasion of my birthday to the German coast of the Baltic Sea. Even in summer the coast can be chilly and windy, but we still had a great time. From the coastal towns of Boltenhagen and Wismar we headed inland to the state capital Schwerin. It has a fantastic fairytale castle, where I got to climb up to the roof.

This post is getting quite long, so stick around for part two this Tuesday. Until then, I’d like to now: what was your favourite travel part in 2016? Which adventures stuck out? Did you strike off anything from your bucketlist?

10 Reasons to Visit Jena Christmas Market in Germany in 2022