It was nice to sleep in for a change. Look how far I’ve come when I, a die hard long sleeper, think it is sleeping in to awake at 8 am. Formerly that would have been correct at 10am. But there you go. Travel changes everything. 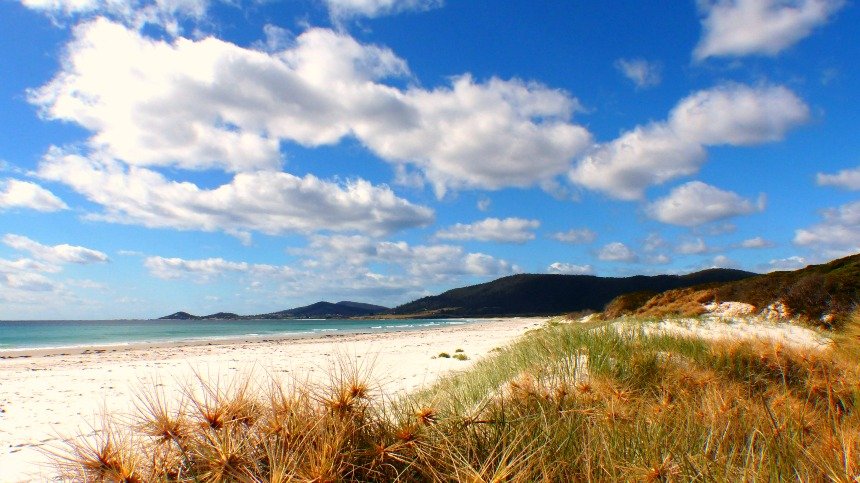 Our Jumptours group quickly consumed breakfast, packed their bags and headed off to our individual morning activities. For some that was a stroll through town, for others it was the wildlife conservatory and for me it was a chilled out morning by the beach.

It was a splendid day for that and I decided that I would go and see Tasmanian devils in Sydney and use the sunshine to just stock up on vitamin d and get rosy cheeks from the salty breeze.

Taking photos of the beach and me standing by the beach I was in a happy mood when all of a sudden I realised my phone was missing. 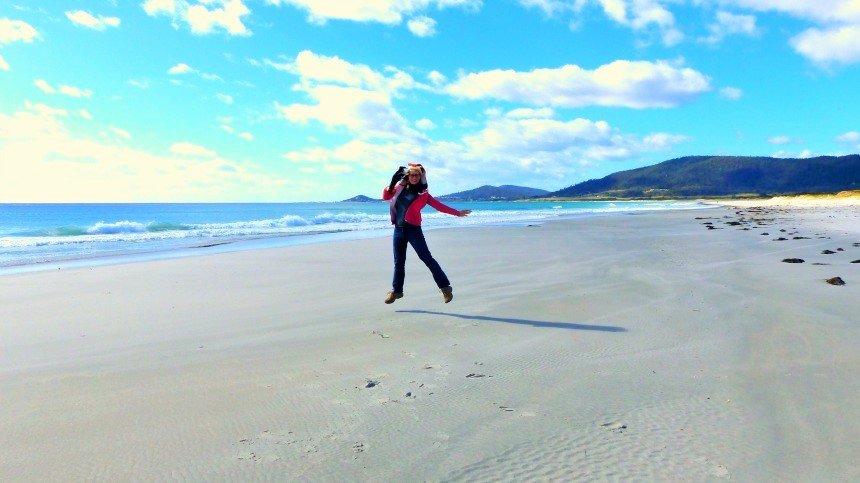 A wild search began and I felt the panic rising and gripping my throat. Not again. The last time that happened was in Cairns where I had left it in a souvenir shop.

Practically traded a phone for a 30c postcard. Not a good exchange. I got it back after asking at every place I had been to in the last 30 minutes. And this included a lot of places.

Not only that but I had been on a temp job hunt and showing everyone how scatterbrained I was, didn’t seem like my best coup.

Anxiously, I tried to reconstruct what had happened in the last 10 minutes and after careful deduction and exclusion through my Sherlock like skills, finally concluded that it had to be left on the bus seat.

That left me in light;y better peace of mind but it is hard to rest when you cannot be 100% sure. I was right, though. It was waiting for me on my seat.

That settled my net big excitement lay just around the corner. High and mighty did Mount Amos loom above us, daring us to climb it, warning us to not be fools. I am no fool, but I certainly have my crazy moment. One of them was said climb. Boy can my sore muscles tell you stories! 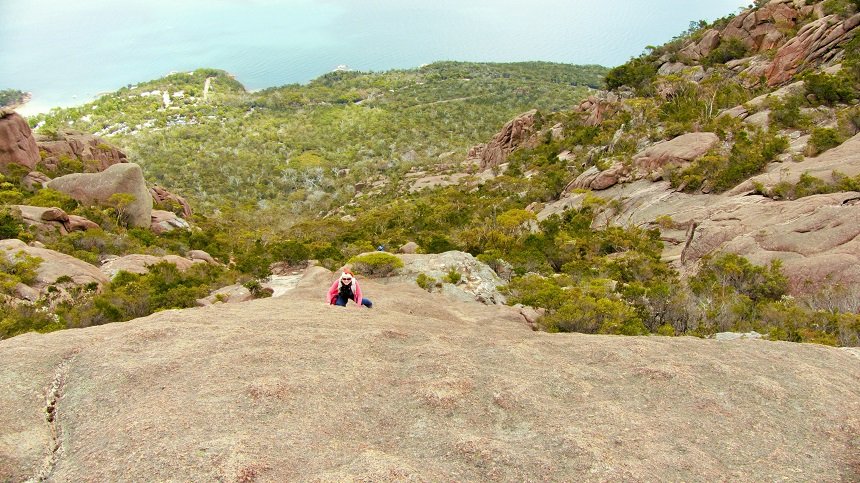 Spiderman on the Hike

We were told that the hike up was only for experienced hikers and people with good shoes. I wouldn’t count myself to either category but how hard could it be anyway? I was in for a big surprise as were my fellow travellers. We quite underrated the whole thing.

The climb started innocently enough on a relatively flat winding path that soon led to a smooth rock surface. There was hardly anything to hold on to and we were supposed to climb up there. How do you climb a smooth surface?

Our tour guide introduced us to the uneven surface of the rock that was betrayed by different colours. Thus, we avoided the orange and white bits since they were worn out and made super slippery by rainwater and rubber soles. Well, not everyone understood it, though but we didn’t have any accidents. 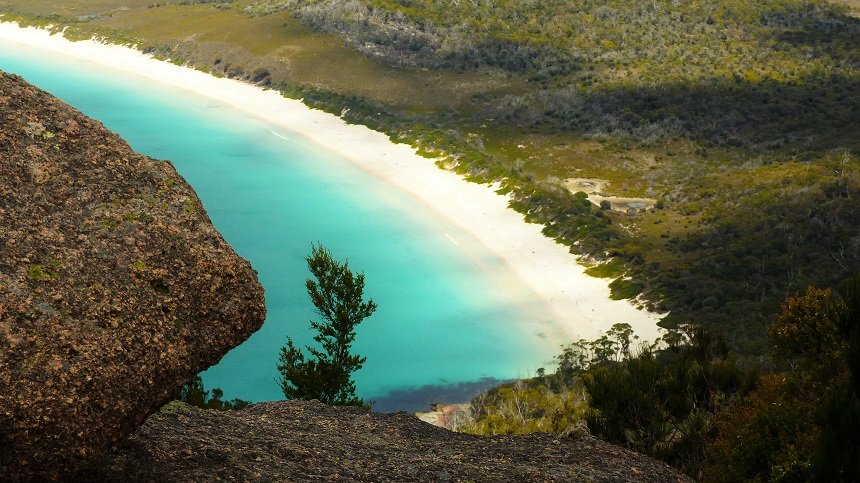 Just when I thought the worst part was over, the next one came and then the next. It would become steeper and steeper, smoother and smoother until I had to reveal my amazing Spiderman like crawling abilities to make my way over the rocks.

To be honest, I got better only towards the end and the way down. In the beginning (and much of the way up), I was a hopeless case. Since I had thrown away my backpack, the only daypack I could and would use was my shoulder bag.

Not a good idea when you are rock climbing and it is swinging all the time, hitting you full force with its heavy content of food and water as if to remind you of the powerful force of gravity and the chances of it dragging you down. 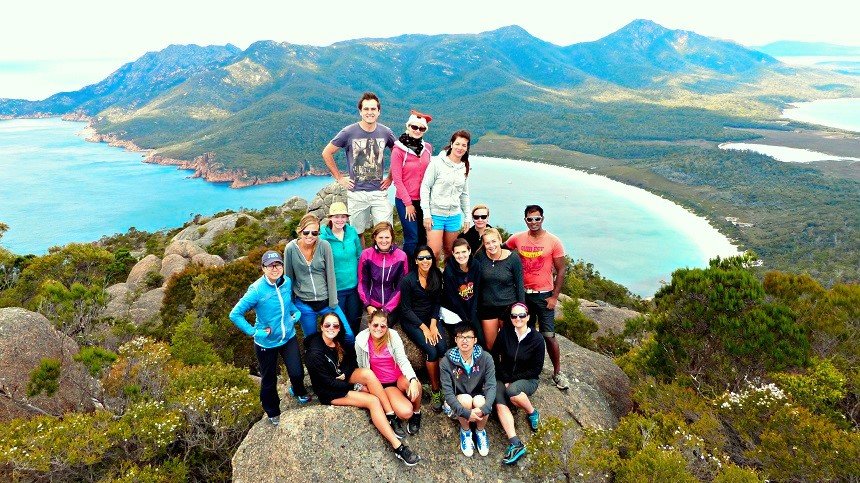 Speaking of down, it was not such a good idea to stop and stare. Whenever we sat down to rest (or I did while everyone kept moving on and a friend stayed with me), I had to turn around and face the abyss. I can’t even explain how terrifying it looked.

Good thing I don’t have a fear of heights and instead a sense of sensation, which lead me to see the world through a lens, making the whole view less frightening.

Aeons later I had made it to the top and joined the others, who were already feasting on their lunches. Mine was already decimated I needed energy! The view up here was spectacular and we could see far and wide.

I agree with those who have been to Tasmania and were full of praise for its beauty. It is undoubtedly deserved. 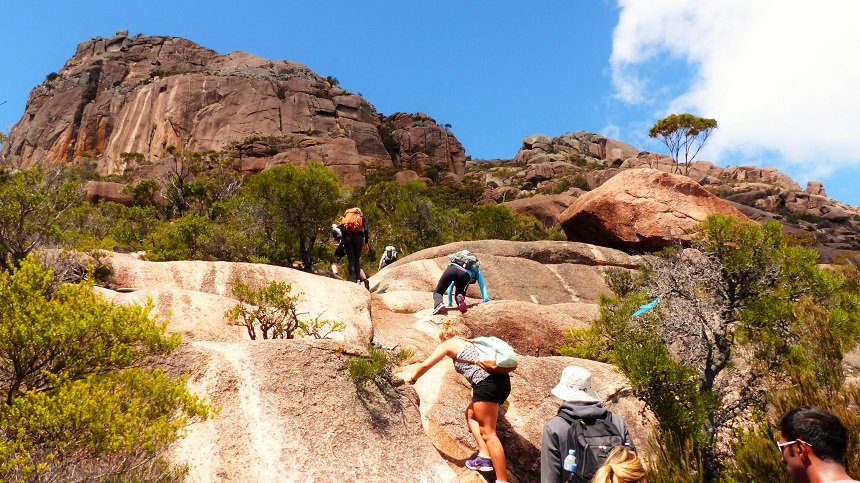 Some of our group had opted out from the big hike and chosen the shorter walk to Wineglass Bay, which we were now able to behold. It would send photographers into raptures and me consequently on a photography session.

Did you know that Wineglass Bay received its fancy name through a euphemism of Tasmania’s bloody past. Bloody is to be taken literally here since the island did not only serve as a lock up for the worst of the worst criminals but also was a playground for whalers and other animal torturers.

As a result from all the whale hunting, the waters in the bay had formed red with the corpses’ blood and intestines. Not a nice image and hard to imagine nowadays. 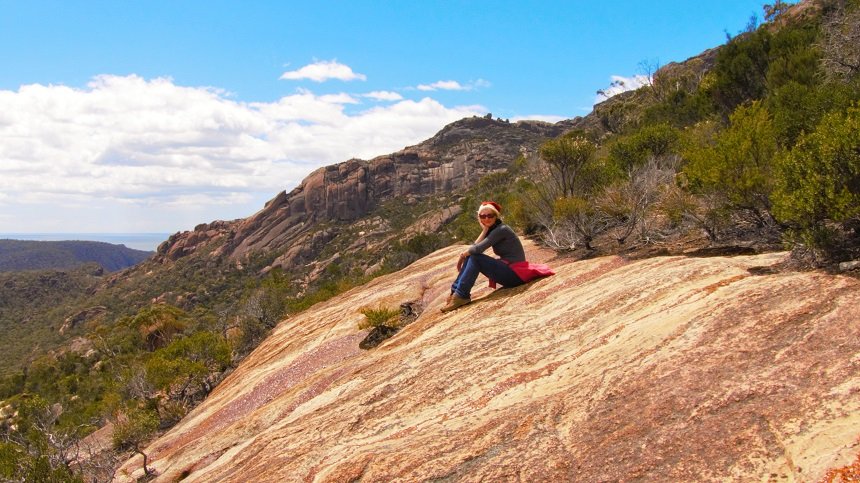 The past is in the past and we had to move on as well. Or move down, more likely. I had been rather scared of it since the view from above suggested the mountain side was even steeper than before but, like I mentioned earlier, I did pretty well.

To reward ourselves, we stopped at a berry farm in Wineglass Bay and ate ice cream with a view over the berry fields. I tried lavender flavoured ice cream and surprisingly liked it (I am not such a big fan of the scent). It reminded me of smurf ice cream.

After that, we made our way to Hobart, which was my final destination in Tasmania. So all in all, on my short journey along the east coast of Australia’s largest island, I saw a lot of beautiful scenery and even the drive itself showed me breathtaking views outside my window. 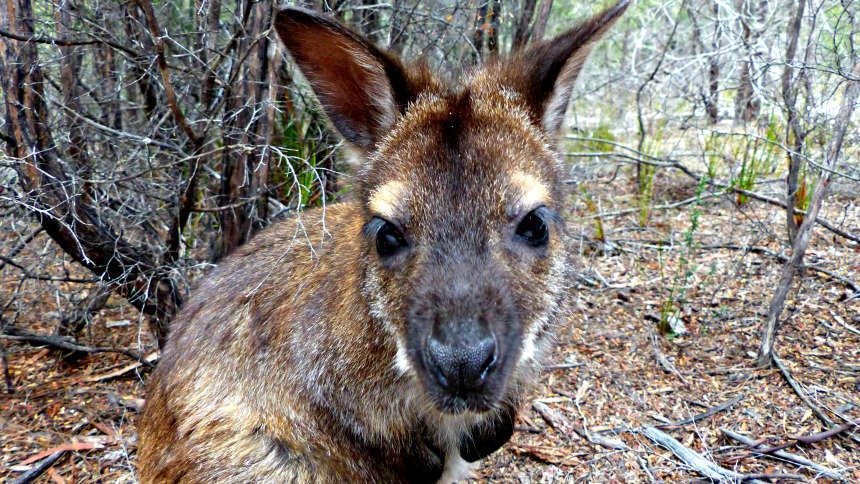 On Fire in Tasmania with Jumptours
Recipe Corner: Eggs in Mustard Sauce 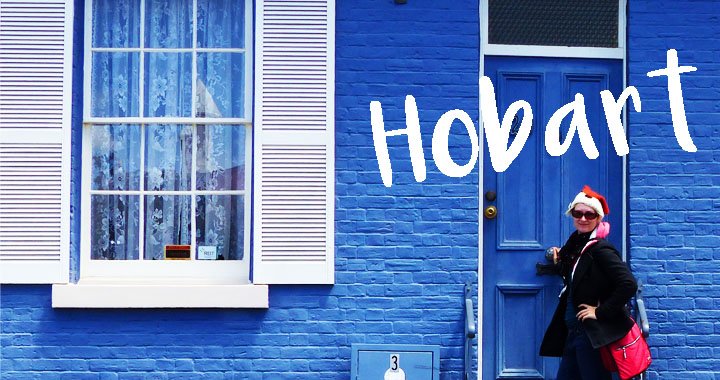 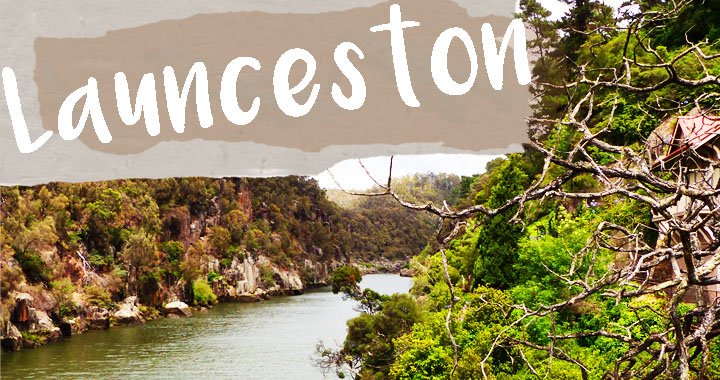 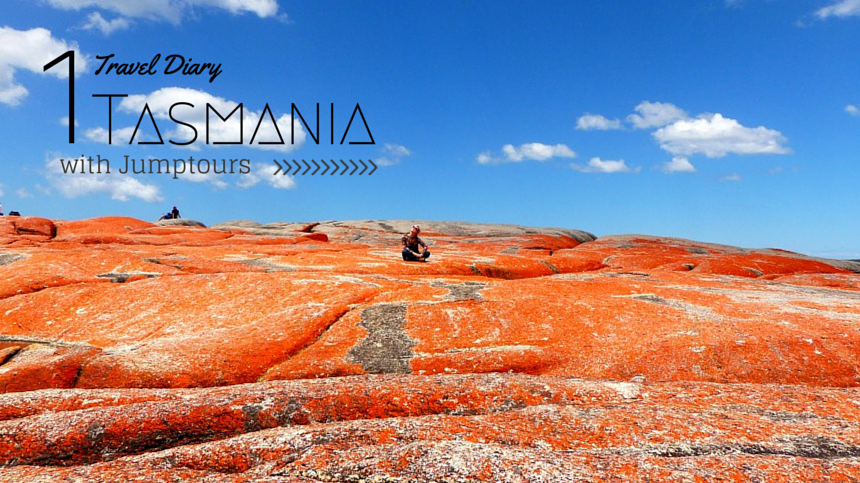