Carnival, Mardi Gras, Fasching… carnivals across the World go by many names but the spectacular feasts of colour, excitement and a rush of endorphines surely dominates many a cultures’ plans for February. Now here’s a little confession: I have never ever attended a carnival myself and I am from Germany, where we go crazy during ‘Fasching’ (and I mean cutting off men’s ties, making obscene jokes and dressing appropriately for children’s costume parties). 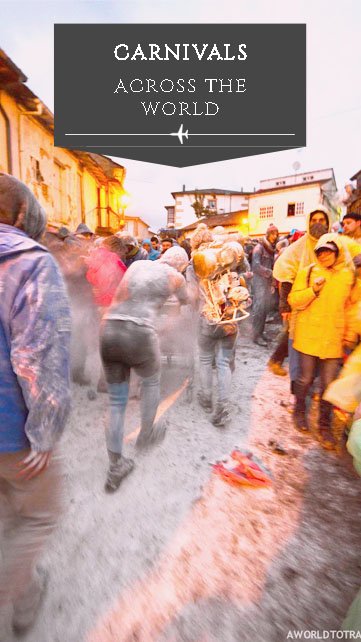 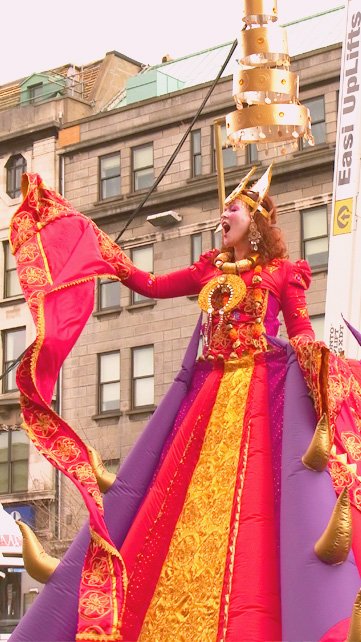 Now, I love dressing up (did you see my travel wig collection or the day I spent walking Seoul’s streets being heralded like a queen?) but carnivals so far have not attracted me for some reason. Once I stumbled upon the Pride parade in Hamburg with lots of confetti and costumed men. Does that count? In any case, I am no stranger to new experiences and asked you lovely people to tell me about the celebrations you are attending or have attended throughout the world to pay my respects to the sentiment of carnivals across the World: be every colour that you are and let’s embrace diversity!

Oh, I remember one time I visited St Patrick’s Day in the one and only Dublin. To be honest, I didn’t really see that the Liffy had turned green like is done in many other cities, but I saw the Oxbridge boat race, met some lovely people along the way, did a Guinness pub crawl, attended the floating parade and generally had a big blast. I can highly recommend it to you and here’s a little tip: arrive two days prior to explore the city, dance a ceilidh the night before and have a lot of craic.

So, to cut a long introduction short, I hand the stage over to you. 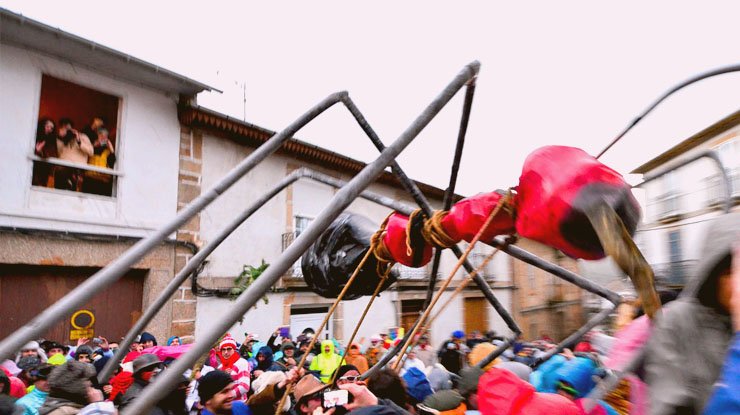 As Galician (born and raised in this North West region of Spain), I can’t stop recommending everyone one of our most celebrated festivals: The Entroido or Galician Carnival. Last year I wrote an extensive article about the dos and don’ts of the Entroido that you should definitely check out but for now, I will leave you with my favorite happening: The Entroido in Laza, Ourense, highly recommended if you like getting messy for the sake of it.

In Laza, a tiny village in Ourense, the main carnival celebrations take place on Monday (Luns de Entroido ) with A Farrapada and A baixada da morena as highlights. The first one happens in the morning and consists of people throwing dirty cloths to each other while the second one sees a huge ant descending to the main square surrounded by the most absolute madness I had seen in a long time around dusk. Flour, hyper excited mid size living ants and dirt are all thrown everywhere and to everybody during some crazy and ecstatic 15 or 20 minutes before the battle ends and everyone continues partying white-faced in a more decent way with some live music. SO. MUCH. FUN! 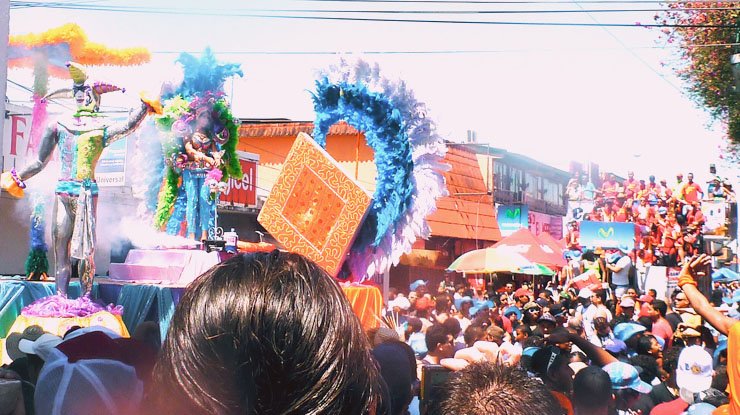 It’s hot, it’s humid, the music is insanely loud, people are dancing in the streets, all while being sprayed by water from tanker trucks. Welcome to Carnival in Chitre, Panama! Easily the best party I’ve ever been to, the town of Chitre attracts visitors around the world for their Carnival celebrations.

With parties during the day and all through the night, the city imposes mandatory rest hours from 4-8, both AM and PM, just so that people will take a break! Grab a group of friends, strap on your Camelback full of liquor, and prepare yourself for an insanely fun party (and a few beach days as recovery after)! 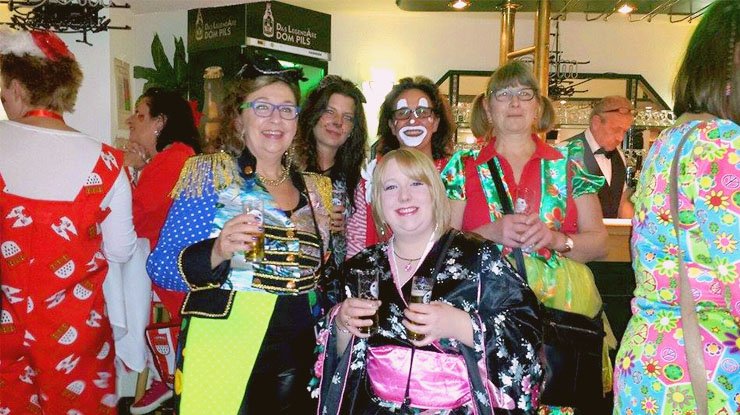 Many people attend carnivals as spectators. But I have been part of the carnival trains for many years now and want to give you a little insight. The preparations begin months before the event and look at how many people will make up the procession, which costumes will be worn, which goodies will be thrown into the crowd and so much more.

In November, are the applications and when everything is settled, we meet very early on Shrove Monday (when most parades begin), eat breakfast together and then get ready (put on makeup and clothes). Alcohol is consumed en masse. One hour before the start we get in line and party with the other groups to loud music.

The start is at 2:11 pm and the carnival procession walks through my town for three hours. The sweets are distributed to the audience while shouting ‘Helau’. Music plays an essential part, even though the songs are not very sophisticated. We dance, sing, laugh and drink. I personally love to walk the streets once a year and just have fun. Carnival is a big part of my life and I would not want to miss it. I cannot recommend such a spectacle enough. 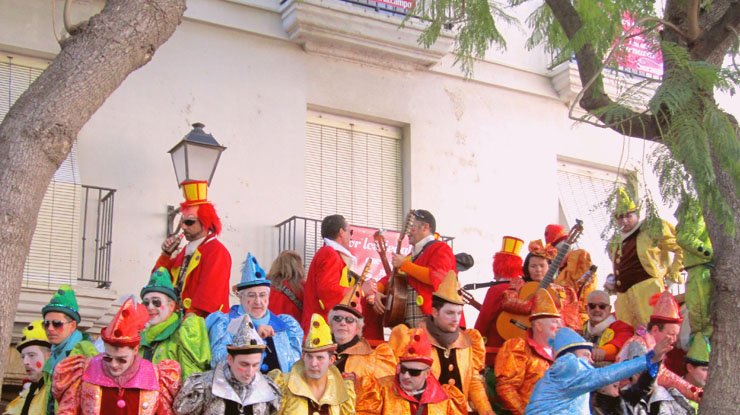 I went to the biggest Carnival celebration on mainland Spain in Cadiz, a port town in the south-western part of Andalusia. There were about ten of us who went and rented one hotel room and ultimately were kicked out because they caught us and we had to sleep on the beach. Therefore, my tip number one is this: Since most hotels in Cadiz are boutique-style, be careful if you try to sneak a bunch of people into one room.

Nevertheless, we had such a special time as we dressed up as Power Rangers and spent the entire night out on the town with thousands of people who had come in from other parts of Spain. My tip number two is: Regardless of how late you stayed out the night before, get up early the next day to see the main event which are the “coros” or singing groups performing in the main square. 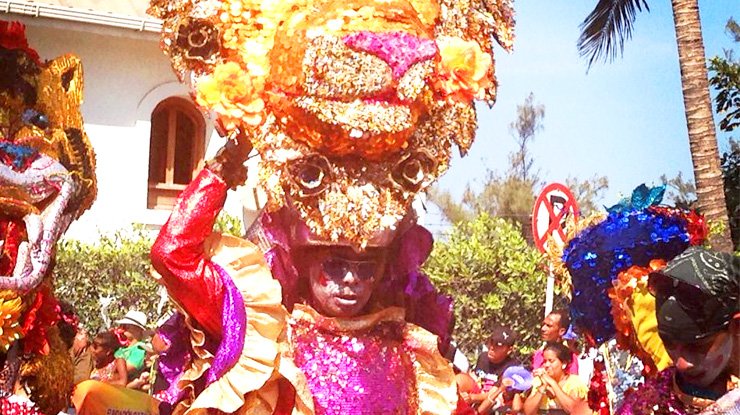 My favourite carnival celebration was in Barranquilla, Colombia. Despite being the second largest carnival in the world after Rio, and having a UNESCO Heritage Award, Barranquilla’s epic carnival is surprisingly underrated. In fact, few people outside of South America have even heard of it. I was lucky enough to attend the first day of this four day event, for the “Battle of the Flowers” parade which is generally considered the highlight.

The parade was amazing and lasted hours, with colourful floats and thousands of dancers, but what made the whole experience really special was watching the parade in the cheap seats with local Colombians, who were so welcoming and friendly. I made new friends, danced with locals, and joined in a city-wide foam fight. Such an incredible experience! 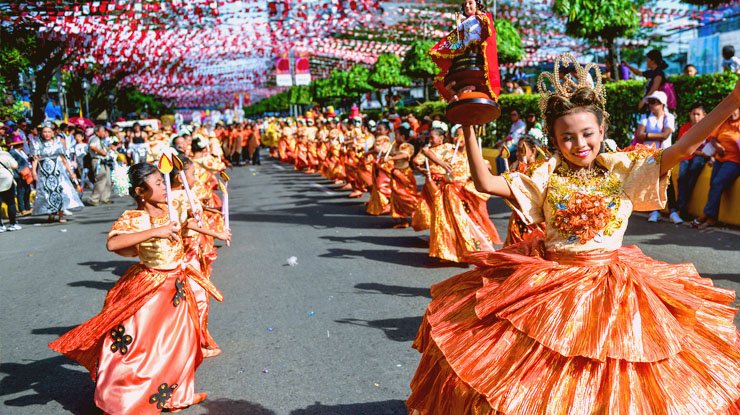 Aileen on the Philippines

Sinulog in Cebu, Philippines is an annual cultural and religious carnival attended by millions of people — in fact, it can reach up to 4 million! This basically commemorates the Filipino’s acceptance of Christianity and it is the center of the Santo Santo Niño festival in the country.

Held during the 3rd Sunday of January, Sinulog is a VERY lively celebration that lasts for 9 days in which the popular Sinulog Grand Parade will run for 9 to 12 hours on the final day. This parade is the definite highlight of this festival since it’s like ‘Mardi Gras’! There will be a long procession that consists of groups clad in colorful costumes, swaying to the signature Sinulog dance.

For more travel inspiration and to learn how to make it as a digital nomad, find Aileen’s blog as well as her facebook, twitter and instagram. 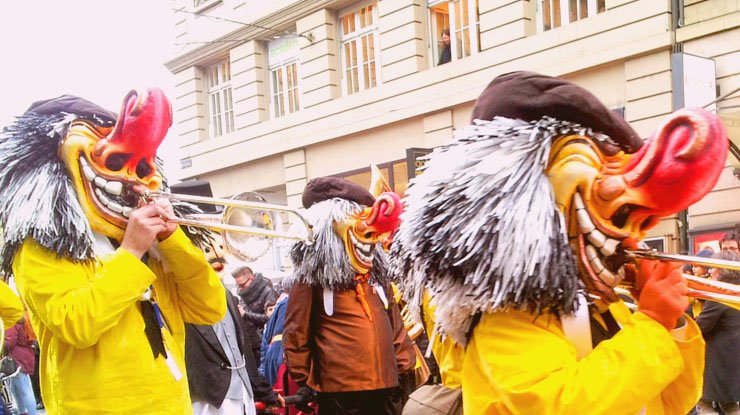 Basel, Switzerland boasts celebrating one of the biggest carnivals in the country each year- the Basler Fasnacht. While the exact origin of this festival is unknown, it is said to date back to at least the 1300s. Unlike the carnivals taking place in a few other cities, such as Cologne or Dusseldorf, for instance, not all visitors can dress up and participate in the Fasnacht and one can spot the ones do do practicing their piccolos and other instruments well in advance.

The Fasnacht commences at 4 am on a Monday morning, with all different cliques parading with giant lanterns and playing their instruments in a synchronized manner. This is known as the Morgenstreich, and each lantern depicts a current social or political issue of interest. Through those three days, you can attend a Cortège(parade), collect sweets and goodies from the Waagis, see marching bands playing the Guggenmusik, visit cellars to see different cliques perform satires and poetry regarding issues of current interest, eat Fästenwähe, Zweibelwähe, Mehl Suppe and also…be prepared to get attacked with confetti!

This can especially happen if you are not sporting a badge, showing support to the Fasnacht. I also love the costumes during the parades and some of the typical characters you are bound to see each year, whether it is the ‘Old Aunt’ or ‘Ueli’ the jester, or even the Harlekin.

Give Menorca a shoutout on her blog Europe Diaries and her social profiles: facebook, twitter and google+. 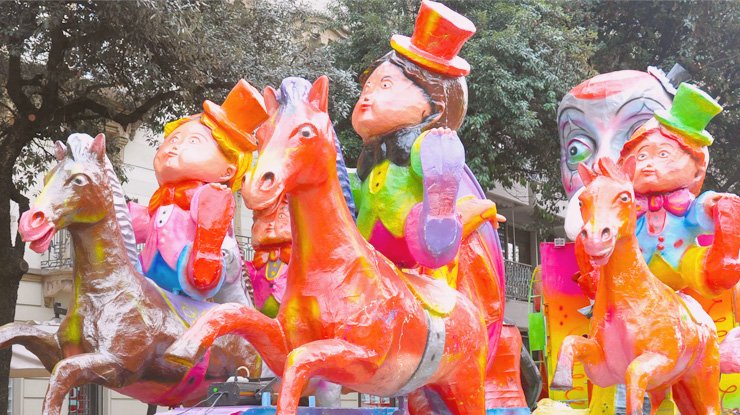 You see, the one thing that Verona has, which Venice cannot stage, is a huge parade with horses and marching bands, dancers and majorettes, historical and magical characters and, above all, fabulous floats. The parade takes over the historical centre of the city of Romeo and Juliet with booming music and gigantic figures of papier mache and leaves it covered with piles of confetti. It all happens on Venerdi Gnocolar.

In 1531 bad crops lead to starvation among the poorest citizens of Verona. At his deathbed a local rich man – Signore Tommaso Da Vico – gave orders for bread, butter, wine, flour and cheese to be distributed each year on the last Friday of the Carnival. To honour his generous will, the parade is lead by the Papa del Gnoco – a man with a long white beard who carries a big fork with a very large gnoco. There are no barriers between the parade and the spectators, so interaction is immediate. Everyone throws confetti at each other and later in the afternoon teenagers start flinging handfuls of flour at their friends.

Afterwards, take refuge in a nearby cafe for a frittella or two. These fried dough balls are one of the best Carnival traditions in the Northern Italian region of Veneto. Try the ones filled with creme patisserie or zabaione. Happy Carnival!

If you want to share your experience on carnivals across the world or maybe tell about how you get involved, I would love to read your story in the comments. 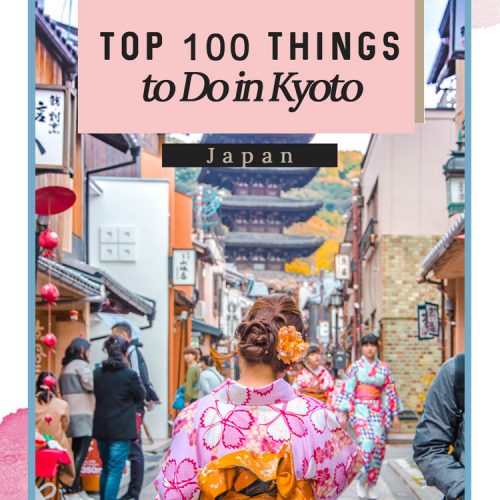 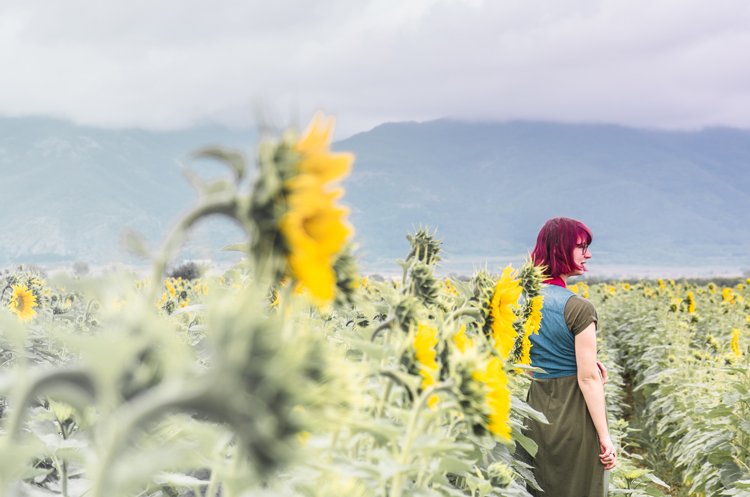 How (Not) to Celebrate July Morning in Bulgaria 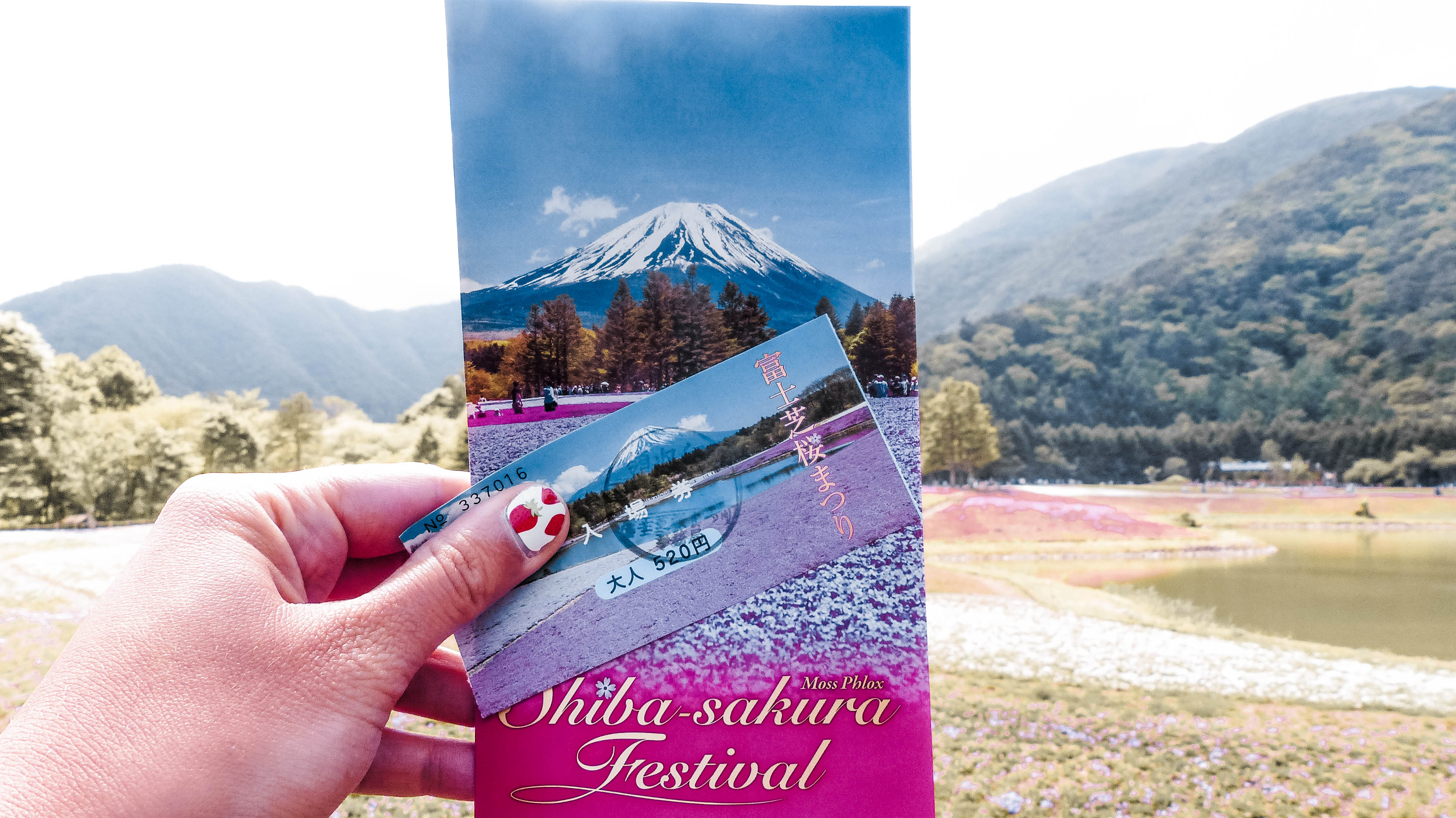 How to Plan Your Visit to the Fuji Shibazakura Festival