This post was sponsored. I absolutely cannot believe it. I saw my very first, very much wild echidna! It was just sitting there by the road. Unfortunately we couldn’t stop my sponsored trip with Bunyip Tours bus but I saw it and now I’ll tell the world!

The last time I had the chance to see an echidna I dramatically looked to the side to indicate my disappointment in not seeing one and missed it. Oh, life’s irony. But not this time! This time I kept my eyes fixed on the road like a mad person. Muhahahaaaar. Ehem. Not to bother you too much with my crazy, passionate outburst, I will go straight into telling you about the rest of my day with Bunyip Tours at Wilsons Prom. It wasn’t all about the echidna, after all.

**** This post came to be through a sponsored trip with Bunyip Tours. **** 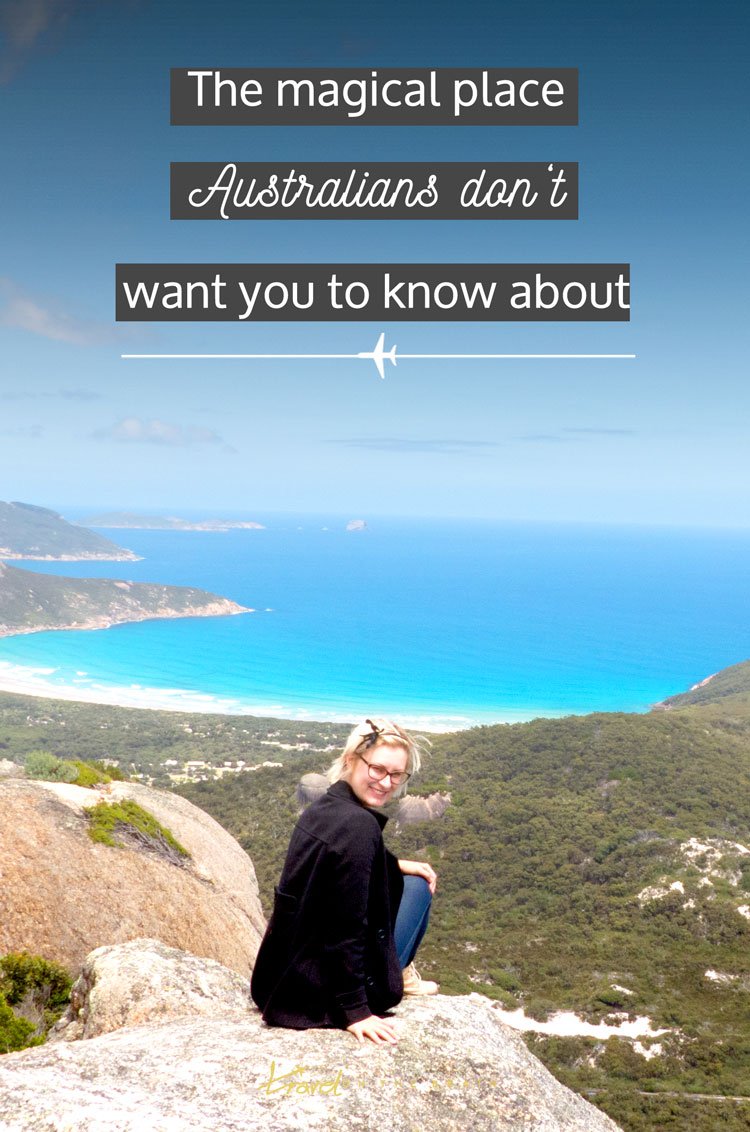 Off the Beaten Path in Wilsons Prom

Heading off from Melbourne in the early morning, we went straight to the highway and passed the country towns and rolling hill landscapes on our way to the southernmost point of Australia’s land. A quick stop in Foster allowed us to stock up on food since that was not included in the day tour and we quickly were on our way again and reached the peninsula after about a total drive of three hours.

The changing landscape was prominent and the meadows and typical gum tree lineups turned into a cool climate rainforest and coastal shrubbery. The colours changed as well with the green taking on a higher saturation, making the area look much lusher.

The rock formations also became more fantastical, revoking the memory of the Grampians with Mount Oberon and Kangaroo Island at Squeaky Beach. It all started to look familiar to me, bits and pieces reminded me of places I had already seen on my trips through Australia but never in this combination. It was really unique.

I can absolutely relate to the hype that surrounds the Prom. It is more of a local s secret with families choosing camping tours over a stay in the city during their holidays. In fact it has become so popular, that a lottery system had to be put into place to ensure a fair distribution of places on the 484 camping sites.

Families put their booking wish into the valet and then hope to be drawn to stay in the National Park for a couple of days. So now you know the secret, tell your backpacker friends about it! 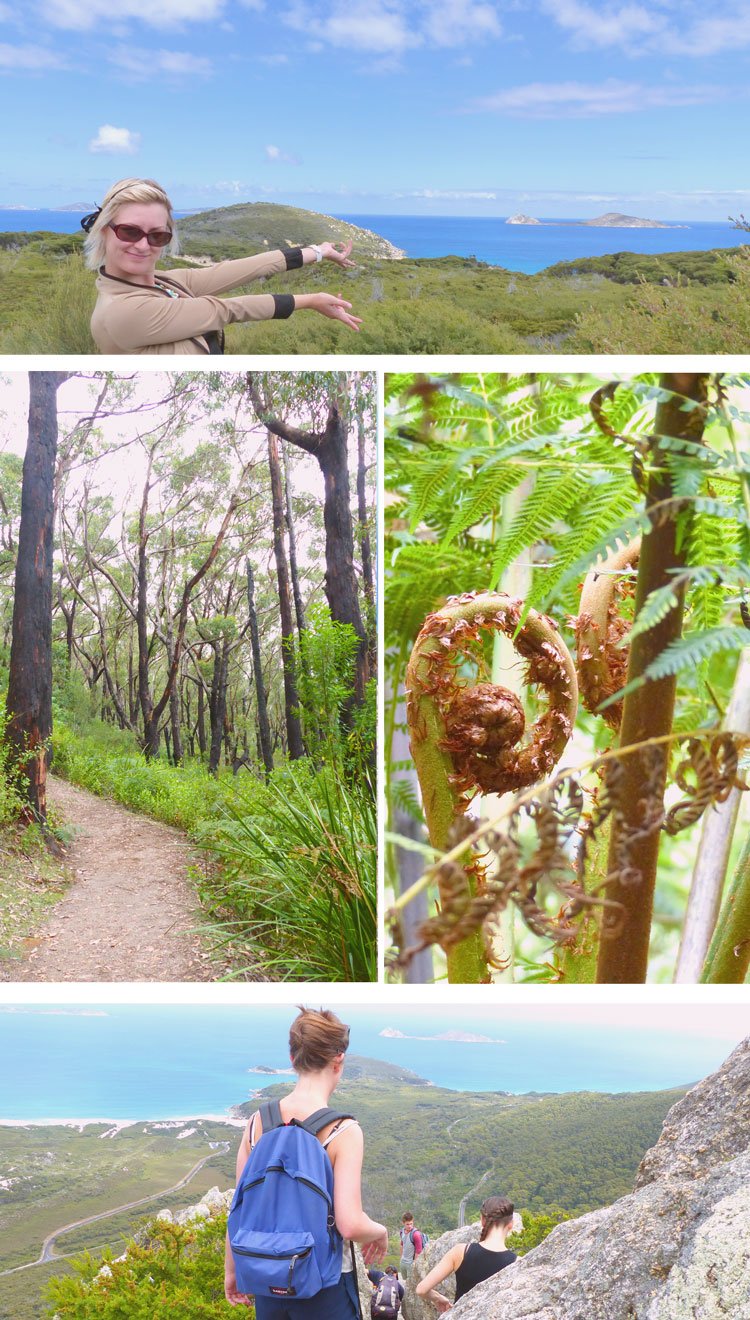 From Forests to Beaches

Needing to stretch our legs, we welcomed the hike to Mount Bishop. The walk was not difficult at all, just felt a bit draw out because the hiking path was rather low in angle and therefore quite outstretched but the view was grand.

Standing on smooth granite rocks with shiny quartz in them, we felt on top of the world and indeed with over 300m above sea level we had a pretty good overview of the western coast of the promontory.

From up here we could see the sapphire crashing blue waves, the two beaches with their light yellow and white sand and the paths we were to walk to get from one to the other with the Pillar Point in inbetween.

Off we went to the beach and set with our shoes underneath our arms and bare feet we commenced our beach walk. The sand was soft, “like baby skin,” someone told me and the weather cold but not chilly.

The landscape was already beautiful with the dramatic low hanging clouds, the skeleton white tree trunks holding up the green canopy and with a pretty bridge crossing from the beach over a wetland area and into the forest.

Walking among ferns and fern trees, we got a pretty good insight into how Tasmania must look like since the two used to be connected and are still showing a similar vegetation. As a consequence, Wilsons Promontory is quite different from the rest of Australia.

Thinking that, a little bird hopped by in the most shiny colour of blue. The superb blue wren had made an appearance and was gaily dancing about our feet, much like the New Zealandian fantail never resting for even a split second and teasing us with its shaking tail feathers.

It was the most adorable encounter today and once I had long anticipated since I saw a photo of such a bird on instagram. I guess, it was my lucky day. 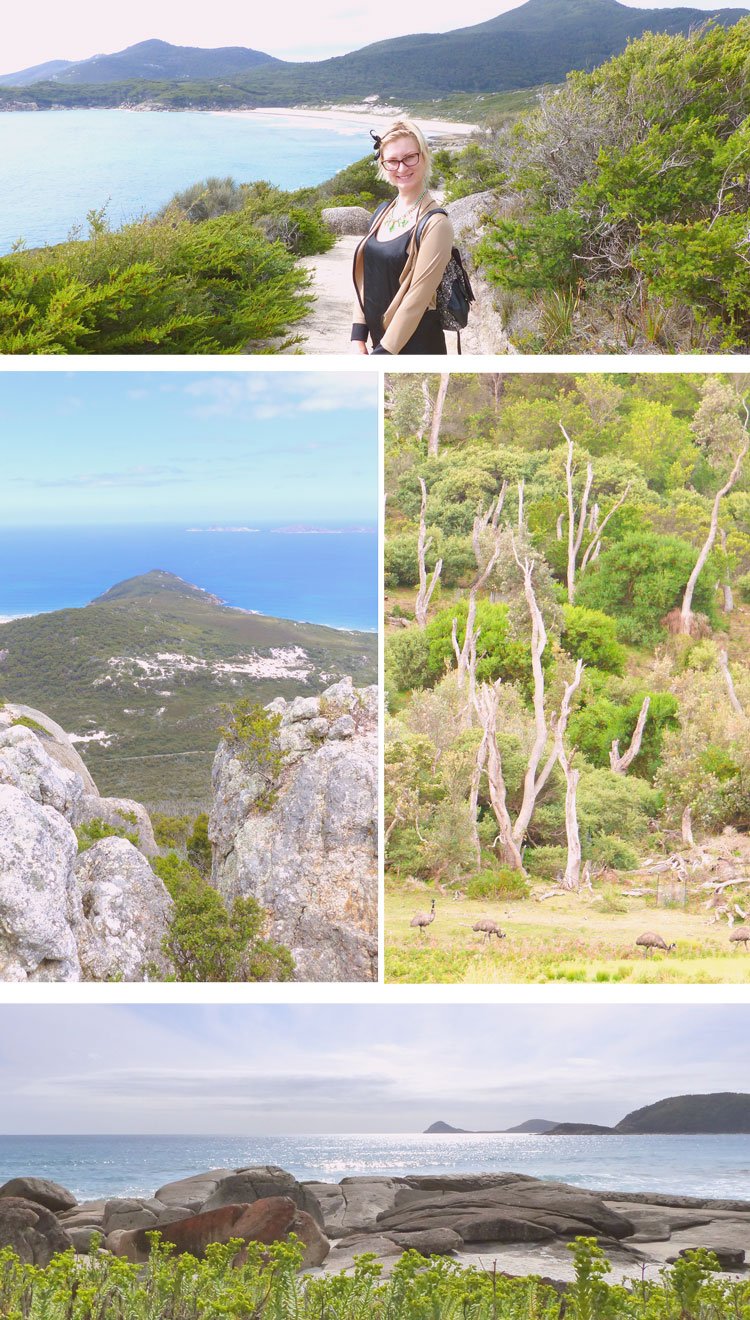 The Best Is Yet to Come

Our path led through eerie forests that could have inspired the night escape scene from Disney’s Snow White with its crooked and bending trees, peeling off and stretching out their branches in twisted ways.

I thought it was beautiful. The sand beneath our feet was white and the tree bits laying around were nearly black, which caused a nice contrast and just added to the mood of otherworldly places.

Stepping out into the open, we were presented with a breathtaking view of the beach as white as snow, the ferocious ocean gnawing at the shore and were especially enchanted by the one of a kind rock formations that left us guessing at the forces of nature over the enormous time span that shaped this part of the Australian continent.

Similar to the broken devils marbles in form and to Flinders Chase in colour, this part of the Prom was just magical and it did not take us long to scramble up onto the rocks to pose for silly pictures and look ridiculously tiny in comparison to the stones.

Our next part of the walk was along the squeaky Squeaky Beach. It was made of super fine quartz and made the sound it was named after whenever we ran or dug our heels into it. The weather had cleared up by now and with the glistening sand the sun quite blinded us and throw a thousand tiny reflections on the water that looked like diamonds.

Some of our tour where thus inspired that they had to get into swim gear and take a splurge at the sea. For me, it was too cold but the view of the rugged coastline took up my attention anyway. With this in mind, I dreamily stepped back onto the bus that took us back into the city, taking a longing for nature with us that would be hard to shake.