Over the past few months I rediscovered my passion for musicals. In a household that loved Disney movies but would have gladly skipped the bursting-out-in-song parts had I not protested vehemently, I was never really exposed to musicals. And I had no clue what I was missing out on! Luckily I had a very special insight at a West End show.

Got no time to read? Tweet it out for later or pin it.

Yes, I am obsessed with West End shows

I remember that there were only two musicals whose soundtracks I ever got to listen to growing up, which were Cats (as part of our music class) and The Lion King (because I got to borrow it from a friend. Ah, the good old days of physical copies). But because of that, I now have a pretty solid track record when it comes to watching musicals. 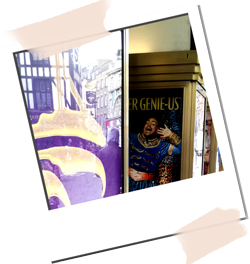 My first one ever was the timeless Phantom of the Opera I saw on Broadway in New York City, followed by a binge series of West End musicals during my short stay in London. I basically wanted to never leave the area (might as well, I was running from ticket office to ticket office nearly daily). My excitement even caught the attention of two stars of the spectacular Disney classic turned fabulous musical spectacle Aladdin on West End!

Being the fangirl that I am, I jumped at the chance to tweet back and what do you know, even secured a small interview with one musical actress/dancer of the show itself! Was I over the moon! And this way, I am proudly presenting a look behind the curtain and into the glamorous world of song and dance. 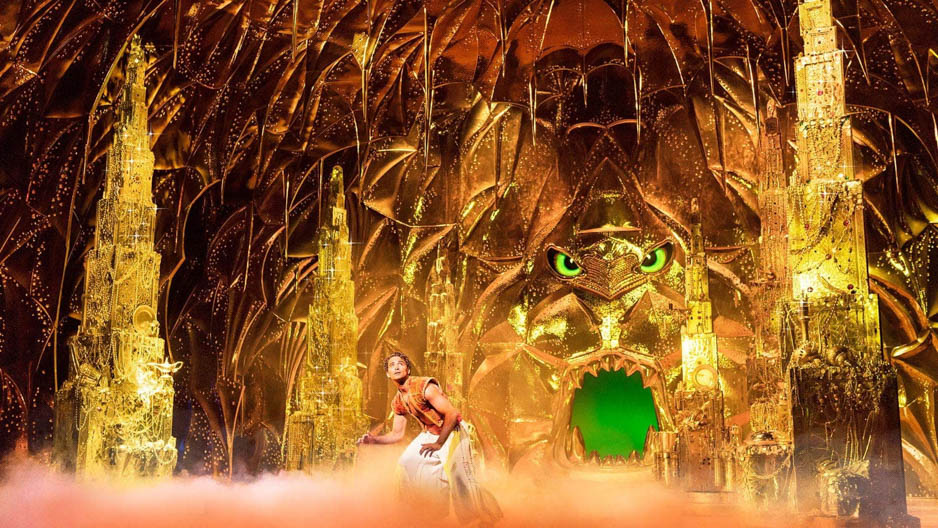 Who knew I had something in common with a musical actress/dancer? Bianca Cordice, Assistant Dance Captain for Aladdin had started dancing at a super early age, namely that of around three to four years! (I bet she never had to dance in golden glittery outfits to Barbie Girl though. Oh, the shame.)

Seeing her now all shiny and radiant on stage, you would never have guessed that it took a while until she fell head over heels with dance. “I came to my senses at age 8 and have loved it ever since. I love to move and love to sweat,” Bianca confesses. Giving it her all and mastering complicated dance routines have been her daily mana since then. “The feeling of accomplishing a dance move or routine and performing to an audience makes me come alive!”

It was this passion that landed her the dream role in the West End show Aladdin. “Anyone who knows me knows it had my name written all over it! It’s my kind of show. It has jazz, tap and showgirl elements, not to mention all the Swarovski crystals and beautiful costumes!” Hearing this, it makes perfect sense that the avid dancer lists Dreamgirls is her current favourite and cannot wait to see tap dance extravaganza 42nd Street of Royal Theatre Drury Lane (same here). 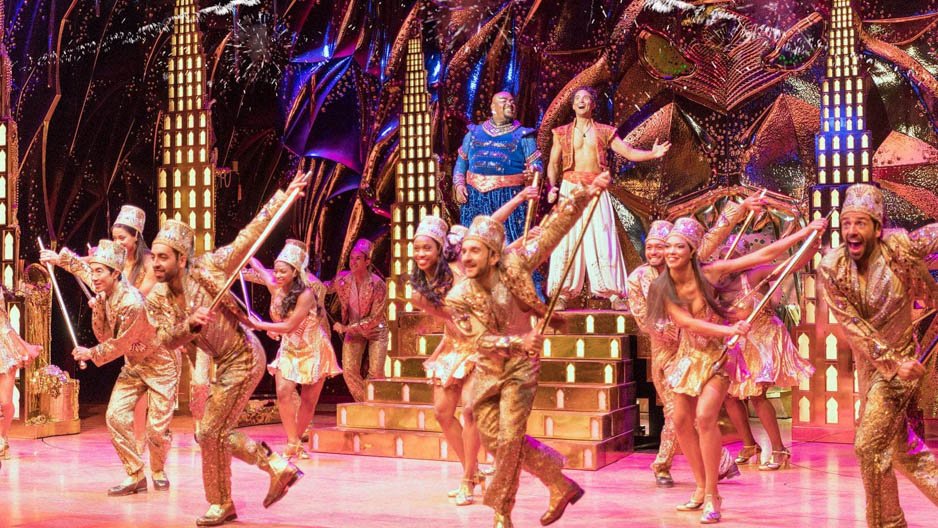 But what does it take to be on stage one to two times almost daily? “Just to prepare for a single show takes hours of preparation beforehand each day!” I had no idea, nor did I know that “[f]rom ideas to logistics it can take years for a show to be planned.” The rehearsal period in advance of a first showing can take up to six weeks and during that time, the cast not only has to learn their parts by heart but remain flexible as “the roles are always evolving and growing.” Thankfully, this “keeps it exciting each night!” 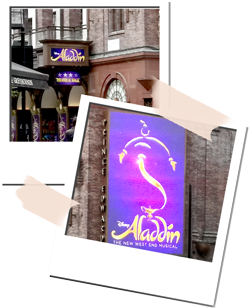 The final musical you will see on stage will be a product of various “trial runs and different versions before transferring to a larger stage with a finished product.” Just imagine all the different Aladdin musicals there are! Still, the Aladdin musical currently running in the West End is fabulous, to say the least. Bianca agrees, adding: “It’s going to be hard to top it, so I feel so grateful to have had this opportunity and experience.”

What makes the show so special is “the culture and dance styles within the show.” Constant costumes changes of all members of the ensemble (there are over 350 costumes!), colourful lighting and mesmerizing props that transform the stage instantly from distant deserts to gold dripping caves and an actual flying carpet in the night sky. (How on earth did they actually manage that?!) The show left me daydreaming for days. No wonder, Bianca has renewed her contract. “I am staying on for another contract with Aladdin West End, I’m not ready to leave yet.” 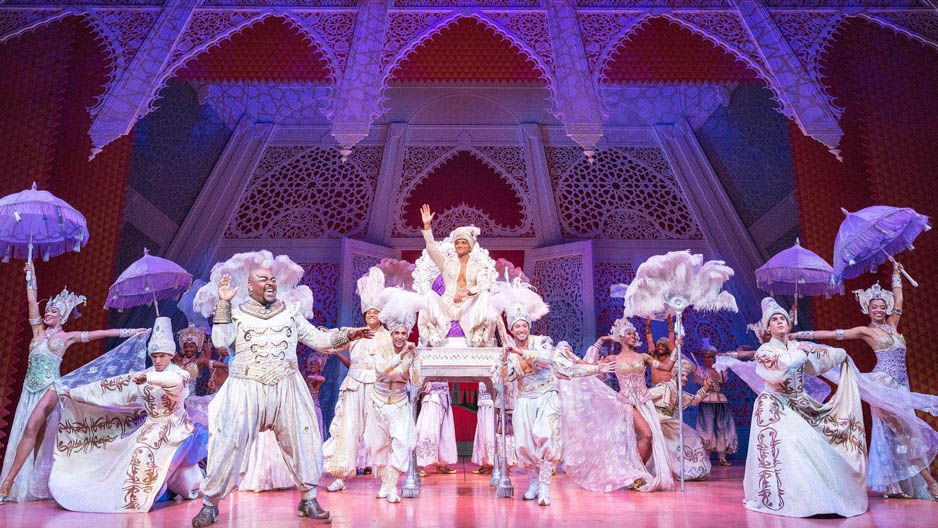 How to score your West End show ticket

If you are new to West End or even musicals, the dance enthusiast has a few tips up her sleeve for you. After all, with the enormous diversity in musicals, there sure are plenty of shows for “all ages, families, men and women. There is something for everyone.” Before you go, however, know that there is a variety of options when it comes to getting a West End ticket as well.

If money isn’t an option, you can just secure the best seats in the middle of the front (in the Stalls – on the ground – or the Dress Circle – one level up). There is even another level up, the Grand Circle, from where you can see the whole stage but from afar.

For small budgets, there are “sometimes day seats available from 10am onsite only, starting from £25.” (One of those I scored!) Should you be in London for a little longer and are flexible, there is “a lottery online for a limited number of £25 tickets, but this is not a sure win and you will need to select a few dates that you are available around about 1 week in advance.” 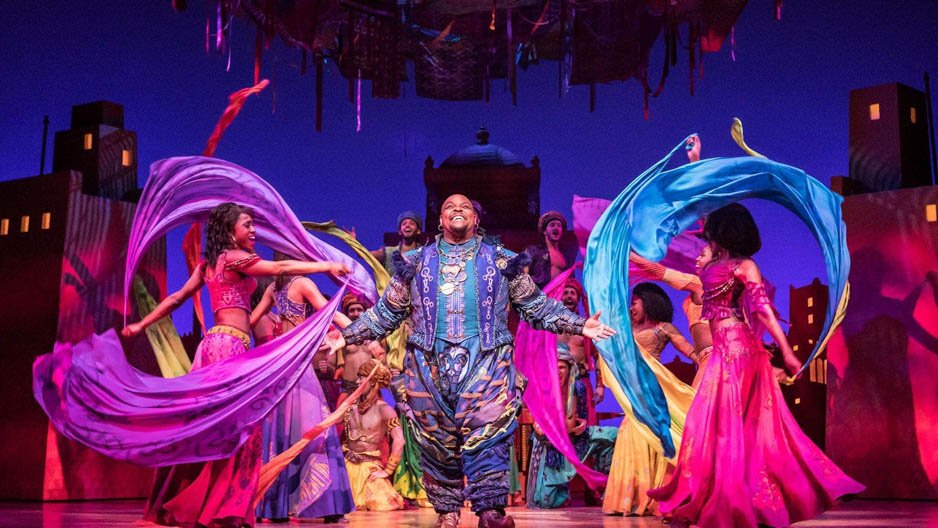 Where to go after your visit to Aladdin UK

Of course, no visit to London’s West End could be complete without pleasing your taste buds as well. It’s for all senses! If you are looking for a more subdued atmosphere, Bianca recommends Café Monico on Shaftsbury Avenue for a delicious meal before or after a show.
In case you’re inspired to swing your hips afterwards, “go to Hospital Members Club, where there are a number of floors. I mainly like to be in the chilled lounge on a sofa but nice to know I can have a boogie upstairs if the mood is right!”

Since the West End is relatively compact, you can actually walk around from Theatre to Theatre Between Tottenham Court Road and Charing Cross Station, it takes only 30 minutes by foot. Inbetween, you can find restaurants scattered everywhere as well as Chinatown. This is good news for Bianca. “Usually after a show I don’t want to be travelling far to meet friends so it is great that there are so many venues to choose from. Whether you are looking for a pub, cocktail bar or restaurant, there are atmospheres and cuisines to suit all.”

Whether you come to the area for a West End show or just for the thrill of walking the vibrant streets and dining out, you will be perfectly entertained. “London is so diverse, cultured, welcoming and creative and that feeds straight into the West End, so it can only get better!“

Over to you: Have you ever been to a musical? Or particulary a West End show? 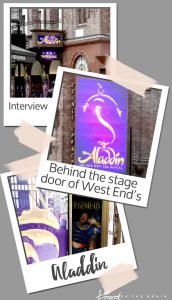 Had I not been so busy in London, I surely would have seen even more musicals. Well, if that is not a great reason to come back as soon as I can? Meanwhile, I will make do with youtube binging more soundtracks, musical shows and TV Series (Crazy Ex-Girlfriend!!). And yes, I have been listening to the musical soundtrack endlessly for the past weeks (and while writing this interview). It’s research, obviously. If you want to get your hands on it (and you should); here’s an affiliate link to the Aladdin (Original Broadway Cast)

Tell me: Have you ever seen a musical at London’s West End? Which one?

How to score super cheap West End tickets in London
Living in Brighton as an Artist
On Business in London? Where to Set Up Your #BossBabe Apartment | Sponsored
Where to Experience the London Christmas Lights
The Shocking History of Bath Jane Austen Didn’t Tell // Sponsored

Living in Brighton as an Artist
On Business in London? Where to Set Up Your #BossBabe Apartment