Adventure, where could I find you? Cardiff so far had not been on my travel list but since I was on my big UK tour kindly sponsored by Visit Britain and Visit Wales to see amazing spots for literary nerds like me, I thought I should rectify that and make a quick stop in the capital city of Wales. With the support of Visit Wales, I was soon roaming the streets and visiting as much as I could in the short time I could stay. Naturally, Cardiff castles were high on my list (or at least those in the vicinity of Cardiff). 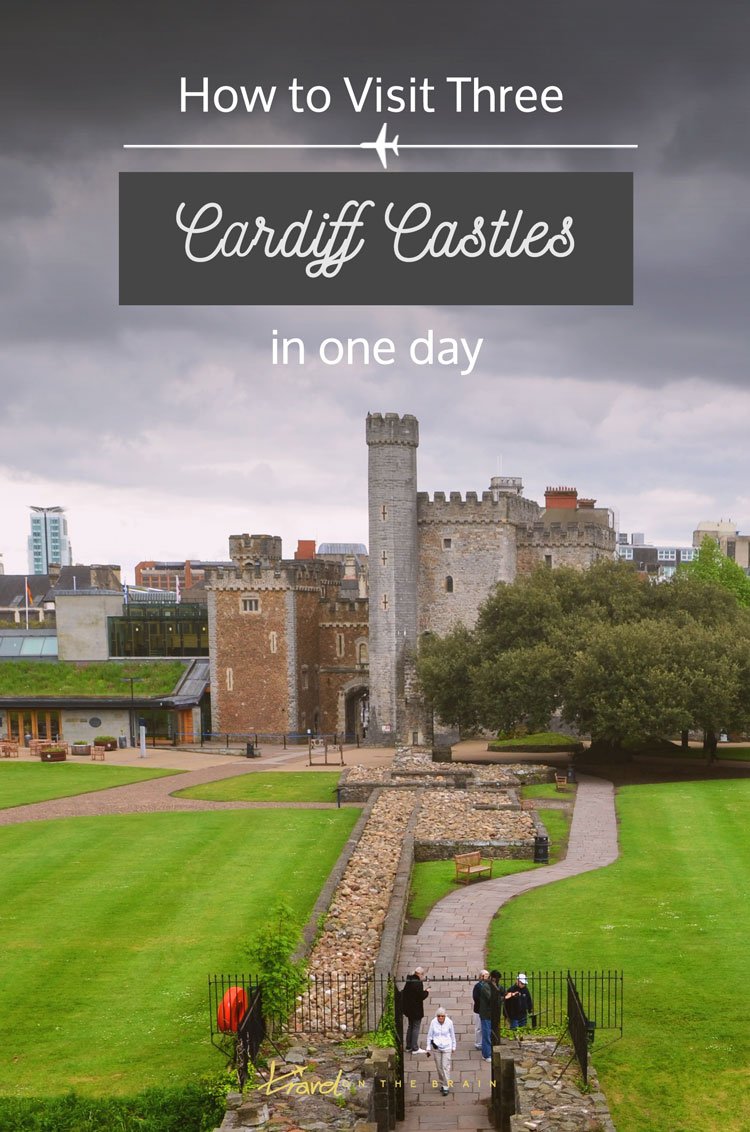 My first glimpse of the city somewhat reminded me of Melbourne. Old Victorian buildings standing next to glass and steel skyscrapers, modern shopping streets branching off into beautifully old-fashioned shopping arcades, pubs next to modern foodie meccas. And then there was the giant castle. Right there in the middle of the city centre. Well, that was certainly not Australian. And needless to say, I was magnetically pulled towards it.

Equipped with those little talking info gadgets (aka audio guides) I learnt about the eccentric Lord Bute, who had a great deal too much money and a head full of medieval romanticising and a passionate love for Cardiff Castles. He owned Cardiff Castle and loved to use it as his private little lordly party getaway. There was a small ‘less decorated room’ for when a guest party of up to three people paid a visit and a big hall for larger groups. Each was intricately decorated with painted wallpaper, carved furniture, lots of gold and a huge library of old books.

My heart broke a little when I found out that, to show off with a grand entrance hall, the Lord had his library size reduced. But he still had a heart, I found out, when, during World War II, he opened the castle walls as bomb shelters to the public and tore down holes into the walls for a quicker entrance. Everything was restored afterwards, but you can still see how the conditions of the quarters where back then and to the backdrop of bomb sirens and overhead aircraft, a walk through the damp and cold corridors sends chills up and down your spine. 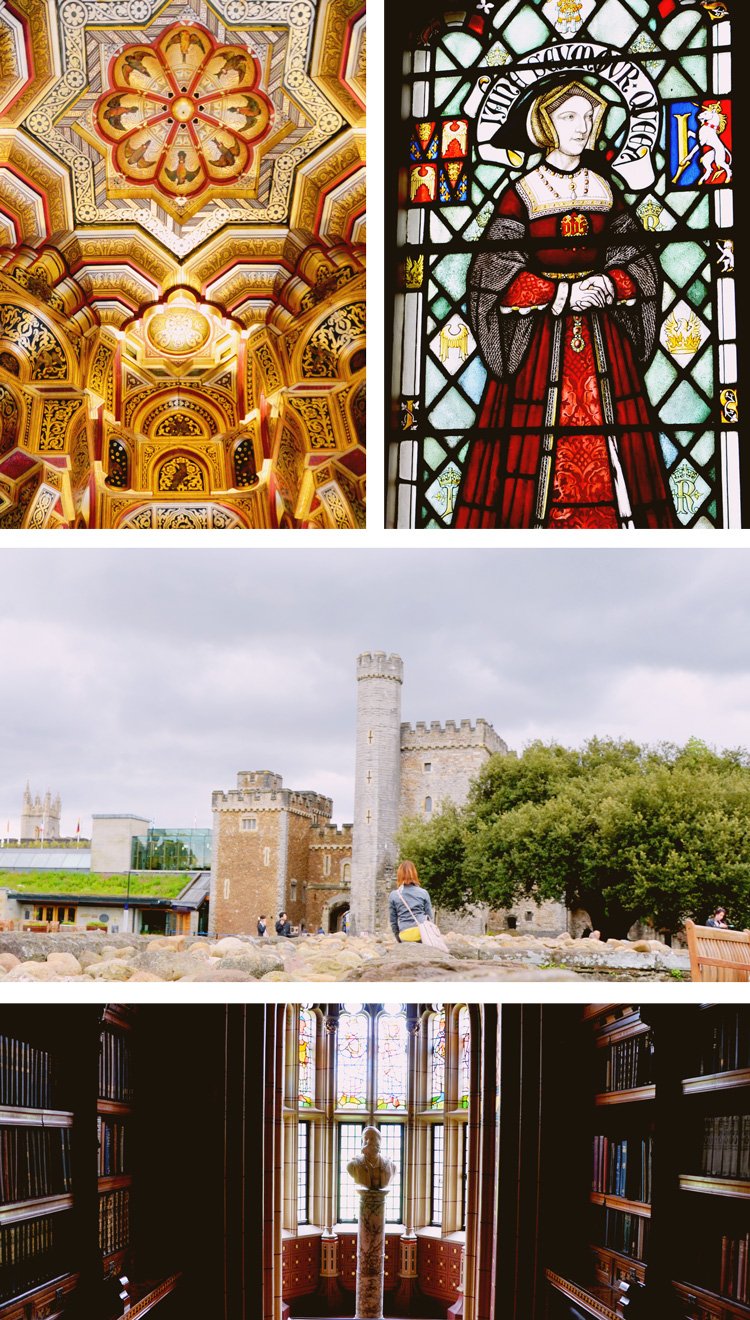 I left the dreary place and went for some fresh air up on the old Norman Shelter as the Tower in the centre is actually called. It is not a tower per se, more a shell to guard the castle inhabitants during darker medieval times and originally houses buildings and was made of wood. Neither stone nor wood could withstand time and it’s now all a ruin, but a pretty one at that with a pretty view over the city. Up here, I learned about the nearby Coch Castle and instantly resolved to make my way over there and make the day all about Cardiff Castles (yay for spontaneity!).

A ten minute walk to the station, a fifteen minute ride and a twenty minute hike through a muddy forest later I had arrived at the ‘Red Castle’ and it was all I could hoped it would be. Unlike Cardiff Castle, it had been fully restored to its old glory yet again thanks to Lord Bute and his eternally flowing money. Partnering with a visionary architect with ample time and a likewise passion for all things Middle Ages, he created another castle meant for a fun family getaway. And it was also used to quarantine his children when they fell sick. But to be honest, it was a great playground for never-quite-grown-up adults as well.

[su_service title=”Read more: Back to the Samurai with these 7 Must See Castles in Japan” icon=”icon: plane” size=”22″][/su_service]

Armed with another audio guide on Cardiff Castles, I could listen to some background information and find hidden artsy puns on the walls (a frog with a bottle of medicine against the ‘frog in your throat’) or aimlessly walk around the little castle, discovering rooms and vaults as I went. It was quite fun and I felt adequately silly running up and down winding stone staircases and peeping down from the tower top. But I could go one step further (not literally, it was rather high) and so I raced over to Wales’s biggest castle in Caerphilly. 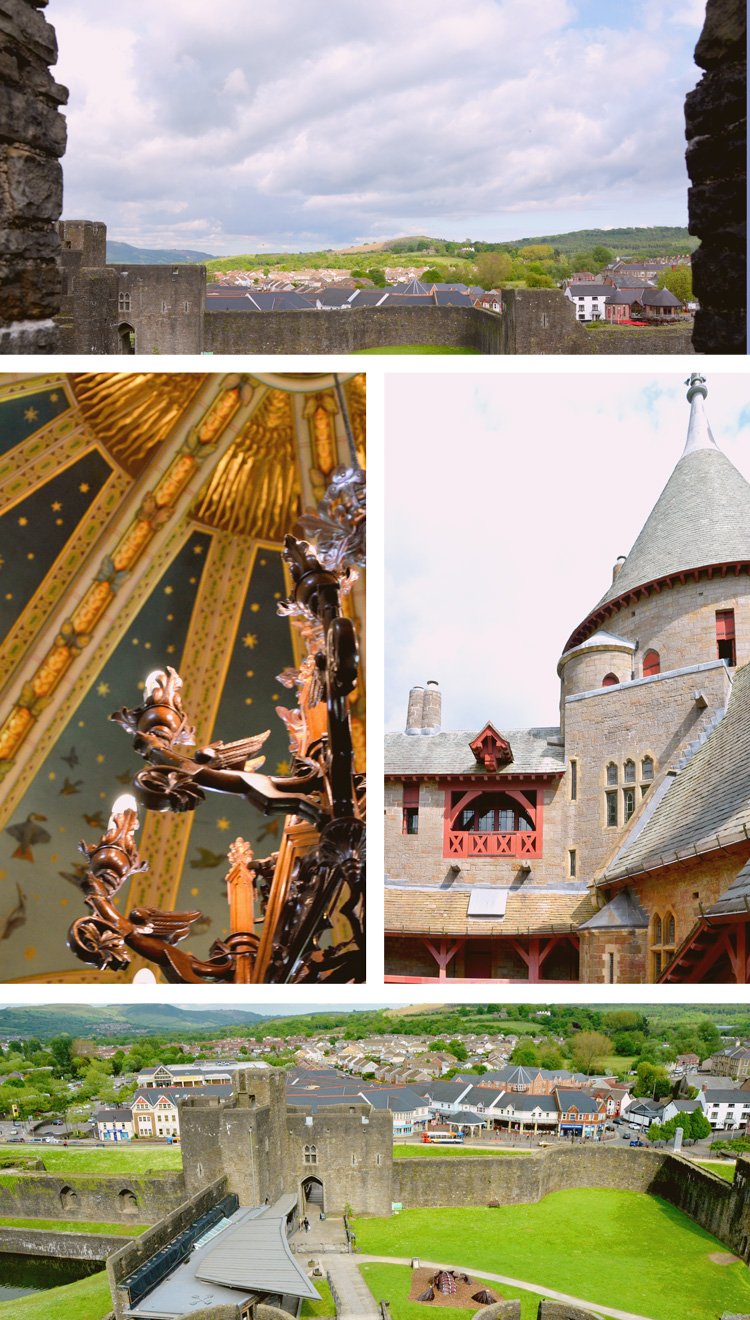 (Near) Cardiff Castle #3: I Capture the Castle

An hour later I had just made it before closing gate time and was running around like a Lady Macbeth (aka madwoman). The good thing about reaching a castle late is that you pretty much have it all to yourself. Tourists were leaving and guides were waiting at the entrance (editor’s note: I did not overstay my welcome and arrived back in time) and the castle was all mine, MINE!!!! I said so on top of the highest tower and clutching my scheming hands erupted in evil laughter. Give me a reason not to! I dare you. Muhahahar.

Flitting from tower to tower, crossing old balustrades and doing a little jig in the living chambers underneath the high wooden ceilings, all I needed to complete my ‘time travel’ was medieval music (does anyone have some good recommendations for a playlist?) and the proper attire. But alas, that was not possible. And with a look at the time and a sad glance over the battlements of the last of my Cardiff Castles, I began my slow descent into the real world again.

To pick me up and fill the big hole that had started to grow within me (both my heart and tummy), I headed for a regular looking pub – not one of the modern franchises, fie! – and ordered the first Welsh thing I came across. Rarebit it was and rarebit I got. Unless other Welsh words in my experience, this one was pronounced the way I thought it would (phew, no embarrassing mumbling on my side) and I soon devoured my roasted sandwich with mustard sauce and a poached egg on top.

Remember, if you want to follow my adventures live as I go crazy roaming old Cardiff Castles, getting stuck in mud or my other shenanigans, you can find me on twitter and snapchat under travel_brain.

My visit to Wales was made possible thanks to Visit Wales. Still, my opinions and crazy impromptu ideas are entirely my own.

The Shocking History of Bath Jane Austen Didn’t Tell // Sponsored
Brexit & Travel – What Will Change for UK and EU Citizens?