Have you ever heard of the spooky Taman Festival Ghost Town? Originally being constructed as a massive theme park in the hopes ot lure throngs of tourists to already busy Sanur in Bali, it has become derelict. And why not? It was never officially opened. So what happened and why should you visit? Here are 12 answers.

How to Get to Taman Festival?

Get yourself over to the Sanur area but not to Sanur Beach. It’s a little bit further up north so drive northwards from the crossroads towards Sanur Beach. At the next crossroads, turn right and head straight to padang galak beach.

You can already spot the skeleton of the main hall from afar and know you are on the right path. Before you reach the Taman Festival Park in Bali, you will be charged 2000 IDR for access to the beach area.

Right after that, you will see the entrance to the park on your left. If you want to park right in front, the security guards will guide you up to the unofficial bike parking area. They charge 10,000 IDR..

To skip those fees, drive straight to the beach and park there and walk back or sneak in from the trail by the beach.

If you look closely from Sanur Beach (where ferries to Nusa Penida leave), you can spot the skeleton rooftop of the abandoned theme park Taman Festival in the distance.

Behind the scenes: My friend Wander with Jo published her account of all the weird things that happened during our visit. Read here.

How Much Is the Entry Fee to Taman Festival?

The site is abandoned, so there is no actual entrance fee. It is free to roam. However, since it’s on private property, the local security guards might charge you. (Which is probably why they charged way too much for parking.)

Why Did Taman Festival Never Open?

It’s not entirely clear. The theme park Bali Taman Festival was built with high hopes of it being a serious competitor to Disneyland. Around 1 trillion IDR were invested by businessman Bambang Pangestu and the Indonesian government.

But it never officially opened. So what happened? Apparently two things. Number one was that the main attraction, a $5 million laser show for night displays was struck by lightning (on Friday 13 in March 1998 no less). The insurance didn’t much care to fund a replacement.

With that attraction gone, supplies for the erupting mini volcano still not anywhere near in sight and the Asian economic crisis hitting, the reduced tourism to Bali didn’t warrant running such an expensive theme park in Sanur.

In 2002 the Bali terrorist attacks made sure that any potential plans of looking into reopening were definitely over. I’ve also read that fire struck on December 10 in 2012. In either case, Bali Taman Festival went bankrupt in 1999 and the park was closed in 2000.

If you ask locals, the theme park was absolutely great. There was a short soft opening in 1997 where people could actually visit during the height of its time. It had the world’s first inverted roller coaster, Bali’s biggest swimming pool, 3-D theatres, a cinema, mini volcanoes, laser shows, a wedding chapel, restaurants and zoo.

The ownership of the site remains unclear. It seems that the Balinese government was fighting with another businessman, Hartono, who got the ownership papers through an auction by the bank who had lent the money to businessman number one. I’ve also heard that demolishment and construction of a skater rink are currently underway.

What’s Up with the Rumoured Crocodiles at Taman Festival?

On the site of Taman Festival, there was also a Crocodile Park. Again, there is some uncertainty here. Some say it was part of the Taman Festival Theme Park, others say it was put up after the theme park failed to use the site.

Either way, the Crocodile Park proved uneconomical as well and was abandoned. The crocodiles were still there however, and only rescued to a zoo later. The story goes that the locals fed them with chickens and dead animals for a while. Then the crocs turned cannibal and some might have escaped.

Well, if you believe locals, abandoned places are perfect breeding ground for evil spirits. As such, many avoid them for fear of being haunted.

While it is said that Bali’s famous horror festival park is haunted, some locals think otherwise and even go jogging here (Definitely safer around potential spirits than being hit by scooters or falling into potholes).

To reassure you, I didn’t hear about any specific haunted tale or dramatic event that happened post closure. But who knows?

Are there tours to Taman Festival?

Since it still is a more under the radar spot, there are no official tours. However, if you are discussing a day trip with one of the local taxi drivers, you can always ask for this stop to be included. They might even know a little more or chat with the security guards to give you more insights.

What Animals Are at Taman Festival?

The site is abandoned so there might be wild animals about. We didn’t encounter any other than creepy crawlers and a snake that fell from a beam. Be really careful where you step as animals might be hiding under leaves and debris.

Also, I got attacked by red ants three times and they refused to let their fangs go off my toes. That hurt quite a bit. Mosquitoes were also rather active. Some sparrows were flitting around the trees and there are big spiders and bats as well.

Don’t forget about the crocodile(s) that is said to have escaped either.

The site is in ruins. To make something out of it would basically require it to be demolished as the constructions aren’t safe anymore. The site isn’t shut off either, there are no fences, only two security guards we encountered.

Besides them, we saw a few other tourists about and one local guy who followed me and my friend Jo from Wander with Jo around the entire time, pretending to just coincidentally walk everywhere we ran off to. Right…

The park is currently being reclaimed by nature. Gnarly trees are throwing their vines around, roots break up the floor and bushes grow over doors. It is sublime in its decay and rebirth. Like a modern ruin in a jungle.

What Can You see at Taman Festival?

Don’t expect derelict theme park things at the Taman Ghost Town in Sanur. Whatever was there has been removed. All you can see are skeletons of buildings, an Olympic sized pool overgrown with weeds and plenty of graffiti.

Some buildings have never been fully completed, others are falling apart. There is also some localized demolishing going on. Overall, the constructions are somewhat fragile so take special care if you decide to venture into the buildings (maybe don’t)!

If you look closely, you can find signs of what each area houses, such as the theatre, the crocodile pool and more. While most of the 8-10 hectares have been reclaimed by nature and you really need to stay on the path for safety reasons, it still is quite big where you can walk around freely.

Is Taman Festival good for Photos?

Apart from the eerie beauty of nature embracing the concrete – jungle meeting concrete jungle – the graffitis are well worth the trip. It’s not just tags and smears but actual (albeit small) murals and portraits.

The street art around Taman Festival Ghost Town is ever changing but the four-tongued spirit near the entrance and hovering owl in the Great Hall seemed to have endured over the past years.

There are so many great opportunities for taking photos as it’s quite sheltered from the street, there are no crowds in your way and you can actually take a walk in nature. That’s often hard in Bali as so many places are rice fields, dirty beaches or busy country roads without a sidewalk.

What to Pack for Taman Festival?

Please wear sensible shoes at Taman Festival even if Sanur Beach is close by. My flip flops were a dumb idea. There are so many shards, tricky roots, aggressive ants and snakes about. Closed shoes are your best bet.

Oh, and if you are a germaphobe like me (or just want to make sure after touching things around Taman Ghost Town), pack hand sanitiser. Maybe even plasters in case you hurt yourself. (Or are not longer used to wearing closes shoes.)

Definitely apply insect repellent and sunscreen plenty. I was happy to have my sunglasses on me as well even though many areas were shady. But the Bali sun can be super bright.

Speaking of harsh sunlight, pack a polarizing filter for your camera to really get the sky’s blue out. It makes for a great contrast with the jungle green.

There is no kiosk or convenience store nearby, so bring your own water bottle. You will want to spend quite some time here and it’s easy to sweat a lot. Don’t forget to hydrate!

Read this too: What to Pack for Bali – Female Vacation Edition

Should You Visit Taman Festival?

Well, do you like urban exploring? Do you like graffiti? Urban decay? I personally love abandoned places and there are so many creepy areas in Bali, this one was definitely top of my list.

This abandoned theme park in Sanur really ticked all the boxes and left me super happy afterwards. It really is quite a big space to explore and you are entirely free to do so. I’d say it’s totally worth it and not even in a remote area. 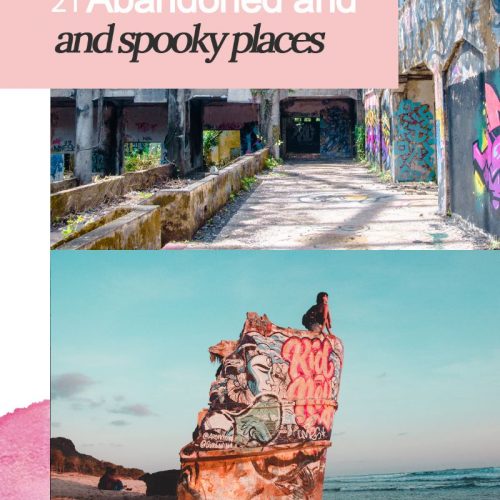 21 Spooky, Haunted and Abandoned Places in Bali for Creepy Outings 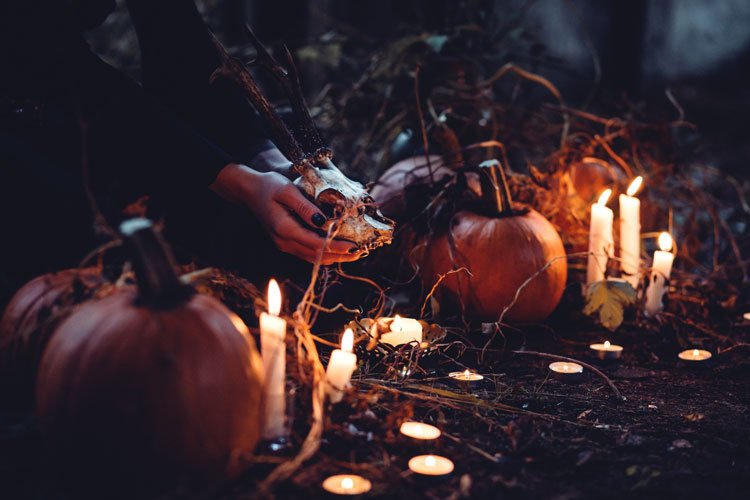 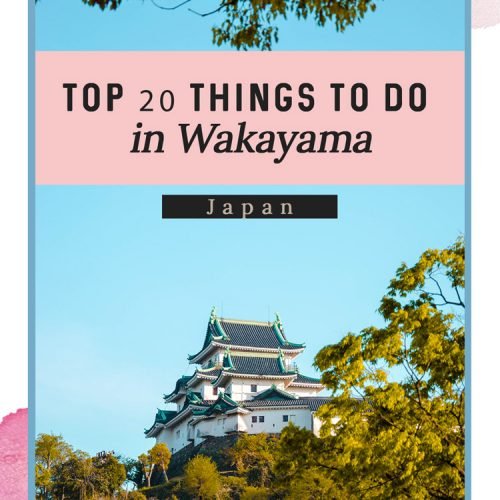 Top 20 Things to Do in Wakayama