[sponsored post] I was scheduled for a Ruhr Valley dump tour and I didn’t quite know what to make of it. What do you see on a dump?

Was dump hopping a thing I’ve been missing out on? I was about to find out as Ruhr Tourism had invited me over to show me all the quirky cool places the Ruhr Valley has to offer. And there are quite a lot.

**** My trip was sponsored by Ruhr Tourism. This post contains affiliate links. If you book anything from them, this doesn’t cost you anything but might give me a little commission to help keep this free blog full of more travel tips and me fuelled with chocolate to keep writing. As an Amazon Associate I earn from qualifying purchases. ****

If you didn’t know, the Ruhr Valley, located in the Northwest of Germany, was the centre of the country’s industrialisation. It was here that chimneys fumed, streets blackened and masses of workers filed in and out of giant factories.

In fact, the cities in the area built entire districts to lure and accommodate their labourers. You can still visit them (just don’t go inside as they have been renovated and are occupied).

It’s this image that clings to the German people’s imagination like the grit underneath grimy work shoes. Bad air. Smoky skies. Grey in grey. Funny how fast things can change but clichés only do slowly.

Nowadays, the agglomeration is rather green and finding a working steel factory quite a challenge if you don’t know where to look for.

Old factory grounds have been reclaimed by nature and landscapers. When the coal was dug out from the deep channels underground, the debris and broken rocks were piled up on large mounds.

The Ruhr Valley originally was entirely flat but will all these mounds that started appearing only in the 60s, the views were altered. Now you can go rock climbing or mountain biking.

Sure, it’s not the same as with as actual mountain, but the Ruhr Valley mine dumps have become insanely popular as recreation grounds. There are over 100 mine dumps, slag heaps and tailings in total!

An entire day is not enough to see them all. Me and my guide from the Landscape Park Hoheward tried and optimistically aimed for seven dumps but only saw five.

They are spread far and wide but since the area is not too big, they are easily reachable. You can walk, climb or (mountain) bike them and apart from fantastic views over the whole area and city skylines, you’ll be stunned by art.

For one, there is the world’s biggest miner’s lamp, glowing in fierce red. If you come visit at night during certain hours, you will see it illuminating the entire hill, bleeding out the red light that used to keep miners (somewhat) safe. On certain days, you can even climb up to the viewing platform of Das Geleucht.

If you are looking for specific types of artworks on the respective mine dumps, check out this website listing all the Ruhr Valley slag heap attractions.

The highest accesible Rhine Valley dump is the Halde Daniel, which shows a row of 100 totem poles that even had a cameo in a Wim Wenders film.

For skiing and paintballing no matter the season, check out the Halde Prosperstraße, which is built onto an old mining pit.

Stairway to Heaven – For Real

For the world’s only walkable rollercoaster, visit the Tiger and Turtle Magic Mountain. Here, you can find stairs winding in on themselves with a height of 20 metre.

You can even walk them! Of course, not all the way to the top. Unless you have superpowers. (But even then it would be off limits, ha!) By the way, at night the stairs are illuminated in a bright white.

For more straightforward stairs up to the sky, try the Tetraeder . The upper stairs are (purposely) shaky, so better not come if you have vertigo.

When you visit, definitely take a good look around. You will be able to spot the skylines of nearby cities like Essen, Dortmund and Bochum.

After all, the whole area is a big agglomeration and cities easily blend into one another. In fact, that’s why the iconic yellow German town signs were invented, I’ve been told.

By far the most stunning piece of art of all these Ruhr tailings is the Horizon Observatory . It is practically a modern day Stonehenge.

By standing directly in the middle, it is possible to observe all kinds of astronomical phenomena, including solstices. Depending on the season, you can see the exact position of the sunset predicted (and fulfilled) as well. Its two arches reach up to 45 metres and might look simple but are quite impressive.

The mine dumps of the Ruhr district aren’t the only cool converted and recultivated places to explore. Giant factory grounds that were slowly falling into disrepair have been reclaimed and made accessible.

But the rusty pipes and cast halls of the ironworks don’t just look fascinating and sublime. You can do all kinds of activities here! Why not dive into a former gas holder tank or do alpine climbing in an ore deposit?

Or party in a storage hall? At one point, the Red Hot Chili Peppers gave a concert at the Landschaftspark Duisburg -Nord.

Besides all the crazy things, concerts and events that you can attend throughout the year, the whole landscape garden is freely accessible.

If you really want to discover every inch of it, you can stay at the hostel on the vast grounds. After all, the former factory workings resulted in exotic flora being imported.

You can find flowers that are usually blossoming in South Africa, for instance. For a general overview, climb all the way up an old furnace.

There are many information boards for in depth insights if you want to get your educational fix. For even more industrial wisdom, hit up the German Mining Museum (DBM) in Bochum.

To walk around a former and still well preserved mining pit, stop by the Hannover Colliery . It’s free and from afar you might mistake it for a medieval building.

Its pithead tower is actually quite pretty to look at. If you’re down, rent a bike at the Westpark near the Jahrhunderthalle Bochum.

How to Get onto the Ruhr Valley Mine Dumps

It’s possible to drive to most of the industry dumps in the Ruhr Valley yourself, but you will still have to make your way up.

You can walk, bike and sometimes even climb. There are different types of trails to choose from. However, you can ask the Hoheward Visitor Centre for permission to drive all the way up.

This is especially handy if you have a disability or are confined to wheelchairs or crutches. Alternatively, why not join a guided tour? The centre arranges those as well. A tour to one Ruhr Valley mine dump takes two hours and you can pick which one you’d like to see.

To visit the landscape parks, you do not need to arrange anything unless you want to take part in events or activities.

The theatre performances at the Jahrhunderhalle Bochum in particular were highly recommended to me. At one point, they dropped an old tractor from the ceiling for dramatic effect. So crazy!

I would like to thank Ruhr Tourism and Hoheward Landscape Park for showing me around the Ruhr Valley Mine Dumps and introducing me to their fascinating history.

More from the Germany blog 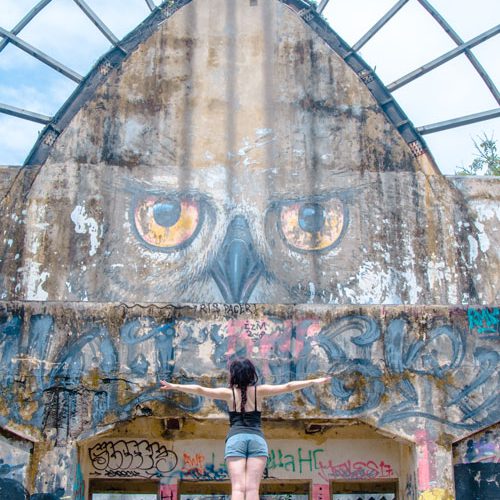