[sponsored post] I come from an apparently rather obscure little (actually quite decent sized for German standards) state in Germany called Thuringia.

We used to be trending in the 1900s but now whenever I travel I have to give a quick geography lesson. So maybe its excellent hearty German cuisine will put it on the map? Ever heard of German potato dumplings? Thüringer Bratwurst? Sigh.

Ok, let’s get down to it because you WILL need to visit any restaurant in Erfurt after having read all the yummy reasons why. A word of caution: don’t read hungry. (Pin it for later).

**** This post is sponsored and contains affiliate links. If you book anything from them, this doesn’t cost you anything but might give me a little commission to help keep this free blog full of more travel tips and me fuelled with chocolate to keep writing. ****

This Erfurt restaurant is the reason the medieval synagogue still stands today. The religious site was forgotten over time (and therefore not demolished) but the reputation of the German dumplings served in Feuerkugel still linger. You can go in and try them, traditionally in gravy and with a side of red cabbage. Prices for this dish start at 8€, which is a great deal.

[su_note note_color=”#fcdade” text_color=”#ef7583″ radius=”0″]WHAT TO EAT: Rinderroulade mit Rotkraut und Kloß
This is THE staple dish for Thuringia and one I NEED to have asap every time I return home. It’s a matter of life or death. Thuringian cuisine isn’t very vegetarian friendly and so you will get a nicely spiced and rolled up roll of mustard and onion filled beef. The side of Thuringian dumplings dish is fermented red cabbage and at least one big dumpling, sprinkled with finely chopped parsely. Add a giant helping of fresh gravy on top (and a saucer on the side for more) and there you are.[/su_note] 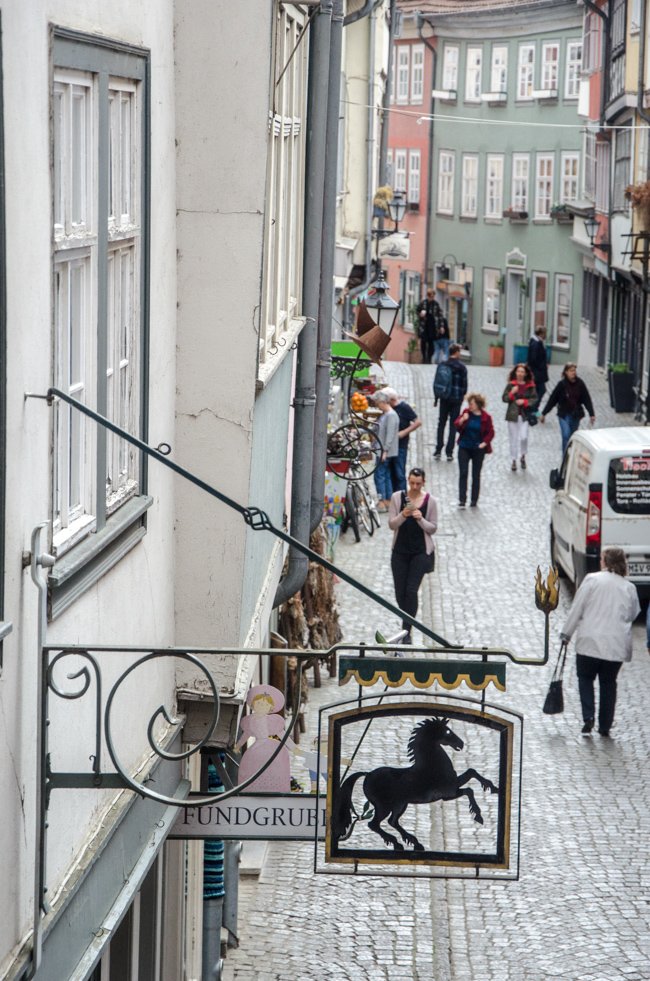 To dine in one of the oldest and most important profane buildings and restaurants in Erfurt, reserve a table at Zum Goldenen Schwan. It has a very traditional charm and houses its own brewery. If you are into architecture at all, admire the late medieval ceiling construction. The building is made up of three parts and the oldest dates back all the way to the 12th century.

This little cafe in Erfurt next to the river creates its menu items from fresh, regional products. Sit inside in the charming interior of Füchsen or outside in the biergarten. When days are cold and rainy, why not try a warming, housemade soup?

A fancier but still rustic regional flair can be enjoyed at Kromer’s. At this restaurant in Erfurt, regional Thuringian dishes are modernly interpreted. Sit outside in the biergarten or get comfortable down below in the vaults. By the way, the potatoes are sourced from a local project that is supporting and employs the disabled.

Get traditional German potato dumplings here in this traditional and quaint restaurant. I recommend sitting outside in the backyard of Köstritzer and enjoying sunny weather under shady trees. If you still have space in your tummy, dig into the delicious Gugelhupf dessert.

[su_note note_color=”#fcdade” text_color=”#ef7583″ radius=”0″]WHAT TO EAT: Klöße
German dumplings are unlike those of other countries like China or Japan. They are made from 2/3 raw potatoes and 1/3 mashed potatoes (or half half) and are super filling and utterly delicious.

Depending on which region you are eating them in, they vary in shape, size, colour and consistency. The further south you go, the lose they get and might even seem to disintegrate.

To the East, the sulphur used to keep them looking white or yellow is spared, resulting in a green-grey look. This doesn’t affect the taste, don’t snub!

We even have a dumpling museum in Thuringia! Also important to note: Usually, German dumplings are eaten during colder months, sometimes even at Christmas markets in the region.[/su_note] 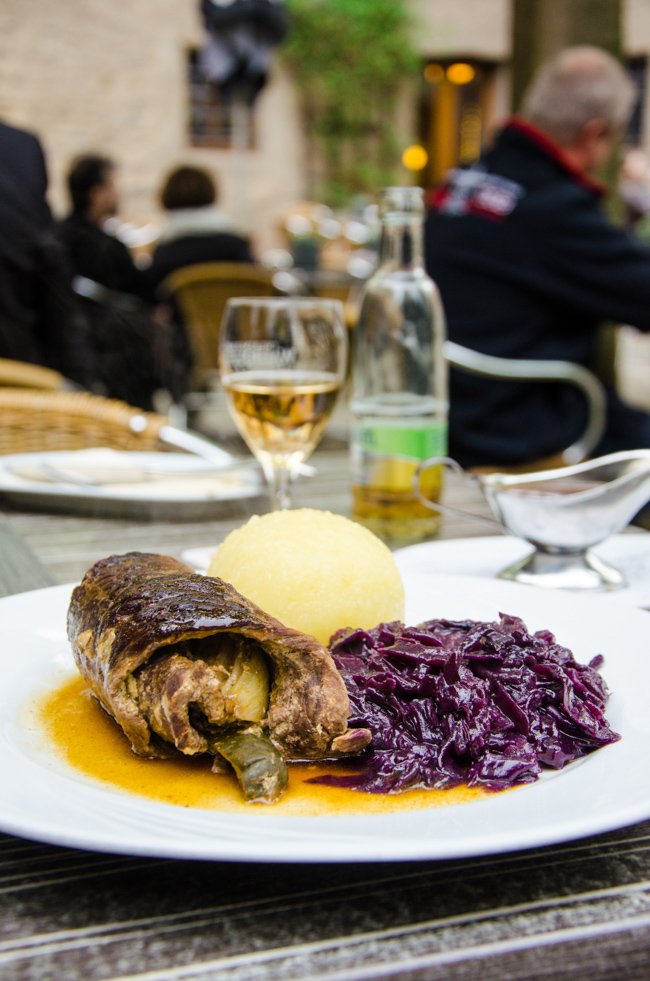 If you want a real authentic vintage restaurant in Erfurt with a dose of jazz, walk over to the Speicher. Translated, this means “storage” and you can still see the original building layout for this. Solid wooden beams, solid brick and mortar. In the back, you can sit outside in the biergarten. Note that this is a smoker’s establishment.

Right opposite the Speicher, you can get fast food Thuringian style. Grab a freshly grilled Thuringian sausage or get a veggie grilled cheese. The quality at Faust Food is high and it is a popular place with the locals. You can choose to sit inside at the long tables or have your sausage on the go. The eatery’s name is of course a pun on fast food and the famous play Faust, written by Goethe, who visited Erfurt very often. Thuringia was his big playground, essentially.

[su_note note_color=”#fcdade” text_color=”#ef7583″ radius=”0″]WHAT TO EAT: Thüringer Bratwurst
Ok, listen. A true Thuringian eats their Röster or Rostbratwust at a BBQ and in a bread bun, not in a restaurant. And with mustard, particularly from the local brand Born. Ketchup is for kids. (Which is why it is perfect for me. Don’t judge.) If you must go inside a restaurant, you can pair it with sauerkraut and mashed potatoes. [/su_note] 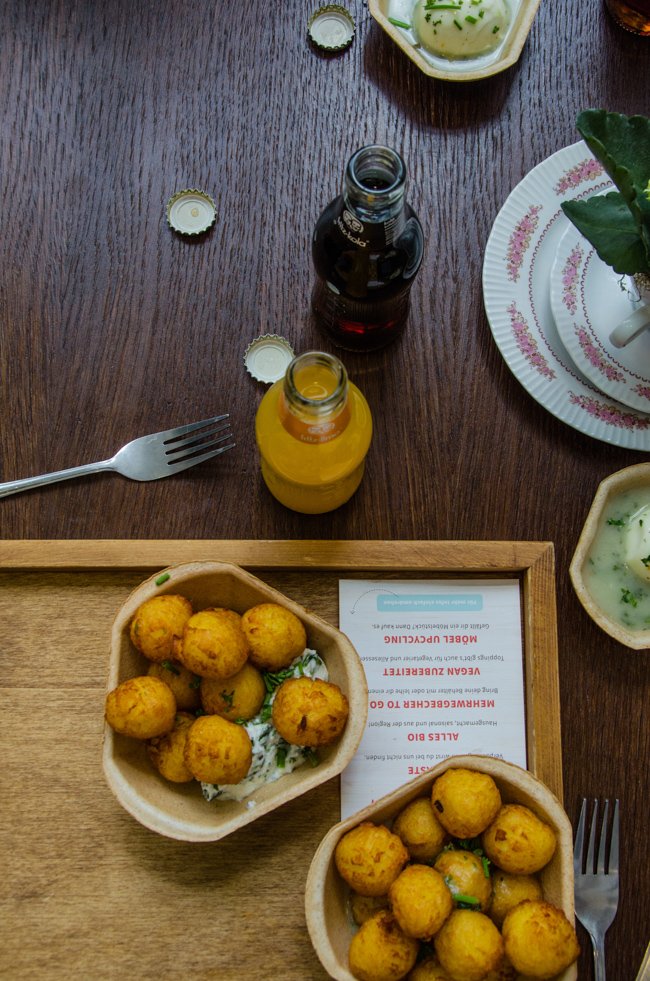 This little eatery with a view of one of the main shopping streets on the way to the market packs a punch! Not only is it owner run and food made fresh every day. The quintessential Thuringia dumplings have been reinvented and their taste taken up to a whole other level. While the Restlos soup seems to sell out super quickly, try the amazing fried mini dumplings in various sauces. I picked parsley with boiled egg and it was instant love.

A big bonus: the place is big on sustainability, which is why you can buy a recyclable cup for refills (even in other stores or just to hand it back later) and eat your meal bowl. This is reflected in the restaurant’s name: restlos in German basically means “every last bit”.

[su_note note_color=”#fcdade” text_color=”#ef7583″ radius=”0″]FUN FACT:
There is a special badge called “Kloßsiegel” awarded to restaurants that swear by the traditional dumpling making process from start to finish and you can have a look online and then hit them up. The restaurant list was created to protect the Thuringian dumpling and its recipe. You can find restaurants in Erfurt on the list, of course.[/su_note] 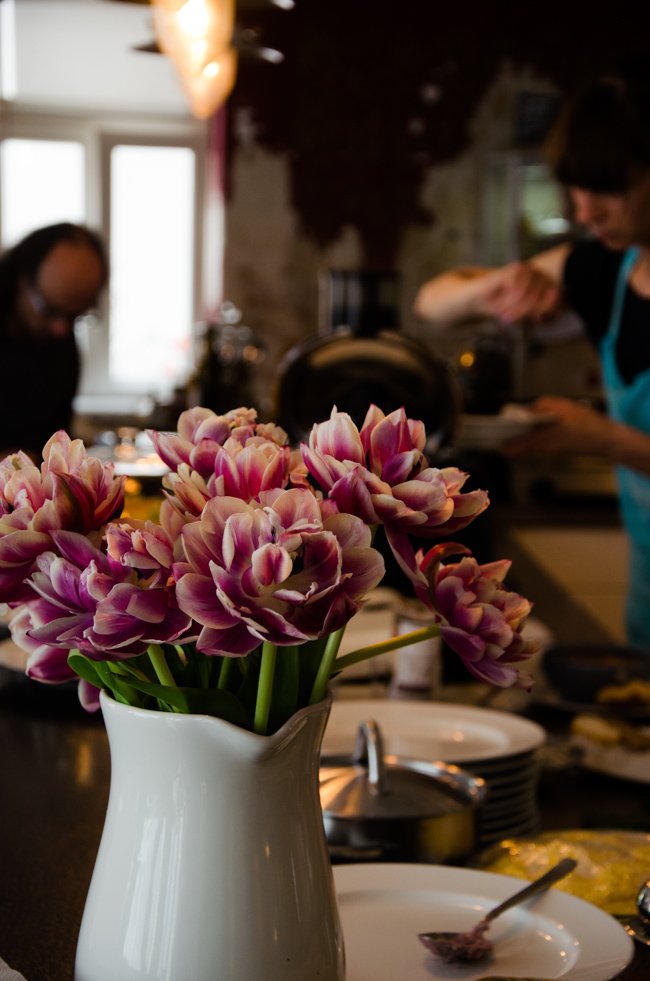 If you are in town to party and wanna hang with the student crowd Engelsburg, called in short and hip Eburg, is the place to hang. During the day, you can cure your hangover at the onsite restaurant “Steinhaus” and at night, you go down into the vaulted cellar below to live it up. There are regular live shows and special beer days (1,99€ for a glass) in the medieval courtyard. The site used to be a hospital with attached church in the Middle Ages and was turned into a party site by medicine students in the last century. There are even a few student housing rooms as well.

On the Erfurt Market, you can spot (and smell) a little food wagon serving the regular local cuisine, including “Kloß mit Soß”, dumpling with sauce. This is the perfect opportunity to have a quick try on the go if you want to save money and time during your sightseeing trip of Erfurt in Thuringia.Lunch menus are around 5€. Come early as it’s on a first come first served basis.

[su_highlight background=”#ef7583″ color=”#ffffff”]SAVING TIP: If you are on a tight budget, try butcher lunch specials. Sometimes they serve dumplings on Fridays as well.[/su_highlight] 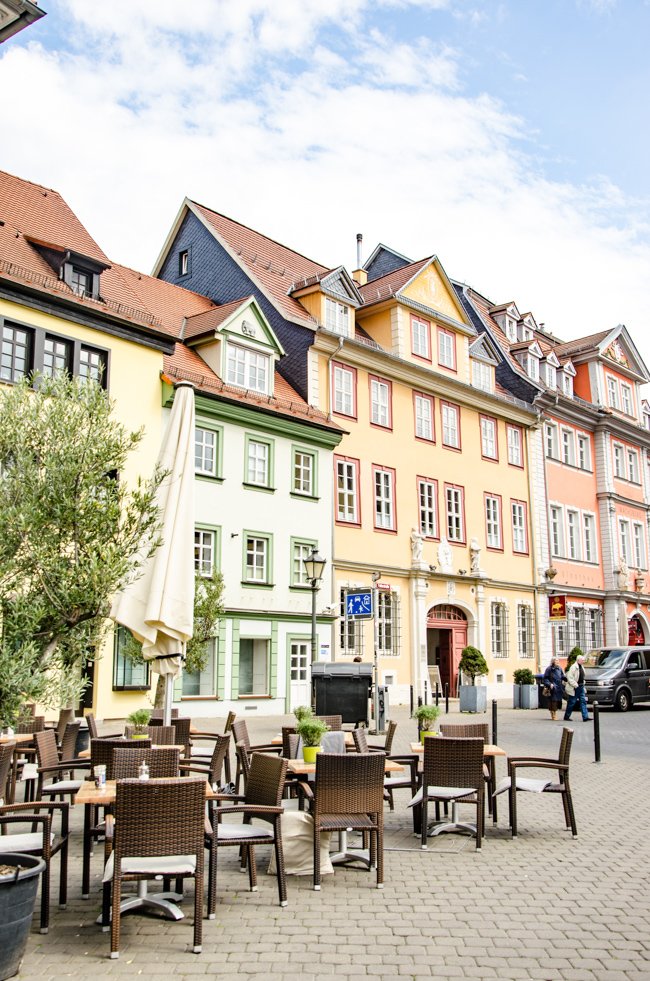 Germans do bread extremely well. And while there seems to be a bakery at every corner, including in Erfurt, you need to step into the cosy little Backstube near the Krämerbrücke. Once you see the white flag outside, you know the baked goods are fresh out of the oven. If it’s gone, you are too late. The handmade breads and buns sell out fast!

[su_note note_color=”#fcdade” text_color=”#ef7583″ radius=”0″]FUN FACT:
Germany has dozens of patents on different kinds of bread. Depending on the grain ingredients and way of baking, there is an incredible variety of bread out there. Try any bakery and also choose more local, privately owned bakeries for fresh sourdough or potato bread, for instance.[/su_note]

If you love chocolate and/or ice cream, you cannot possibly ignore Goldhelm. It’s easy to spot on the Krämerbrücke (Merchant Bridge) because of the constant queues. The chocolate is sourced from Vietnam and Peru and lovingly referred to as jungle chocolate. The ice cream is freshly made and comes in a variety of flavours. 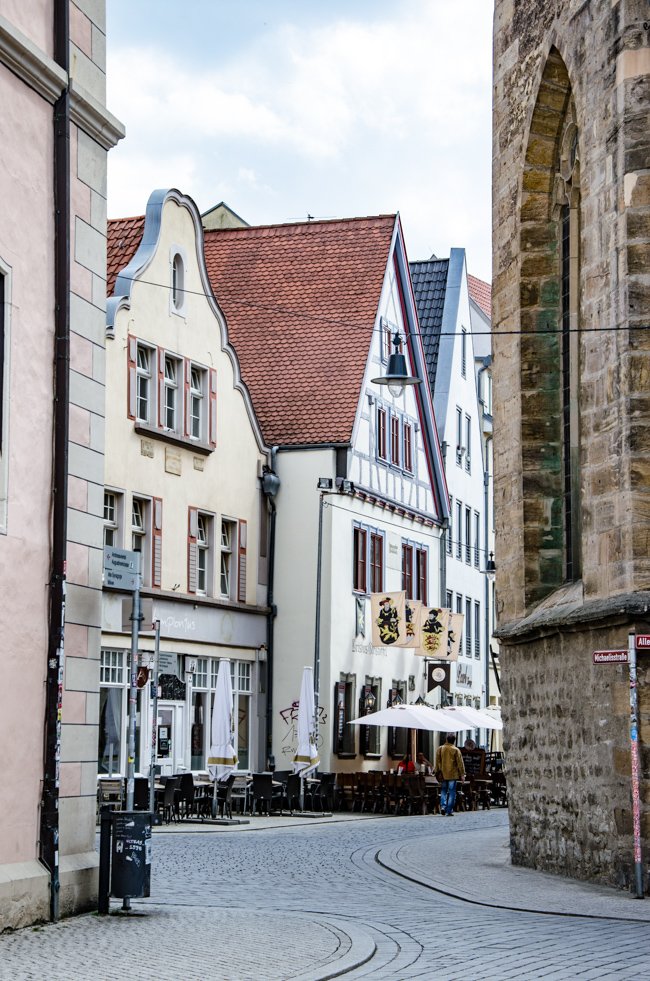 After all the eating, you might have been seriously infected with a love for Thuringian cuisine. Don’t fear because you can get an outstanding array of local products in the little Thüringer Spezialitäten Shop on the Krämerbrücke. This is a great place to stock up on souvenirs as well. Why not bring home a dumpling schnaps made from potatoes? If you are “Ostalgiker”, nostalgic for East Germany, then get Katzenzungen (chocolate cat tongues), Viba chocolate, Mühlhäuser Pflaumenmus (plum jam), Thüringer Bratwurst in a can or create your own gift crate while you’re at it. You will never wanna leave.

[su_note note_color=”#fcdade” text_color=”#ef7583″ radius=”0″]FUN FACT:
Thuringia has a dumpling as an unofficial mascot, the “Kuschelkloß” and “Karl der Kloß”. Erfurt, however, officially awarded its special type of bean the honour of representing the city. The name “Puffbohne” probably derives from the fact that opening the beans and then cooking them both result in a faint puffing noise. Also, well, there are generally farts involved when eating beans. We have an idiom for that. (“Jedes Böhnchen gibt ein Tönchen”)[/su_note]

Remember the “real” way to eat Thuringian sausages is with mustard? In fact, mustard is a Thuringian staple and you can find it used as a “spice” in many dishes, such as with beef roulards or as a spread on bread and cheese. Once you’ve walked across the Krämerbrücke, be sure to step in and sample as much mustard as you can. It sounds strange but it is oh so delicious. I loved the Born coconut or walnut flavoured mustards but my heart belongs to the mango mustard. 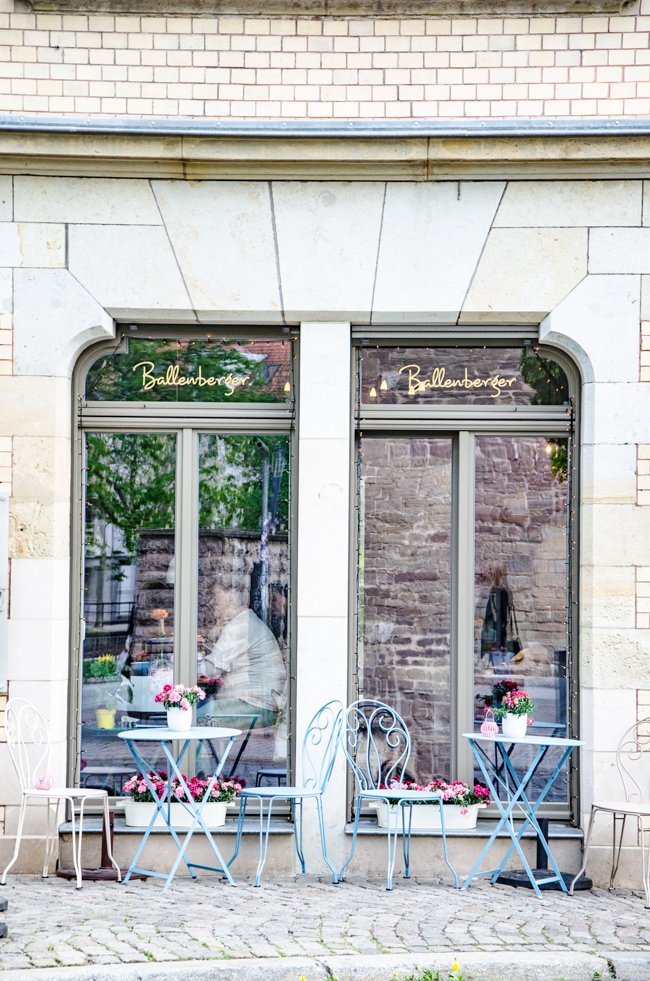 Is Erfurt a Foodie Paradise?

To me it definitely is. There is so much to savour, from international cuisine, including Spanish, Greek, Asian or Italian around Wenigemarkt, to hearty regional dishes, you can find plenty to satisfy your tastebuds. The main dishes, however, are traditional and super filling. If you are on a diet, forgot about that. Vegetarians have a few options but most dishes are meat based. I love Thuringian cuisine and Erfurt is really innovative in keeping and – at the same time – updating it for the current century. Try any restaurant in Erfurt to double check. Your tastebuds will thank you.

Tell me: Would you like to try Thuringian cuisine in a restaurant in Erfurt and which dish would be first?

Nuremberg Old Town – Magical World between City Walls
Feasting on German Potato Dumplings at the Thüringer Kloßwelt Museum // Sponsored
What to Do in Thuringia in Winter | Sponsored
The 3 Top Places for Orchids and Hiking in Jena, Germany
Why the Nature Reserve Rhoen Needs to Be On Your Radar // Sponsored 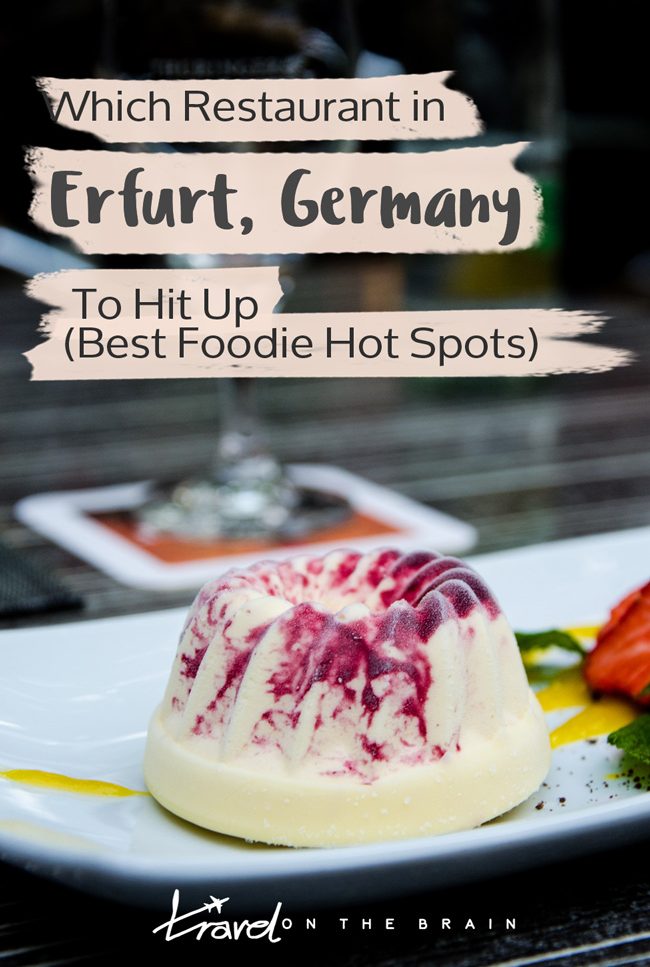