[Sponsored post] Did you know that a cheap hanbok rental can get you into the main Seoul sights for free? Not only will you feel like a king or queen, you can strut your stuff among the most beautiful Korean buildings. So here’s what you need to get your traditional Korean clothing rental for one day in Seoul.

**** The rental hanboks my friend and I got to wear were sponsored so I could write this post. Further, this post contains affiliate links. If you book anything from them, this doesn’t cost you anything but might give me a little commission to help keep this free blog full of more travel tips and me fuelled with chocolate to keep writing. As an Amazon Associate I earn from qualifying purchases. **** 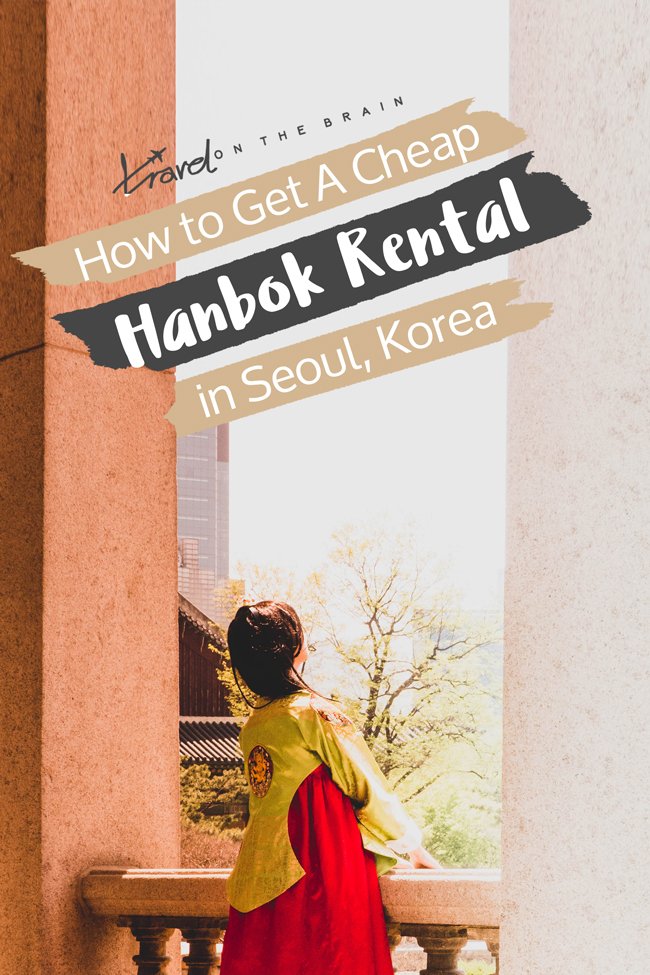 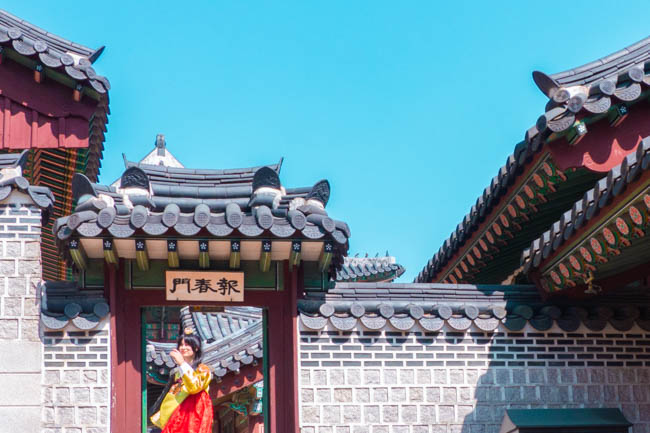 Where to Find OneDay Hanbok

My hanbok rental shop of choice was OneDay Hanbok. It is located on the 2nd floor at 4 Bukchonro5-gil, Jongno-gu. Walk about 300 metres from exit 2 of Anguk Station and cross the road from Jae-dong Elementary School to get to OneDay Hanbok.

The store is rather small but the selection will still be a huge trigger for those as indecisive as me. There are so many beautiful Korean hanbok dresses and colours to choose from! The owner is super nice and helpful with picking a good one as well as pairing it with fitting accessoires.

The History of the Korean Hanbok

Literally translated Hanbok (Hangul: 한복) means “Korean clothing”. The design was created and traditionally worn during the Joseon period until around 1900. Nowadays, you rarely see it on the streets as it is a (semi) formal Korean traditional costume, not a regular one. You can see people wearing the Korean traditional dress on Hanbok Day, for instance.

During the Joseon period, there was a binary, hierarchical clothing style. Aristocrats had their own fashion while peasants wore hanbok. So basically, hanboks weren’t particularly classy. 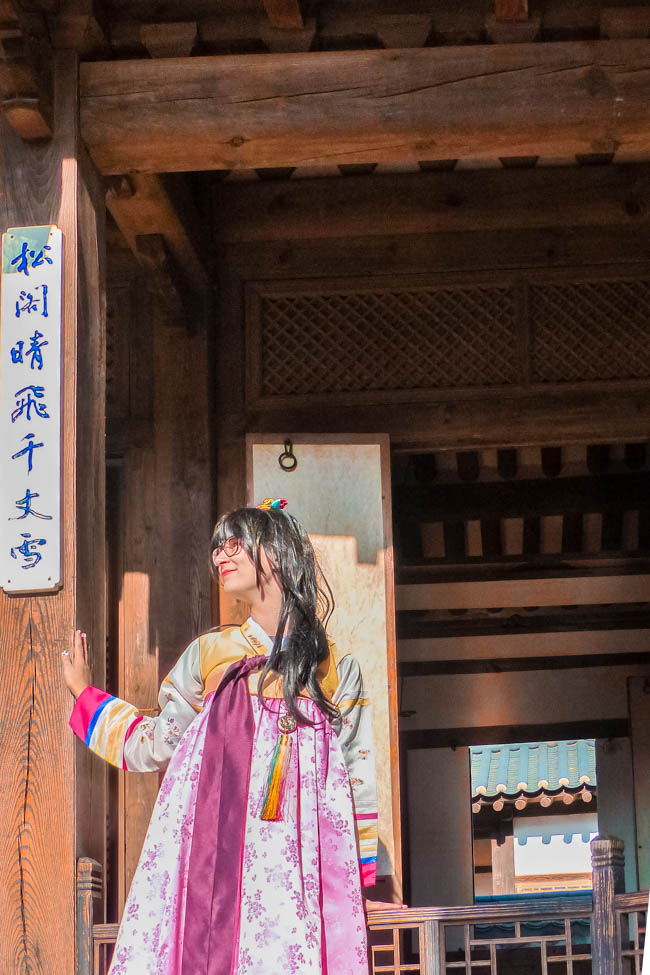 How to Put on a Hanbok

While the helpful staff at OneDay Hanbok will surely help you out, here is the gist of things. The Korean traditional dress is made up of two parts. The base is the big skirt, called chima. Men wear a loose-fitting trousers, refered to as baji. Over this, the jeogori, a blouse shirt or a jacket, is worn. You can compliment the ensemble with a headband and matching purse. 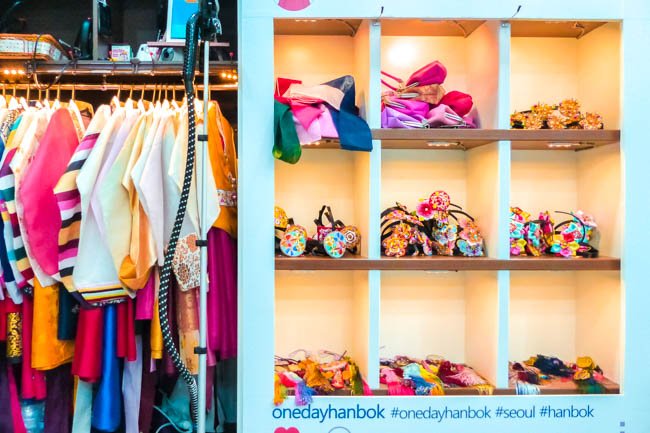 What Hanbok Dress to Pick

Even though Korean hanboks were traditionally peasant fashion, nowadays they can be classified into three categories depending on their purpose: everyday dress, ceremonial dress, and special dress.

From the colour of the dress, you can determine a person’s age, social position and marital status. Kids tend to wear bright colours, while adults stick to muted colours. Traditionally, unmarried women used to wear yellow jeogori and red chima. Once married, this changed to green and red or blue once they gave birth to sons. However,common folk wore pastel shades in their Korean traditional dress.

Of course, hair styles were also very much reflecting on a person’s marital status. Hair was braided for the single ones and knotted into a bun with married women and men. 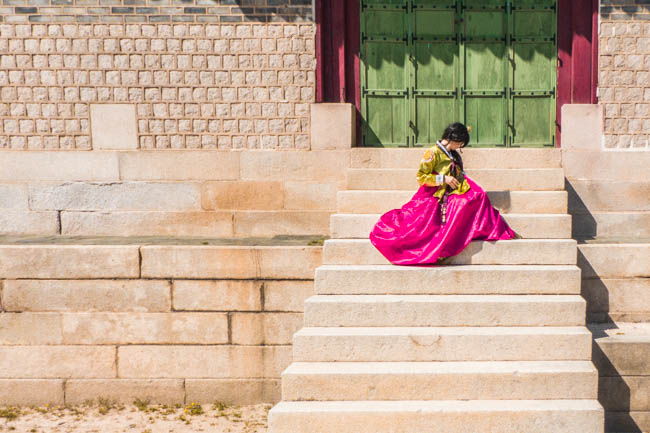 I didn’t know about any of this and so I decided on a simple red and white number. However, the owner of OneDay Hanbok quickly suggested I should be more daring. And daring I was with a gold-threaded bright green and red robe that I basically carried by the seams. It made me feel like a princess. Only later would someone tell me that the kind of traditional clothing I opted for actualy resembled royal traditional Korean fashion. 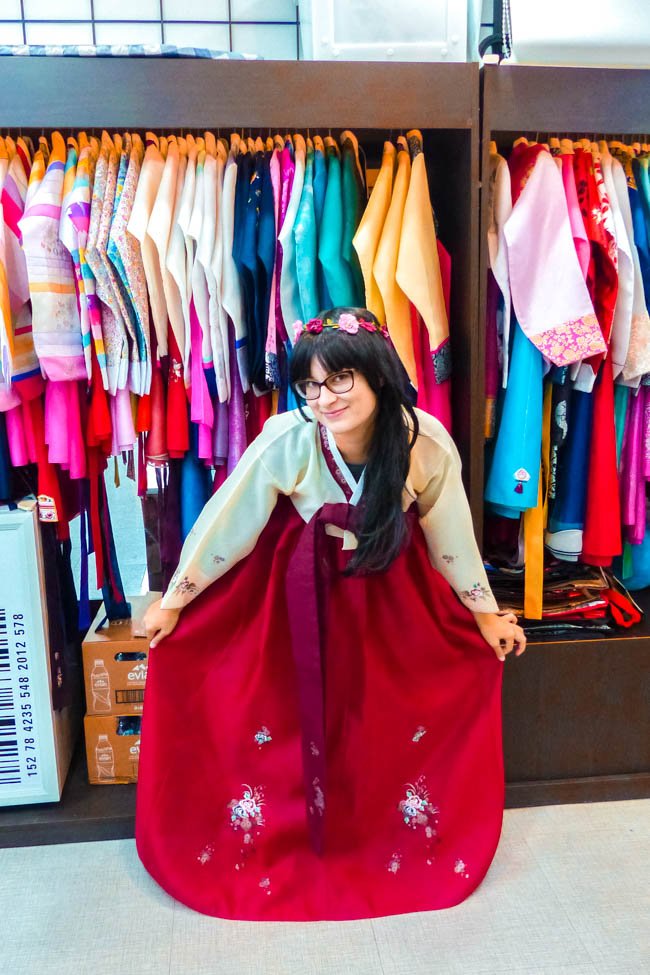 I had no idea the effect my Korean fashion style would have when I was walking Seoul’s streets and people started clapping.

I am not kidding, people actually stopped doing what they were doing, stared at my Korean hanbok and started whistling, clapping and telling me how pretty I was – both in Korean and English. At first, I thought people were just nice to the obvious tourist but then it got weirder.

After I taken advantage of the fact that entrance to temples and palaces, the grand Gyeongbokgung Palace, is free with a hanbok, I stopped the crowds. Korean school kids would run up to me to ask me for a photo. Again, I am not kidding. I felt rather odd and admit I was glancing more often than not over my shoulder, trying to spot a hidden camera. All of it felt surreal. 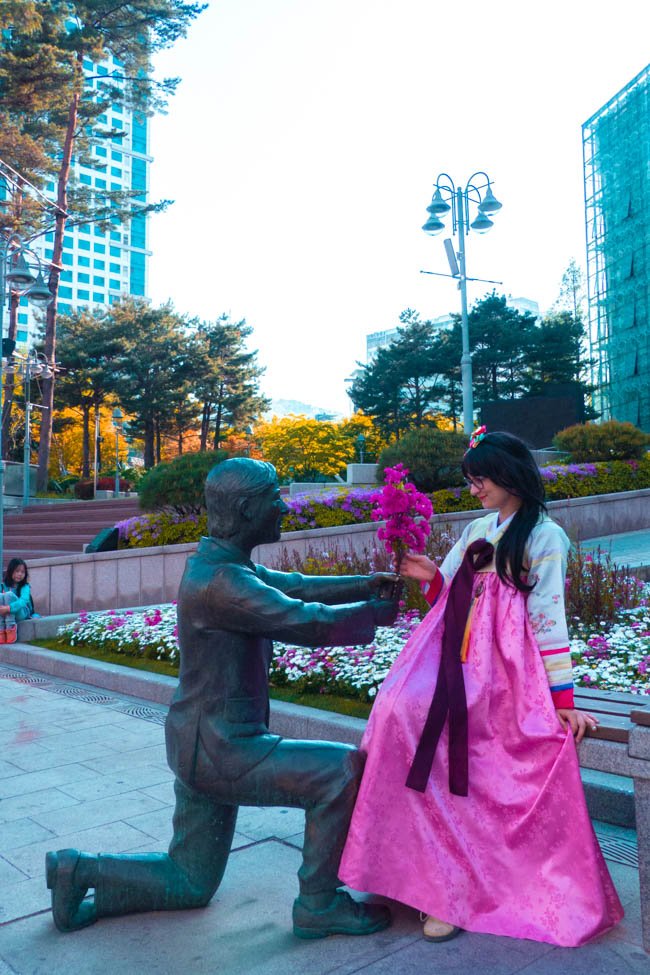 Renting a Korean Hanbok with Friends

If you are truly in love being the centre of attention, I highly recommend bringing a friend with you to try a Korean hanbok on as well. It was early afternoon and I was already so over being clapped at because of my Koran traditional clothing, and so switched into a less flashy choice. My friend and I opted for pink hues.

Of course, by now you are much smarter than I was and are probably not surprised to hear that the clapping and complimenting did not lessen. In fact, it only got amplified. Although it felt a tad awkward to be the centre of attention, we had a blast. Everyone was so nice and it was fun to stride around one day in Seoul in such pretty Korean dresses. I absolutely adore Korean traditional clothing. I think they are utterly stylish and suit everyone. 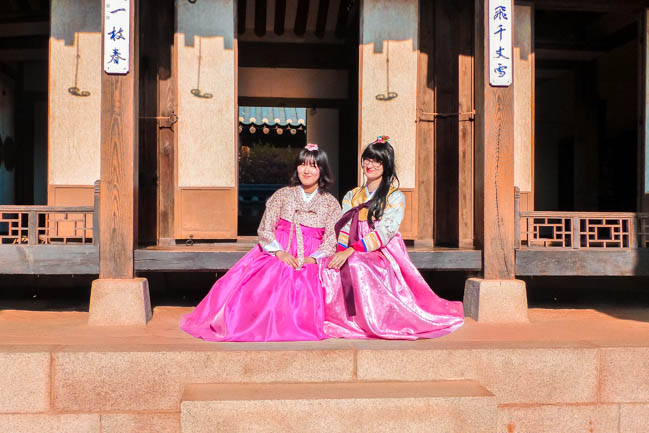 How Much is a Hanbok Rental?

To secure your cheap hanbok rental, you will have to provide a copy of your ID card or passport as well 50000 Korean Won per hanbok. In case you provide the original ID, the deposit goes down to 10000 Korean Won. For an entire group renting hanboks, one ID card is sufficient. 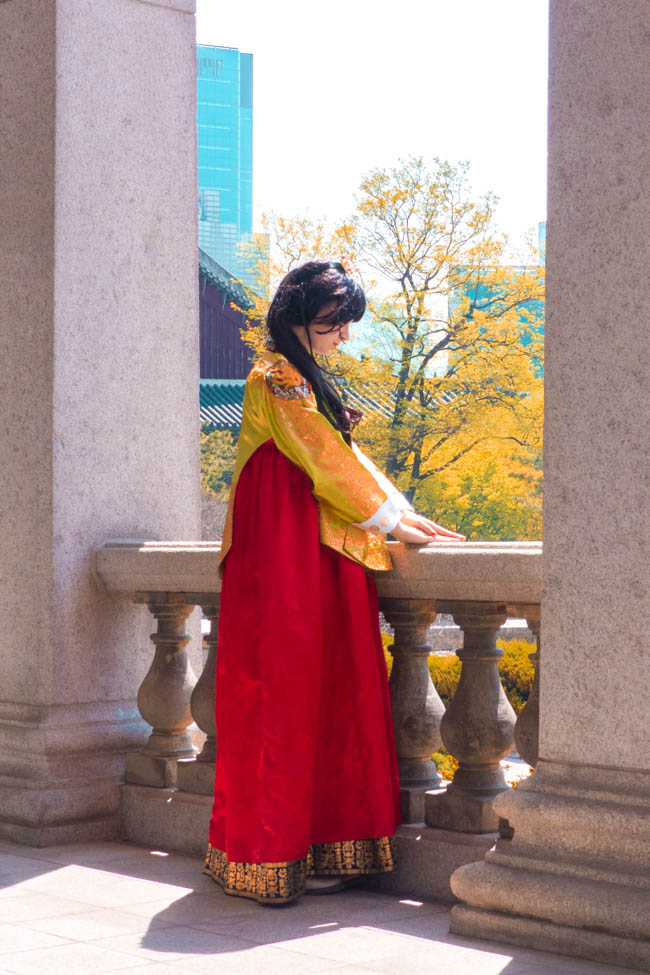 Is Renting a Hanbok in Korea Worth It?

I really recommend a one day hanbok rental at OneDay Hanbok. My friend and I thoroughly enjoyed ourself. On top of that, Koran hanboks are very flattering and so much fun. It definitely is a confidence booster. Give it a try; it might help to know that it is mcuh cheaper than Japanese kimono, I found. And I think I might prefer Korean traditional clothing over a Japanese kimono. But don’t make me decide (I am mighty bad at decision making).

Exploring Seol in One Day Resources

Whether it’s a layover or the start of your Korean travels and day trips, Seoul has a lot to offer. To truly get the best overview and insights into where to go, eat and shop, get your hands on a Lonely Planet guide.

In case you want to learn even more about hanbok, their history and traditions, why not get a book about Korean hanboks? Or a colouring book to pass the time on your flight.

Don’t ever travel without insurance in case an accident happens. This applies to any age or health/fitness level.

One thing I learned from my hanbok rental is that it gets somewhat uncomfortable after a few hours. The skirts can be pretty long and my friend and I had to hold it up while walking. If you want to spend less time walking between sights and also would like a refreshing ride on one of those hop on and off buses, get your ticket online in advance.

Tell me: Would you wanna get a cheap Hanbok rental in Seoul?

Korean hanbok and accessories were provided free of charge for this post by Oneday Hanbok.

Can’t handle spicy food? How to not starve in Seoul
What are the top 5 must see districts in Seoul?
Three day trips to take in and around Seoul 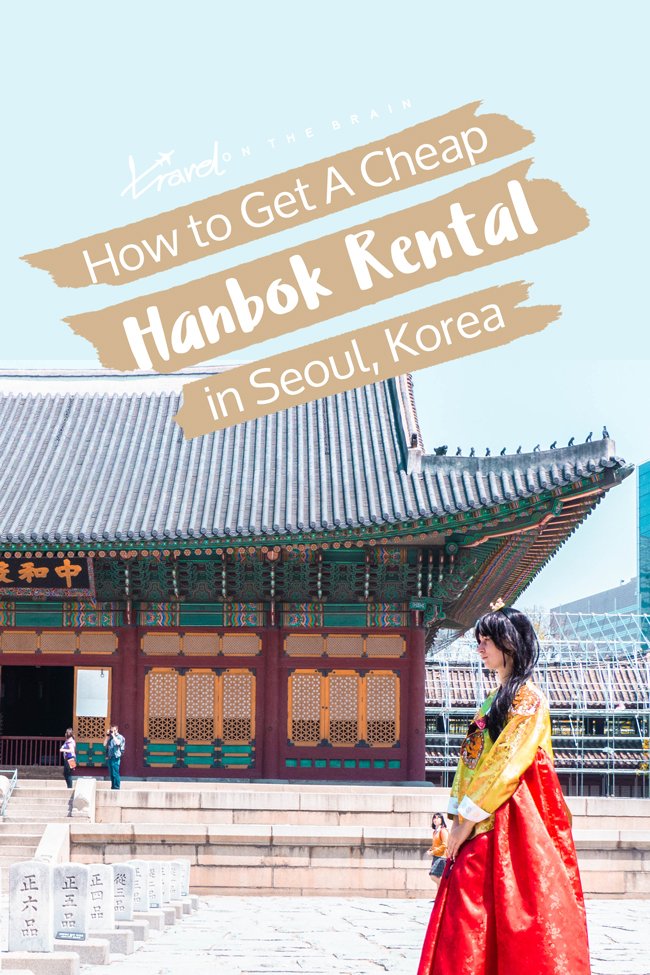 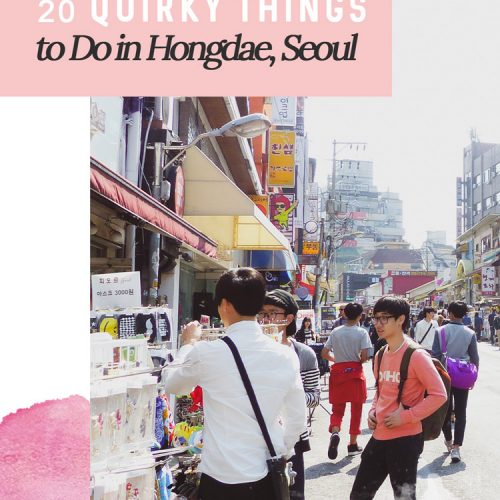 20 Quirky Things to Do in Hongdae, Seoul