I had missed my window for the Red Lotus Lake because I couldn’t bring myself to get out of bed at 7am. Timing is everything with these flowers and so I needed an alternative for an Udon Thani day trip.

My research led me to the mysterious Phu Prabat Historical Park. Intriguing stone formations, otherworldy landscapes and the middle of nature? Well, I was sold. And off I went. Some things I wish I had known in advance though…

The Myth of Phu Prabat and the Psychics

Once upon a time, there was a king who longed for a child. But it wasn’t meant to be. So when King Phaya Kong Phan heard of a baby girl born in a lotus flower near Phu Phrabat Kingdom, he raced over to “file for adoption”.

The old hermit, called Ruesii Chanta, who had been taking care of the baby, foresaw that the baby’s future husband would kill the king. The latter didn’t care and took the baby in anyway.

Once baby Usa grew into a beautiful teen and attracted a lot of male attention, the king panicked and sent her to live with the old hermit and some maids.

She resided in a small room in a tower (Hor Nang Usa), but was infatuated with the idea of finding a soulmate. So she made a flower wreath and sent it down the river. And what do you think happened?

A young prince of the name Tao Baros from another kingdom found the wreath and instantly figured, he found his potential mate. (Everyone is psychic in this story?)

True to form when it came to making rational judgments, he mounted his horse and continued riding through the night. His steed was having none of it and so he finally had to it behind at weird rock formations, which are now known at Baros’s Stable. Stubborn as the prince was, he marched onwards by himself.

Guess what he saw at the crack of dawn? Young Usa’s face. Tellingly, her name meant dawn. The hermit told on them and the king and his entourage came riding up, propelled by paranoia.

The king should have fired his advisers when they proposed to settle the marriage issue over building the best Buddhist temple over night. He, however, didn’t and immediately ordered to the building process.

Naturally he had a lot of men and chose the valley as prime building location, as it was rich in wood and building stones. It looked bleak for the prince. He wanted to keep his head AND the princess.

So he walked to the top of a cliff and shone his lantern, making the tired workers believe it was morning and they might as well stop working. He built a makeshift temple (Wat Louk Koei) under an overhang and called it a night. The king lost because his fancy temple wasn’t even complete and as a result lost his head. Literally.

The young couple got married and she had to take a lot of abuse from his jealous female fanclub. One of the fangirls found out about the lantern.

So the prince had to go into exile in the wilderness for a year to cleanse himself of bad spirits. Sadly, Nang Usa suffered from depression without her husband by her side.

She went back to live with the hermit but when her husband came rushing back, she died. He perished of grief soon after. Their graves are said to be next to each other and also part of the rock formations (Heebsob Tao Baros and Nang Usa).

Hold the tears though! The legend throws in a little happy ending as both were reborn as gods, Indra and his queen Indrani .

The Natural History of Phu Prabat

If you are more into science than myths, there are tales to be told as well. Around fifteen million years ago, the region was buried underneath the sea, which lead to underwater erosion. Later, it was frosted over.

Heavy ice sheets were pressing onto the rock surfaces and when the big melting began, the icebergs and moving glaciers rubbed on the ground. Glacial erosion was happening.

This resulted in seriously unusual rock formations and rock patterns. These include spires, massive boulders, menhirs and balanced rocks.

Around 6000 years ago, prehistoric hunter gatherers were following the herds up the mountains and decided to settle for a while in the Phu Prabat area.

Traces of their existence are foun in prehistoric wall paintings on the outer rock formations, such as Tham Wua and Tham Khon. If you squint your eyes and look really close, you can spot oxen and human figures.

Around 1200 to 1000 years ago, Buddhism left its marks on the area. During the Dvaravati era the rock formations were repurposed as shrines and Buddhist sems stones appeared.

Sandstone boundary markers were placed all around for religious rituals. The ground also was smoothened out and Buddhist symbols carved into stone. When the Khmer came, Hindu elements were carved everyhwere on top of it all.

Research is currently undergone to uncover more history. It is quite an interesting world you enter into, with winding and intertwining trees, a rock floor that looks like solidified magma and puzzling building-like creations.

The Religious Side of Phu Prabat

Should you be visiting Phu Prabat Historical Park in March, you can witness the annual festival in which the shrine Wat Phra Putthabaht Bua Bok becomes the main focus.

Still, it is a pilgrimage site throughout the entire year as it covers a sandstone Buddha footprint. It lies a little outside the Phu Prabat Historical Park.

The second most famous and maybe even more popular shrine is Hor Nang Usa, which looks like a prehistoric smurf house. Imagine a boot as a rock with a small shrine built into it.

A little further, you can find a square water reservoir, known as Bo Nang Usa. It goes 5 meters deep into the rock. Carving that out must have been an incredible feat thousands of years ago! Can you imagine?

Overall, there are several loops leading you around the main rock formations and attractions, which you can get from the local information and ticket booth.

I highly recommend grabbing one of those as you can easily find yourself back at the start without having seen the most important things. (Speaking from experience here.)

Take the eastern loop for the most sights in fourty minutes or put about 2 to 2.5 hours aside so explore the entire Phu Prabat Historical Park. If you want a grand view of the entire area (and another hotspot from the Phu Prabat myth), check out the Pha Sa Dej cliff.

Getting to Phu Prabat Historical Park

If you are lucky and have a car at your disposal, you simply drive up Highway 2 northwards and then turn left into 2021, towards Ban Non Ngam. Go all the way to Ban Phue and leave the town on motorway 2348 in the Northeast (where the hospital is located).

Continue on the same road once you reach village Ban Tiu and you will see a wooden entrance sign. After that, just follow the road upwards. You can turn left at the park guard’s booth to visit the temple or turn right to get to the National Historical Park.

In case you rely on public transport, you need to take two local buses. The first one, you can catch at the bus terminal 1 in Udon Thani. It is to the right of the numbered platforms. If you cannot find it, simply show someone Phu Prabat as a screenshot or written in Thai (ภูพระบาท). Buses leave hourly as far as I understood.

The bus driver will then drive for about 15 minutes and drop you off to catch another bus in about half an hour. Both rides cost me 100 baht. (Though I think the official price might have been 80 baht for each ride.)

An hour later, you will be dropped off at an intersection in the village of Ban Tiu. You either get a motorbike ride up to the Historical Park or walk for an hour. The return buses leave every two hours (e.g. 2pm, 4pm, 6pm).

A much cheaper version for me was to hitchhike to Ban Phue and get a regular green bus to Udon Thani for a mere 27 baht! It will drop you off at the bus station in the north of the city centre.

Where to Stay in Udon Thani?

The big question is: what is your budget and travel style? If you want to treat yourself and love overlooking the water and watch the sun rise/set in the arms of nature, check out the Tanita Lagoon Resort.

Conveniently, it also provides car rental, which makes getting to the Red Lotus Lake a lot easier. A more central stay is Prajaktra Design Hotel near Nongprajak Public Park.

In case you are on a budget and want a super central stay, nice staff and a rooftop terrace, check out Oldie and Sleepy Hostel. This is where I stayed and I enjoyed it. It has really atsy and hipster design and several chillout areas.

Is a Visit to Phu Prabat Historical Park Worth It?

It really depends on how much time you have during your trip to Udon Thani. Phu Prabat isn’t essentially a must see like the Red Lotus Lake.

If you are interested in (natural) history, nature, myths and archaeology, I am sure you will greatly appreciate it. I didn’t regret going there but if I had known how complicated it is by oneself and without a car or bike, I probably would have reconsidered.

Tell me, would you want to visit Phu Prabat Historical Park near Udon Thani?

Read more from the Thailand blog 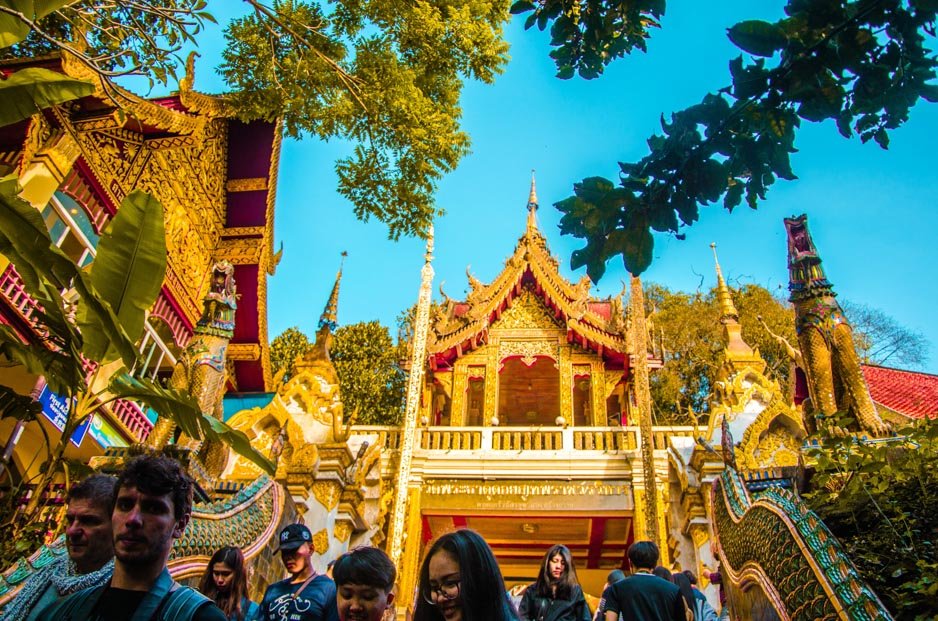 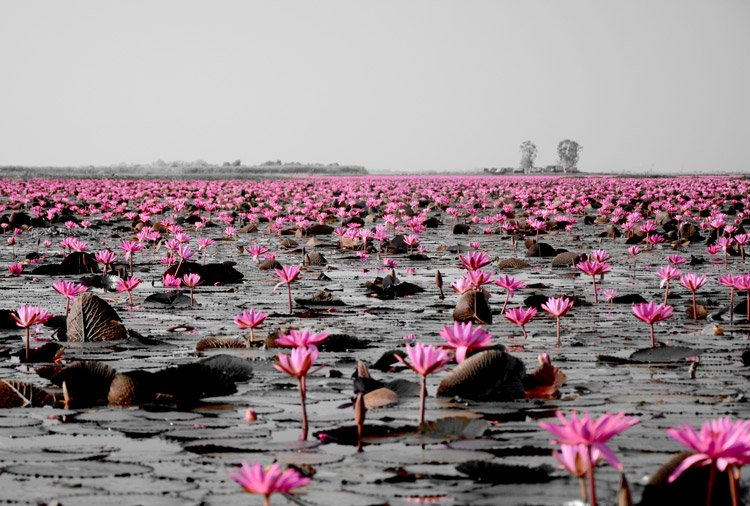 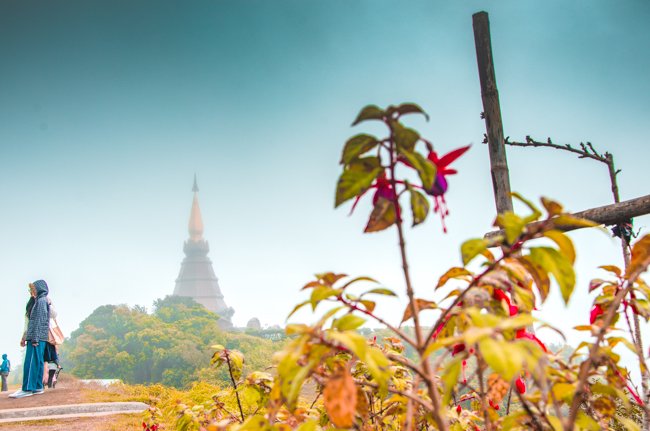 How to Get to Doi Inthanon National Park + What to See