Castles strewn all over Europe have always captured my interest and it was just a natural extension for me to immediately hunt down famous Japanese castles the first chance I got to. Australia and New Zealand didn’t have any to show for (no, I’m not counting you, Dunedin). Matsumoto was the first on my list and others soon followed. That said, as much as castles excite me, the Japanese style hasn’t really clicked toon much with me. 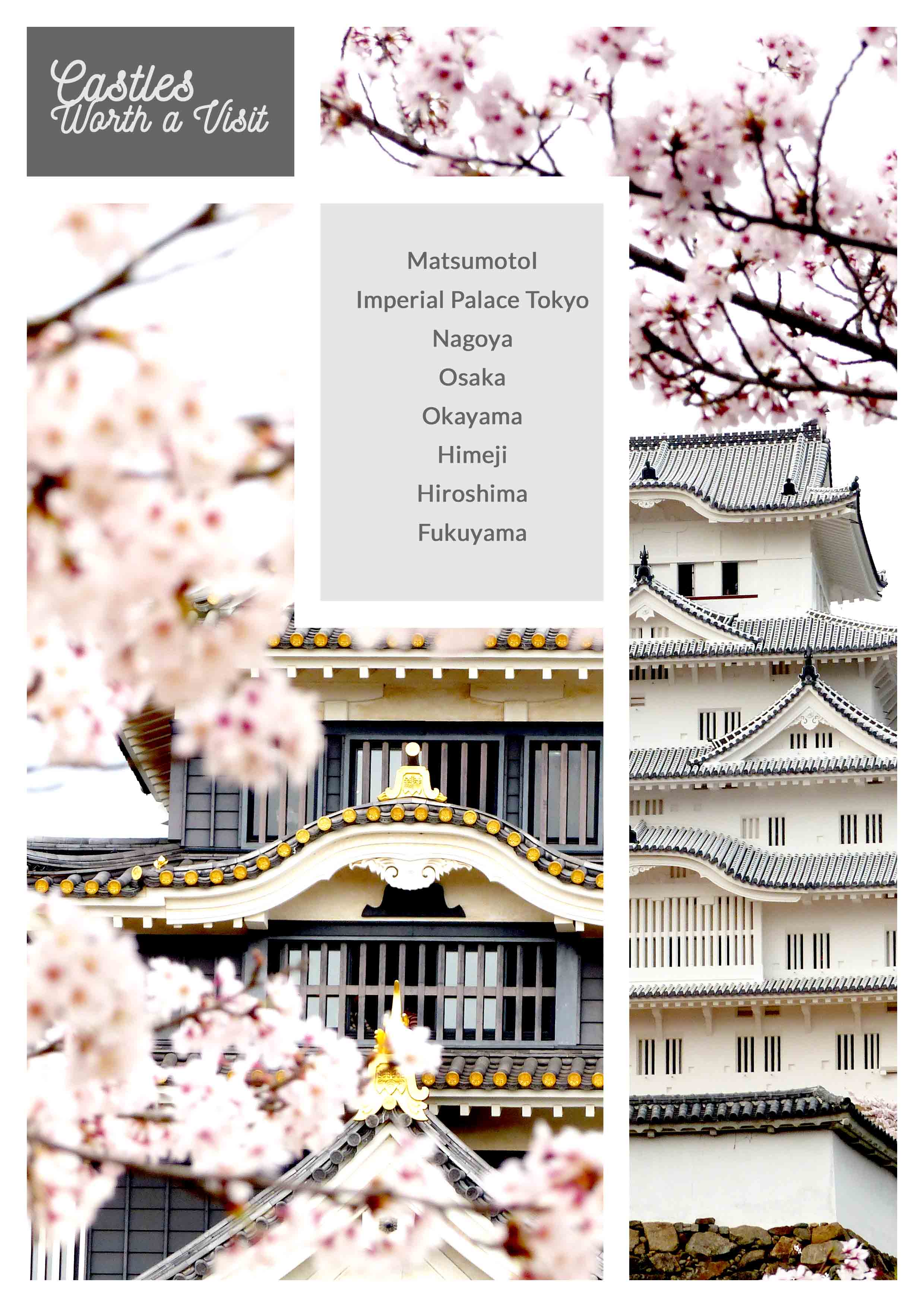 I admire the architecture and precision in gardening with Japanese Castles, but they all seemed so similar (as could be said of European castles from the same epoch, I guess). I can’t put my finger on it, but I prefer European ones – especially baroque. But no matter what your opinion is, I still recommend checking them out for yourself because they are special in their own right and it is usually free to walk around on the castle grounds unless you want to enter the museum inside the castle.

There are so many famous Japanese castles to visit and if you want to make that your mission, I highly recommend checking out the Japan Railpass, which you can get from Japan Experience sent straight to your physical mailbox. I actually saw two castles in one day because I though why ever not and had a blast chasing up and down the castle walls inbetween my fancy Shinkansen rides. But if you want to see more than just two castles in Japan (and you should), then these five Japanese Castles could find themselves on your to-visit list. 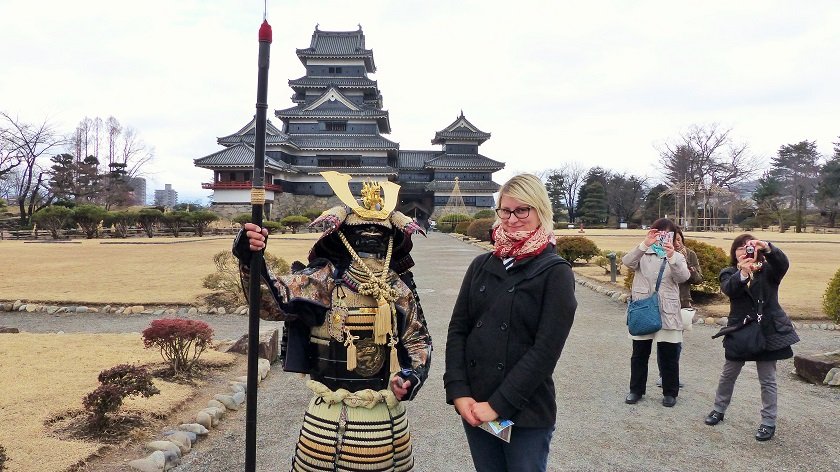 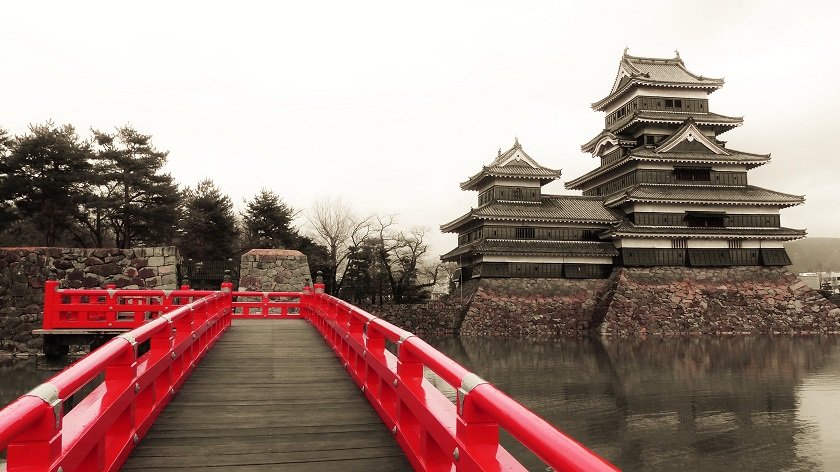 If someone talks about the Crow Castle they are probably referring to the black Matsumoto Castle. Just a two hours ride from Tokyo, it is definitely worth a visit. To be honest, at first I wasn’t too impressed. I liked it, walking in the gardens (that were kinda barren since spring was just about to come) and then strolling through the castle’s insides, getting an idea how samurai were stationed here. It was all a bit empty as well except for the exhibits and information boards.

Here’s a titbit of nerdy castle information: Matsumoto Castle is not the typical castle on a hill type since the whole area is absolutely flat. That’s why you find the moats, walls and gatehouses. All means of protection. Getting to the castle takes you through the town itself and across said moats. While you are following your path you will come upon a bubbling river lined by traditional sales booths and old temples. Make sure you try out the special taiyaki filled with sausage and Japanese mayo. I was unable to find it anywhere else and fell head over heels. 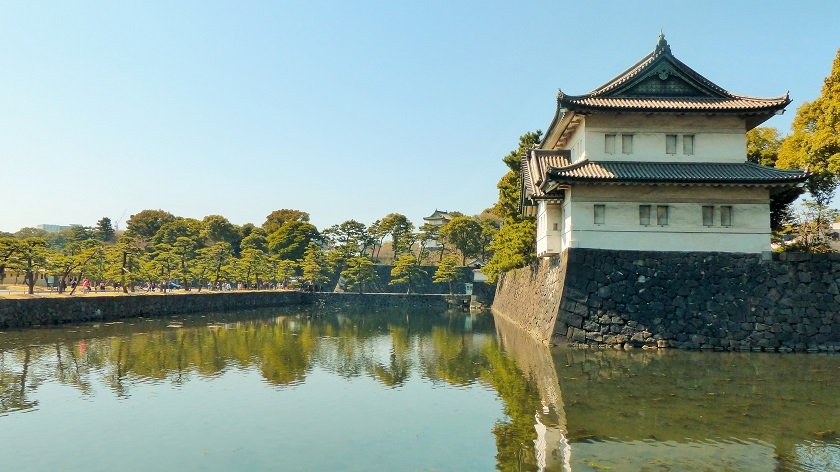 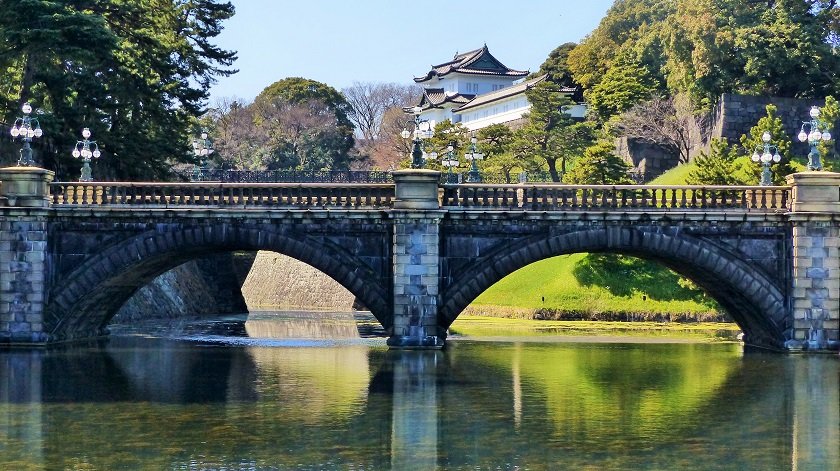 Beautifully blossoming cherry trees lured me into the walls of the Imperial Palace in Tokyo on my hunt for the best sakura spots. The Palace itself grew some inside, but the absolute best was at the most Northern entrance (click here to see other cherry blossom viewing places). However, if you miss this magical time, there are still wonderful gardens to behold. With or without the cherries in bloom. From young forests with thin trees sprouting as straight as pokers in Tenshikaku Donjonto the sky, a zen garden, round bridges and the iconic pine trees, your zest for nature will be appeased in the East Garden.

For those into learning about defence and the historical side to it, you can climb up the Tenshikaken Donjon and have a read of the information boards in this as well as other Japanese castles. But to give you a little bit of information already, did you know that the Imperial Palace actually used to be the seat of a wealthy Shogun family before the Meji Restoration saw the emperor leave Kyoto and move here instead in 1868? Prety cool, huh? 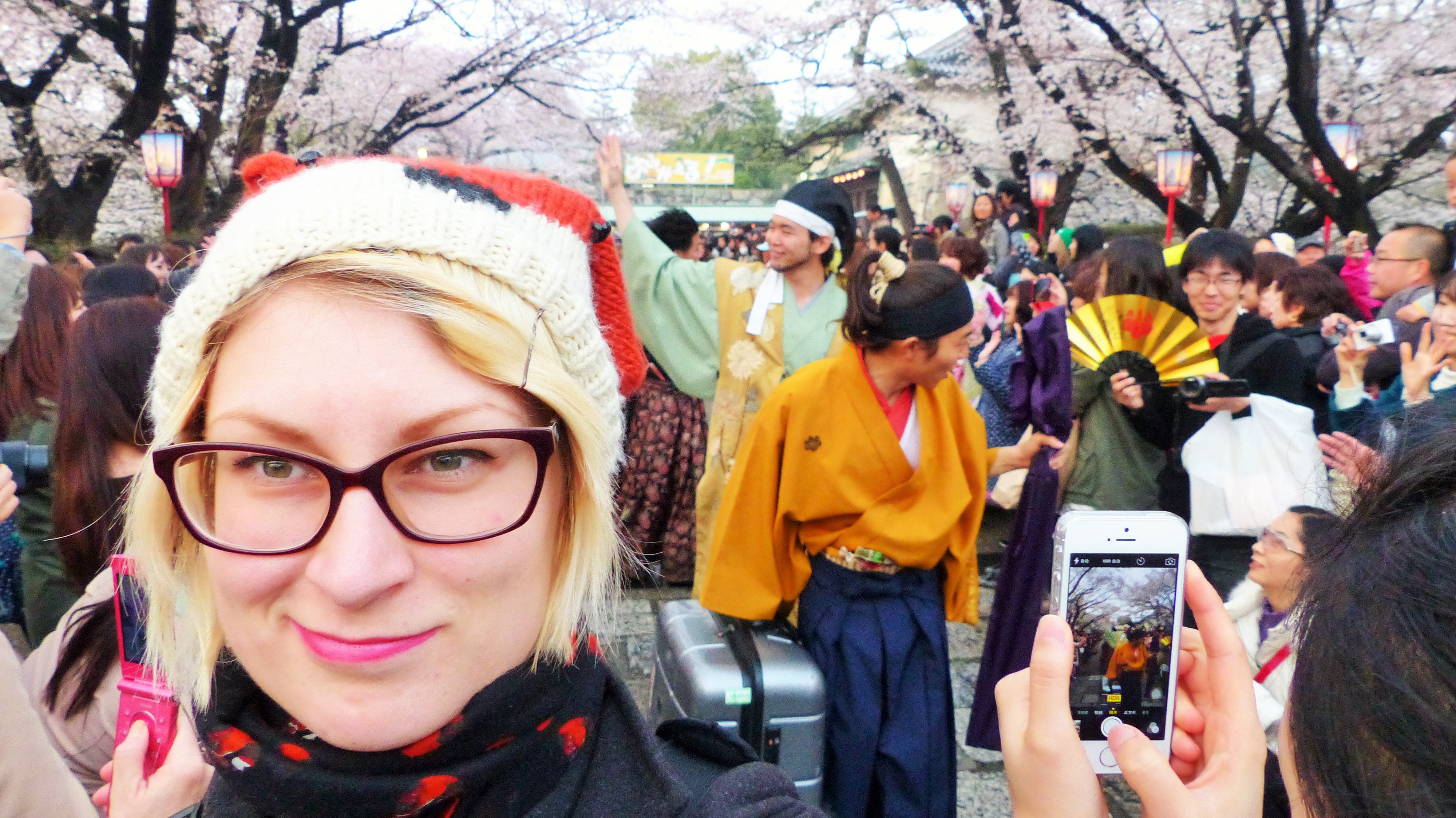 Unlike with the other castles, I had to pay entry to even get onto the grounds of the castle and not just the castle and its museum itself. The grounds, however were wide and I entered at the time of the spring festival, so there was lots of food, activities and visitors. The grounds were wonderful in all their pink cherry blossom splendour, there were actual food places (not just a souvenir shop selling castle shaped cookies and offering rinks from a vending machine). Plus, I saw some actors. Not sure if they were popular or not but people lined up to take their pictures and give them letters. How could I not take a silly selfie?

This is one of the prettiest Japanese castles I have seen and with your entrance ticket you can go inside the buildings and marvel at the literally golden wall paintings in the Hommaru Palace. If you want to see more gold, raise your head up to the two dolphin-like statues on the roof, known as gold Shachihoko. Sadly, the castle was mostly destroyed in World War II but the restoration work is wonderful. And one more thing I really liked was that one floor within the main building was made to look as if you were walking through ancient streets and looking into the stone and straw hats selling various goods along the canal. 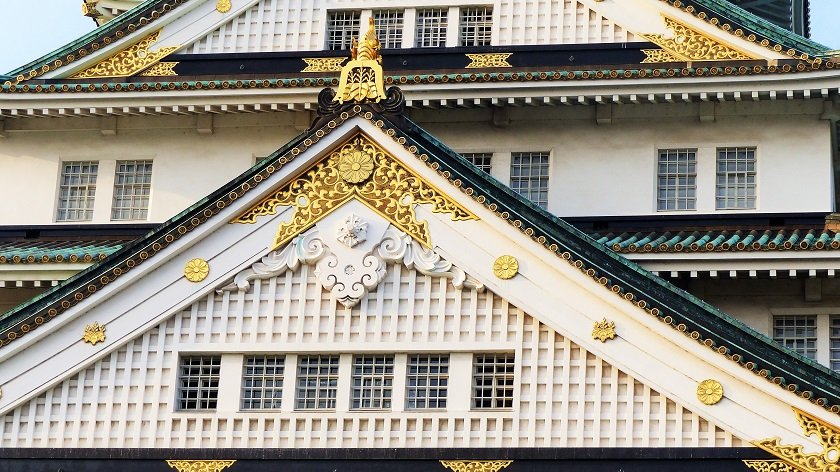 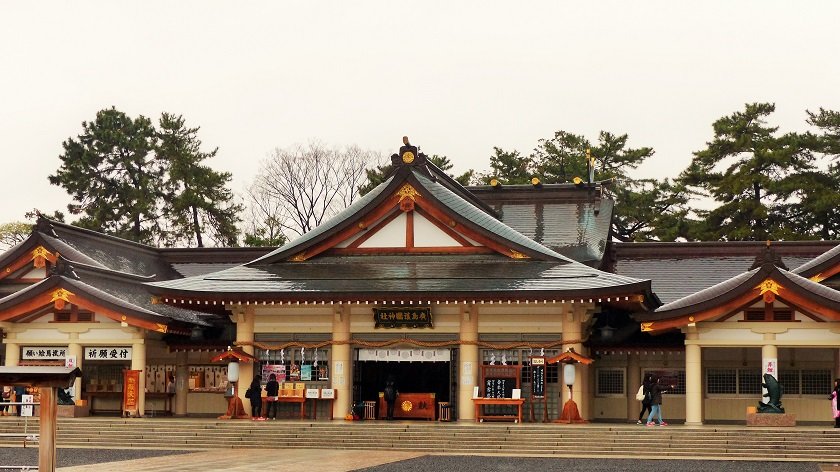 If you are in Osaka and want to see something apart from amazing shopping centres, food arcades and high-rise buildings, maybe something with a touch of the 16th century, I recommend one of Japan’s most iconic buildings, the Osaka castle. It is located in an enormous area and quasi an oasis in the city jungle all complete with gardens, religious sites and a museum (well, not in the beginning, of course).

And just because I am serving up nerdy knowledge as if there’s no tomorrow blog post, you ought to know that this very castle played a major role in the unification of the country. But essentially it was meant as an impressive piece of defence architecture with several levels of ground raised to put it on there, moats and a unique stone laying technique to make capturing the castle impossible. Well like the Titanic that assumption wouldn’t hold true. Fun fact: the castle has 5 stories outside but inside it’ actually eight. Clever. 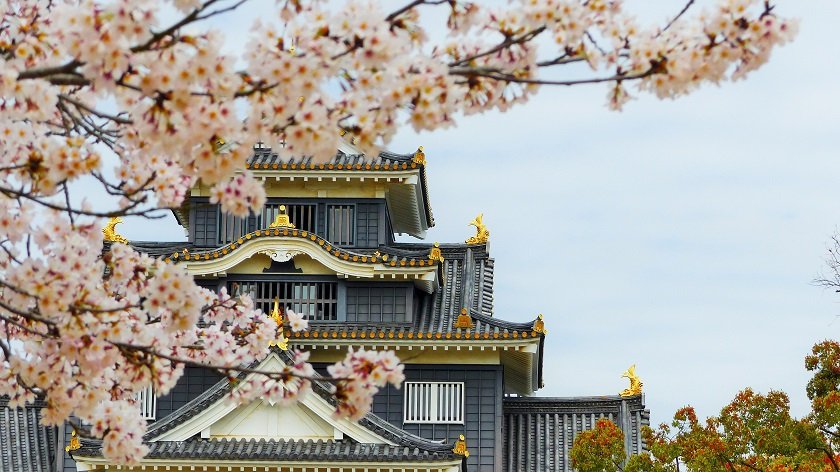 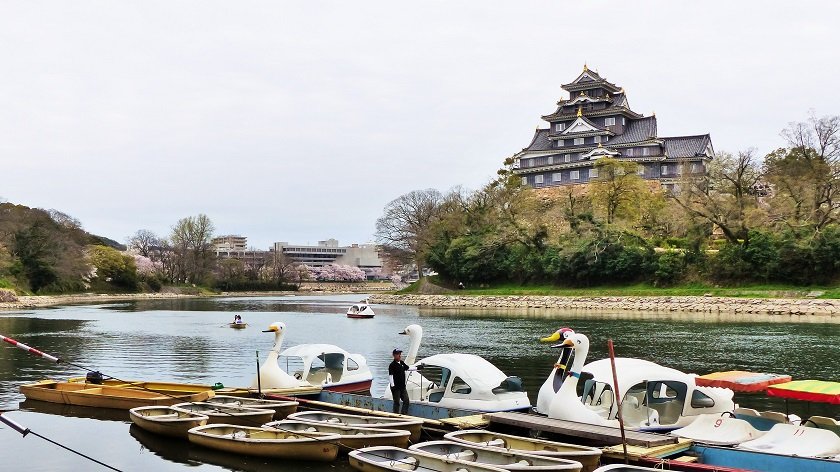 And here we have our second crow castle. Okayama Castle is also pitch black. One important difference in (original) appearance has to be made before you just brush it aside. Its roof tiles used to be gilded in gold! How extravagant is that? Nowadays, you can’t find a sign of this anymore. Like with Nagoya, this castle had suffered a lot during World War II, in particular the bombing of Hiroshima and what you see of the main tower is a replica. A very good one, though. Its watch towers remain originals

There are many different levels of moats and grounds to walk around and diggings sights and markings to spot on the ground. Peeking over the big walls, you can even see some current diggings going on. Apart from the magnificent cherry blossoms, there was not much gardening going on here. So this is where the comparison to Nagoya and Matsumoto ends. The best spot to see the castle in full glory is from across the swan boat jetty and the renowned Korakuen Garden or the Sakura Moriyama walk along the river, where yet again festivities were in full swing. 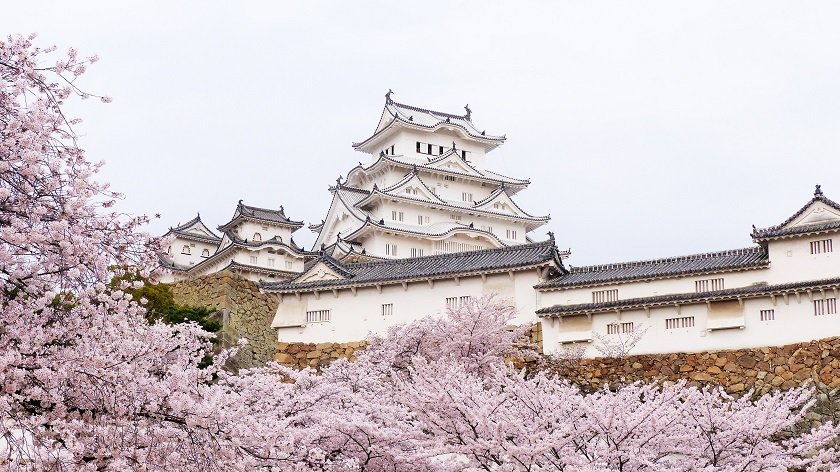 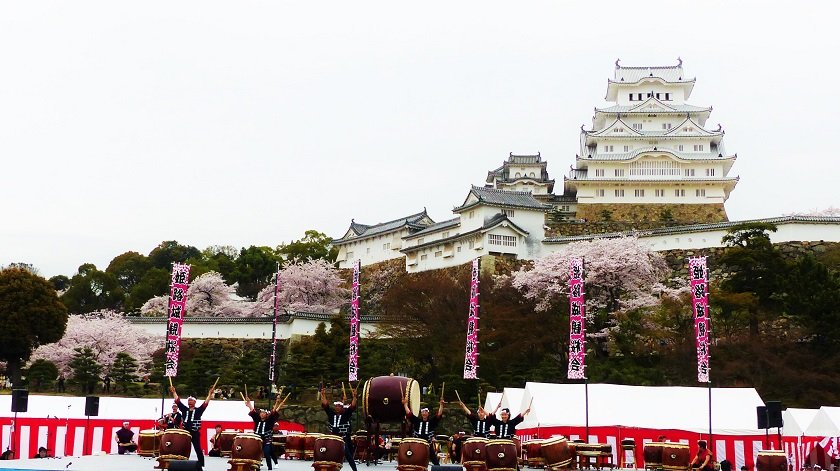 White as the clouds underneath which it stands tall, surrounded by pink cherry blossoms and rows of Japanese castle walls. I was super lucky to come here at the right time because only a few days earlier the renovations of the famous castle were completed I could see it in it full glory already upon leaving the train station after spontaneously having jumped on the train with my railpass. Finding my way to it was the easiest by far as compared to the other Japanese castles. Just follow it as if a vision on the horizon and the resounding gongs of the multitude of Japanese drums that came to perform for the festival were the perfect guide.

Foodie stalls selling special Himeji treats everywhere, such as oden and fried fish paste, greeted my senses and I thoroughly enjoyed discovering the castle grounds. Getting inside the castle walls or closer than the moat proved tricky as there was an entrance fee and the queue so long, the doors would have been shut in my face. Not being a big fan of that, I just strolled around and there was plenty to stroll through. Shrines, mini gardens, alleys and just splendid examples of Japanese gardening skills. Definitely my favourite castle. 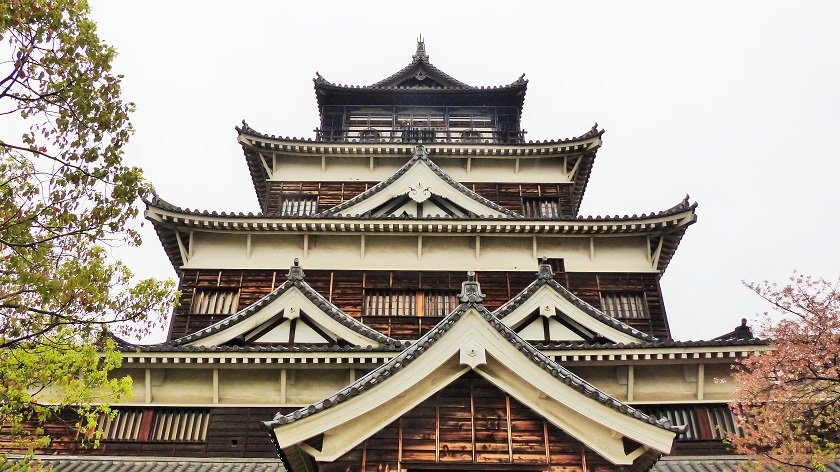 The last Japanese castle I visited on my railpass was located in the one city you were super curious about: Hiroshima. But the castle is not the highlight of the city, I must say. After seeing all these other amazing places, this one lacked in charm. But it could have been just the weather, which had the lingering rain front dropped onto my head. And so I strutted my stuff in the gardens with my fancy raincoat aka purple tent and danced about the cobblestones while gazing at the stones that marked the former layout of the castle.

You see, there is a reason this Japanese castle is a tad boring. And yes, we are talking bombing again. The irony of it all is that the castle was built for defence and when it was no longer used for that purpose it fell down under an attack. It is a sad part of history indeed and therefore needs to be visited just as much as the ruin of the Genbaku Dome and the Peace Memorial Park. The importance of visualising the gruesomeness that is war cannot be stressed enough. 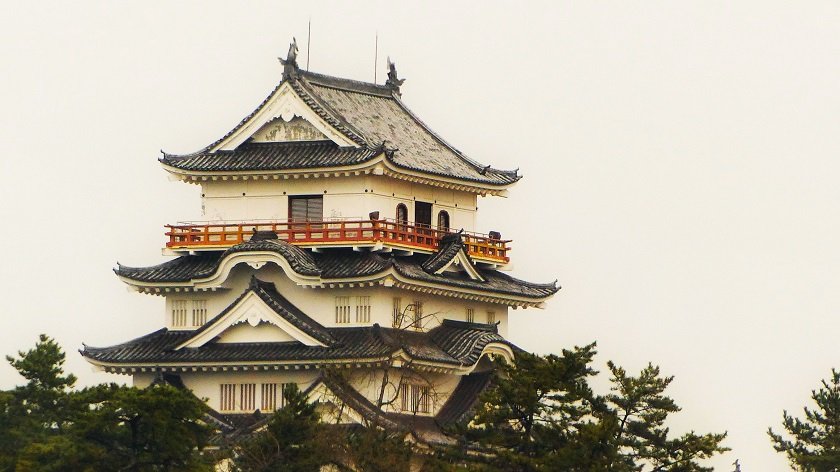 Ok, this Japanese castle I didn’t actually visit, but I saw it right there through my train window. It was exactly in front of the train station in Fukuyama! It was kinda fun to chase it with my camera while the train zipped in and out of the station and I was even more surprised to see a Gothic church in the middle of the city. It nearly felt like riding the train back in Germany. Just a little bit.

But anyway, the castle looked gorgeous even through two sets of windows and the garden quite big. Unlike Matsumoto, this castle was clearly not built on flatland even though the rest of the city is flatland. So if you want to see an 17th century Japanese castle on a hill, this one seems like a pretty good bet.

Have you ever been to any of these famous Japanese Castles yourself? Which would interest you most?

Disclaimer: This post on Japanese castles was made possible through the Railpass by Japan Experience. As always my opinion and adventures are my own.