I was ready. Or so I thought. I had made an unrepresentative survey among friends who had travelled a lot and had been staying in hostels before. Ok, my quota was one. To say that it had been an unpleasant stay would be a crass understatement. My bad hostel nightmares had only begun.

I needed to be better prepared for bad hostels. Prepared for snoring roommates, stained sheets, clogged showers and other evils I feared would come my way. And so my hostel life would start with a whole lot of paranoia and continue with a lot of encountering my fears. What doesn’t kill you makes you stronger right? 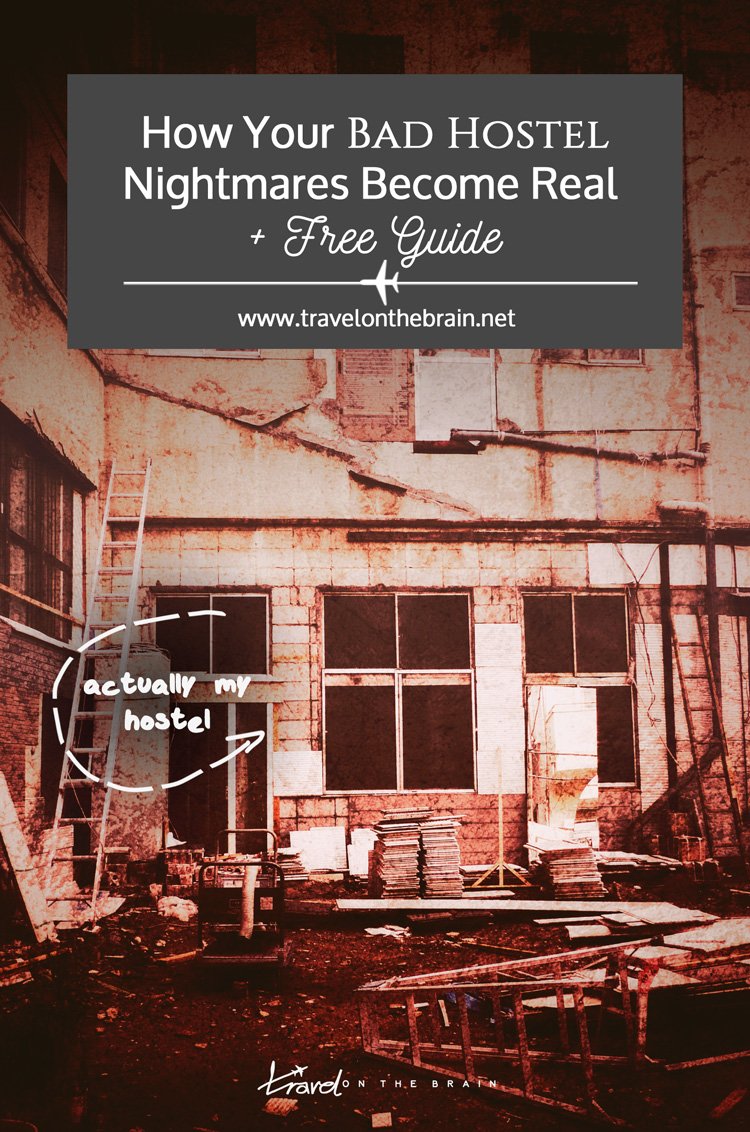 Yes, this is how one of my hostel nightmares actually looked like from outside.

Never Be Cheap in a Hostel

My first ever encounter with hostel nightmares took place in Barcelona. It was the first time I went on a proper holiday together with a friend (not yet another day trip, yay!) and as a team we put Scrooge McDuck to shame. I am pretty savvy when it comes to keeping your travel budget to a minimum but what ensued was even enough for me. Let’s just say we shared tiny tapas. Unfortunately, that was no joke.

The hostel was the first choice of my travel buddy after she overruled my carefully selected property that I had singled out after hours of internet search, cross comparison and perk analysis. It was the cheapest in town (in total 5€ cheaper than what I came up with) and it certainly deserved to be.
The toilets were squeezed into the shower rooms, not leaving any option to sit whatsoever (or lock the door) – that is if they were actually working and not blocked, oozing liquids onto the floor. The ‘internet room’ was the main entrance with two computers straight from my 90s childhood (and internet just as “fast”) and the receptionist’s English was working at random (depending on whether he cared to answer questions or not).

From Elevator to Hostel Nightmares

My sleepless nights began with an awkward elevator encounter and would not stop until I was back home in my own four walls and no more creepy men around in a bad hostel. It was all very movie-esque. Once me and my friend had entered the elevator, a guy jumped into it in the last second and upon seeing us, tried to vanish into the furthest corner and practice his invisibility skills. It didn’t work.

It didn’t work either when he was shown into our 4-bed shared dorm and in panic called upon the receptionist whom he told that he absolutely cannot be in the same room as women. He didn’t know I understood Spanish as well as panic and so I wasn’t very pleased to tell my friend we might be in the same room as a pervert who couldn’t control himself.

She wasn’t fazed at all, saying that “the worst that can happen with a man being in the same room with us was to sort through our panties.” Was it indeed? I tried telling that to my spray deodorant with whom I shared my pillow that night during my hostel nightmares, but it wasn’t very much convinced and stayed with me for protection.

Me and my deodorant had a little dance party after creepy guy checked out as fast as humanly possible. But the party didn’t last long and before the imaginary confetti had fallen, a new level of creep had set up camp in our bad hostel. And he wasn’t alone. He came with a giant toy train in a tightly sealed package.

Now if that wasn’t strange enough, he would never steal a glance at us, let alone acknowledge our presence but pull out his train from underneath the bed, look about him suspiciously, then gaze at it intensely for a minute and put it back as quietly and creepily as he could manage.

In total our 5 day-long getaway saw us with three creeps in total that were one stranger than the other but all had a shared trait – apart from the creepiness. They seemed to work towards an ear plug shattering snoring competition. And they were excellent at it.

So let me bet, now you are super keen on travelling to the next best cheap hostel around? Come on be honest. Hostels aren’t really that bad, you can have an amazing experience. You will meet fellow travellers who you can instantly connect with. There will usually be kitchens, fun facilities and even pools. Sometimes there is free breakfast, city tours and activities. Plus, there are some stellar hostels out there who beat hotel stays. You only have to look for them. Don’t ever go for the cheapest prices (duh!), because that jusually means bad hostel.

[su_quote]
Click to tweet: “Hostels can not only be perfect settings for Hollywood Horror movies, but they can be actually fun.” – @travel_brain

Why on earth would I ever do that, you might scream at the screen now. Glad you asked. Hostels can not only be the perfect settings for Hollywood Horror movies (forget the motel ones, hostel nightmares are so much better!) but they can be actually fun. And this is no joke or irony.

I did not only experience hostel nightmares. In fact, I have met the loveliest people in hostels, made friends from all over the world and thus gotten invited to places all over the world (to which I already have taken a couple of people up on the offer – and for instance thanked one such friend by dressing them up in a hanbok and have her treated like a princess in Seoul).
[su_service title=”Read also: Screw the Backpacker Lifestyle I’ll Go Flashpacking” icon=”icon: plane” size=”22″][/su_service]

So Should YOU Stay at Hostels?

Apart from great memories (and crazy stories to make you spill your coffee), you can save tons of money. In fact, I made a little guide giving you some examples of exactly how to, which you can download below to stay ‘hostel happy’.

PS: YOU can get access to the free Hostel Planner and Packing List by clicking on this image. You will get many more downloads as well. And if you want to book a good (!) hostel, check out my affiliate link of hostelworld.com, where you get to see reviews of people who have stayed before. I use it all the time myself now.

#TravelBrainster Trisha: The Warmth of South America
Solo Travel for Beginners – The Top Five Countries You Need to Know