Slowly approaching the shore with their fins poking out of the water, I could hear the treacherous two notes of Jaws in my head. But before the thought could progress any further they were next to my legs and the mouth was opening wide. It was a bunch of them. 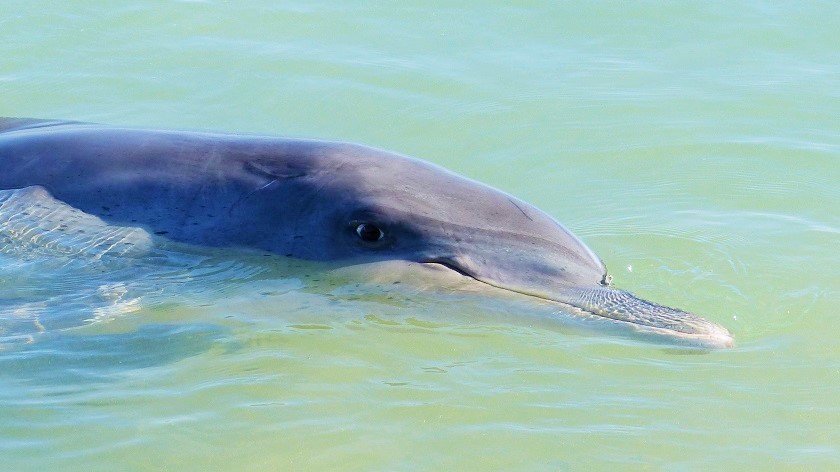 We made it to the shore to attend the daily feeding, the feeding of the wild Monkey Mia dolphins. Before and during the feeding, the ranger explained to us about these amazing creatures and how, since they are wild, we were to stand away and let them approach us if we got the chance to hold a fish in their direction. I wasn’t one of the chosen ones but got better pictures like that.

The gentle swimmers were extremely curious and followed the ranger back and forth, glued to her heels and being incredibly close. From time to time thei would cock their head to the side and examine us with one eye. Did you know that the other eye was still able to look into the other direction? 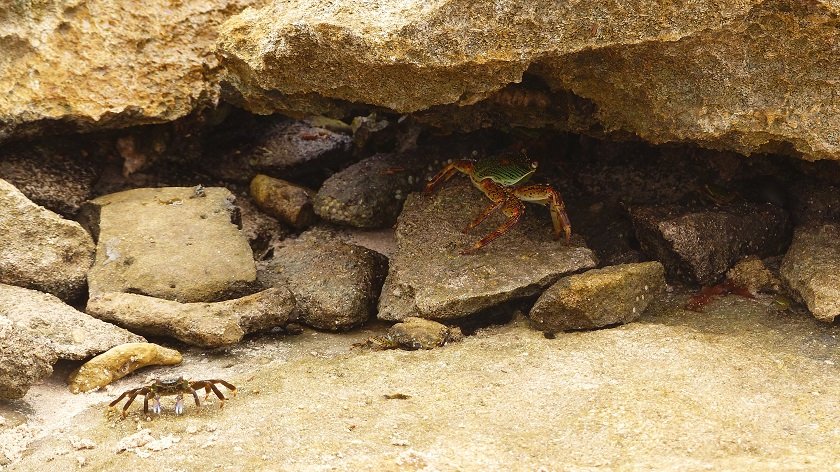 Enough of dolphins and onto the bitier ocean creatures, we stood at the Eagle bluff lookout over shark bay spotting sharks and rays swimming in the distance. Thankfully, the water was so shallow that we could easily see a couple of them floating about in the crystal clear. But that was not all.

The very next day we were given the option to go for a snorkelling trip on a glass boat or even get up close and personal with giant manta rays swimming below us. Just imagine colours of corals rising up beneath you and myriads of fish following your tail while the gentle giants are swimming carelessly on the low ocean floor. 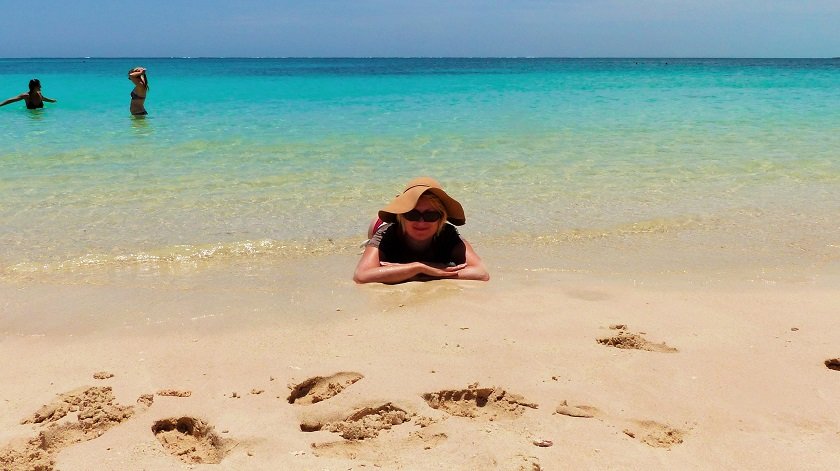 On top of that, Coral Bay, where we stayed, had a shark nursery up on the beach. Unfortunately, they were out for a swim that time. But never mind, the coastline was splendid in itself with the calm surface reflecting dramatic clouds and the red spawn of the corals (it is their reproductive season) tinting the blue waves a rusty red.

That, however, couldn’t even compare to what awaited us in Turquoise Bay. The bluest waters meeting white beaches and us happy bunch in the middle. Like the silly people we are we arranged ourselves in pyramids and human ladders, jumped around and did handstands. But the ultimate formation we did was at Vlamingh Head Lighthouse, where we wrote our final destination in human letters: Exmouth while the sun set upon us. 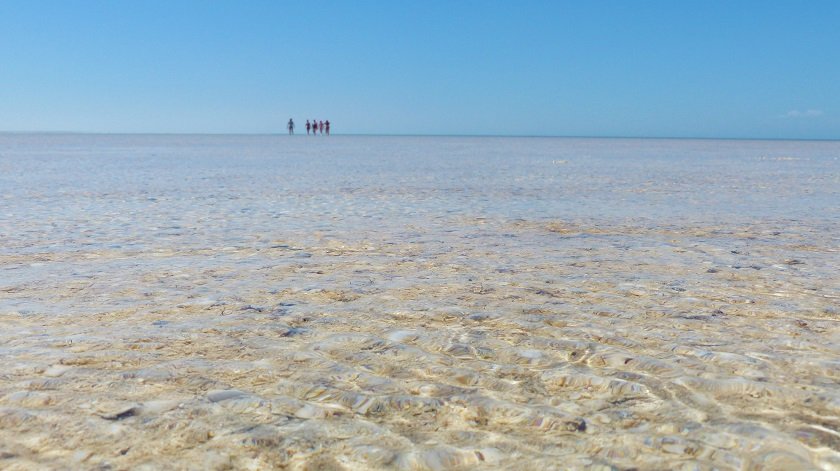 Having reached our final destination, we already had to wave it goodbye the next day or a nearly 12 hour long drive back to Monkey Mia. One amazing stop was still left. We had saved it because of the recent bush fires and got up especially early to make it after all Nature’s Window was a stacked stone formation that would have resembled a donut had it not been so edgy.

Through it, the national park and river bend formation looked all the more impressive and I would have loved to have some time to do the 4 hour round circuit. We were on a tight schedule, however, and after some more obligatory Atlas-inspired photos and sweeping panoramas, filed back into the bus.

For our pains of being crammed into a full bus in the hottest of seasons (even thought the tour guides certainly had it much harder, having to stay awake and drive all the time) we were treated to some seriously delicious spaghetti and custard trifle and even had some TV time! Ah, the little things in life.

Another foodie fest lay in store for us for our final meal together. With another group we produced a whole blown buffet, full with salads, grilled meat, wraps and dips, plus a surprise for our two lovely guides since they had made the tour so fun: a card and cake. 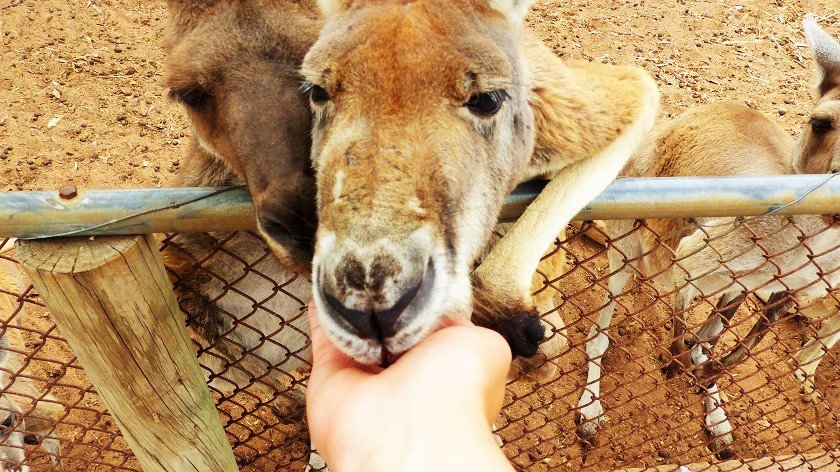 The last two activities we did on our last day were a great conclusion to our Perth to Exmouth round trip. First, we paid a visit to the Greenouth Wildlife and Bird Park, where its owners were raising and healing hurt wild animals to release them back into the wild. No government funding, just pure love and charity by visitors. So here’s my shout out: everyone, come here!

A bag of animal food in our hands, we collectively made our rounds between camel, donkey, sheep, emu, deer, goats and kangaroos, all eager and hungry for some snacks. Have you ever fed a kangaroo? They are so cheeky, they are pushing each other aside with their tiny little paws and might even grab hold of your hand for good measure.

But cuddling the dingo family was the best part to me. I had never approached dingoes, seeing that they are wild animals and not dogs as most people think (they are actually Asian wolves). This time around, they were licking my face and I could stroke them leisurely. Cuteness alert! Next on the cuddle schedule were a black and white baby joey in a makeshift pouch as well as a snake.

The final bang came in the form of a board. If you have followed my other South Australian adventures, you might have already guessed it: it was sand boarding time again!

I would like to thank Aussie Wanderer again for taking me along as a guest on their 7 day Perth to Exmouth round trip. As always, my opinion remains my own.

To book your own West Australia tour: