This post was sponsored and contains affiliate links. Atlanta in a day, is that even possible? As part of my ongoing series of seeing as much of American cities as possible but with a limited budget but money savvy traveller ways, I am bringing you Atlanta this time around, the city of Coke, Football and giant fish. Oh, and peaches. Don’t ask me why, peaches don’t even grow properly around here. Back to topic.

Armed with the CityPASS for its eight greatest attractions thanks to the city of Atlanta, it was a no-brainer where I would start off; I was basically ambushed. Behind me, immortalised in bronze stands Pemberton handing me his original coke. A few metres away is the ticket stand shaded by a giant coke bottle top. Even the rubbish bins were giant coke bottles with a slid. No more dilly dallying, let’s open that can of coke!

Make it Zush at the World of Coca Cola

Going into the World of Coca Cola seemed to me as if I was sucked into a whale painted in white and red with coke souvenirs and memorabilia from all over the world. Matryoshkas, glass moulds and even giant art deco lamps make a showing in this eclectic museum of Coke art and merchandise. Strewn in-between were films and presentations, one even in 4D with shaking seats, water drops and a story line aimed at kids. The entertainment factor does not suffer however.

On we are herded into the vaults of the secret formula with dramatic news clippings and rumours sprawled across the walls. Drawers could be opened, game played, original items gazed at and from the speakers overhead came dramatic snippets. Who knew the secret? Where was it stored away? How could Coca Cola be so awesome?

Visit Atlanta’s “World of Coca-Cola” and 4 more attractions at a savings of up to 43% with CityPASS. Shop Today!

Well, it was brilliant marketing as always and the many insights into how the global infrastructure of delivery even into the most remote of places took place was definitely fascinating. I remember a TED talk from a few years ago that questioned how medical aid was still unable to vaccinate villages in India when Coca Cola has long since reached all corners of the world with their iconic bottles.

Whether you like Coca Cola or not (I do!), you must admire the clever marketing that opened up markets all around the world through tailored campaigns, that visitors could watch in an endless loop on big screens. Did you know that Fanta was invented when Germany couldn’t acquire Coke during WWII? And the army of Coke products was sheer enormous. I didn’t know so many brands, including water and energy drinks, belonged to the company.

In the last room visitors could fully come to terms with this and try out dozens of international flavours. My personal favourite was South Africa. Not before long my belly was full of fizziness and sweet liquid but I did not cave in. I tried every fountain I could, ignoring the increasing stickiness of my fingers, pushing aside my camera that precariously dangled from my arm each time I reached for the tap and making my way through the crowds of excited school kids. 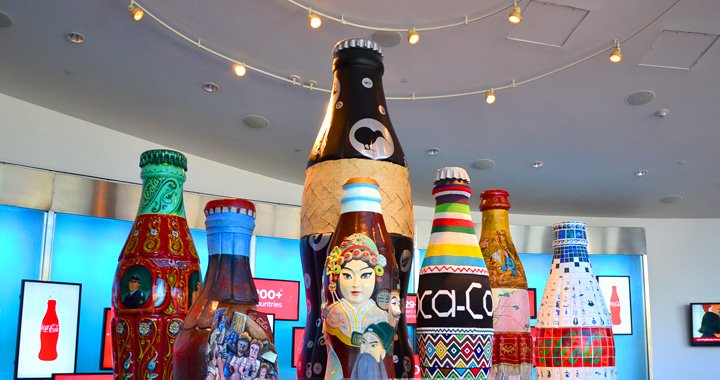 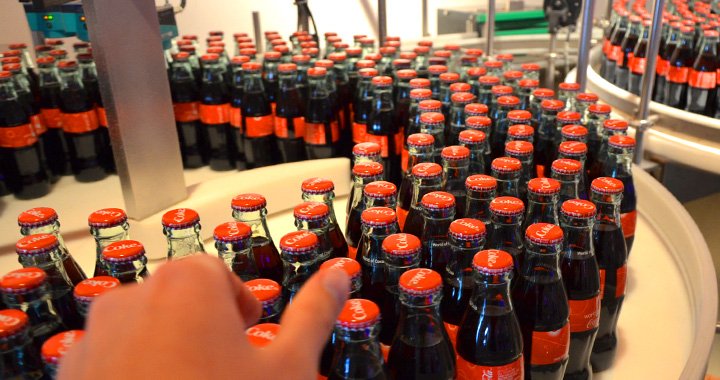 Under the Sea with Georgia Aquarium

It has been quite a while I last visited a zoo or aquarium but as it was just opposite the Coca Cola Museum and I was very curious to see beneath the deep blue wave and dive into a world of floating beauty, I chose my second visit of the day to be said aquarium. It turned out to be one of my highlights with its different areas for the world’s climate zones and diverse sea creatures.

I cannot explain it but jellyfish always draw me in with their white malleable bodies and calm motions despite me being highly engrossed with them whenever I encounter them in real life. Did you see the jellyfish Halloween costume I encountered in Jacksonville? Hands down, one of my favourite costumes ever.

Throughout the day, there are several different shows running at the aquarium and I highly recommend checking out those times before your visit, especially if you can only come here for a limited time during the day like me. It just so happened that I arrived in time for the dolphin show called ‘Dolphin Tales’ and so I meandered my way through the stream of people turning their steps towards the huge basin and the dolphins that were passing the time with their trainers.

Seats fill up quickly and if you arrive late, you might not get in or only get a seat in the first 10 rows, which are the designated splash zone. I preferred dry clothes and sat further up. But even so, the reminders kept playing on repeat and the very well-made short film presenting the rules kept me entertained.

The show itself was a mix between cute dolphin acrobatics, standing and riding on dolphins as well as a Disney-infused light and signing show with a super cheesy fictional background story. I had come at the kiddies time it seemed.

My bladder, however, was having none of it and with all the splish-splashing going on, it became torture to remain seated. Or else I would have opened up a new splash zone. That not being an option, I had to sneak away, so be warned: don’t visit the World of Coca Cola before you visit the aquarium! 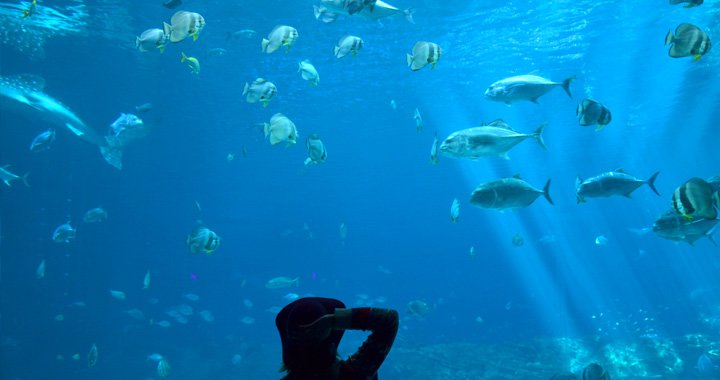 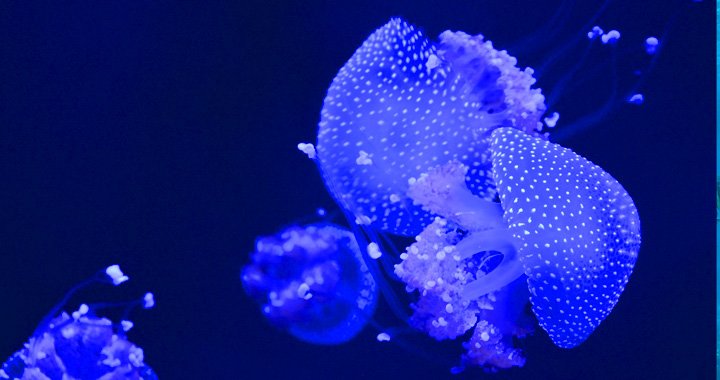 Happy to have made it, I celebrated with some very mediocre tasting mac’n’cheese (not my favourite American dish) and again hopped over in the nick of time for the CNN tour to start. Always curious to get an inside glimpse into the workings of corporations and especially such a worldwide acclaimed and well-watched network as is that of CNN, I was happily sucked into the Globe that towered in the middle of the former theme park building complex. It didn’t even phase me very much that the escalator that took me there was the highest single standing one in the world.

To start things of slowly I saw the make-up of a studio with green screen and projectors and we then proceeded to tuning into the control room, overhearing the director commanding between camera angles and throwing in a joke here and there.

Listening in on Live

One thing I never considered was that the anchors needed to constantly listen to his directions as well despite many of them being irrelevant to their job and presumably very distracting. I bet you get used to it but the connection needs to be kept open for breaking news.

On we went up and down the buildings, peaking into the behind-the-scenes offices with busy people checking each other’s notes while leaning on tables and packing their stuff to end their day’s shift. At times, these rooms can be filled with hundreds of employees during world breaking news times. Unbelievable to imagine when seeing the rooms so organised and relatively empty. 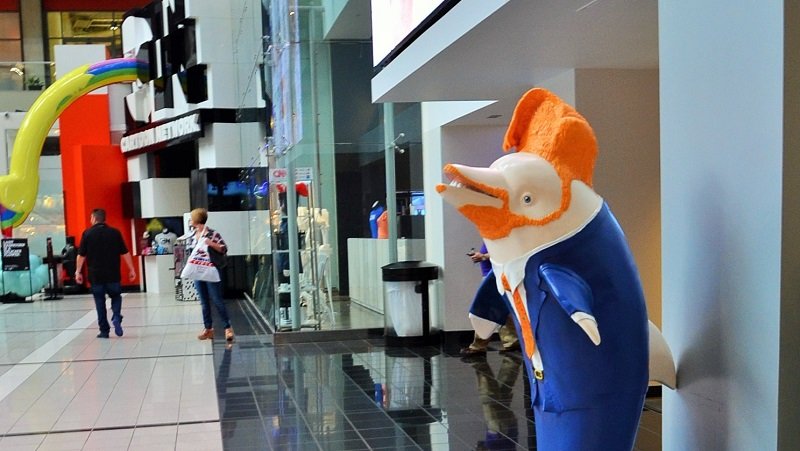 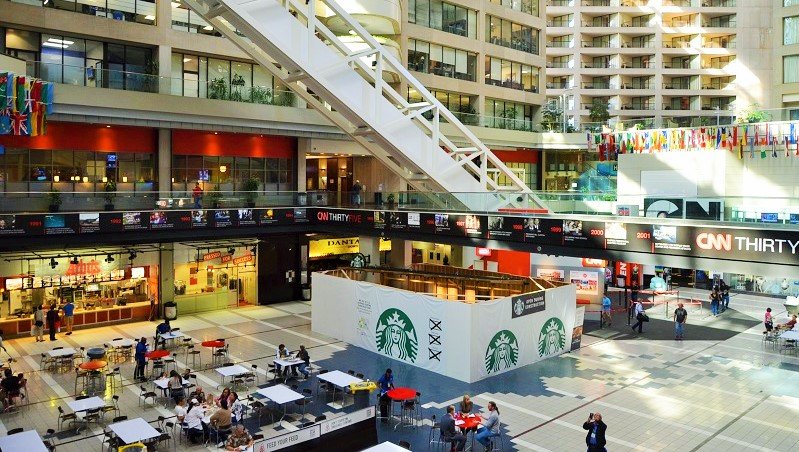 Being Clueless at the College Football Hall of Fame

If you know me, then I know your puzzled looks upon reading that I bothered to visit a football museum. I am the biggest couch potato and possibly least German German out there. I don’t like beer, I don’t like football/soccer and basically no sport at all (I used to dance in countrywide competitions though). So what was I doing in a museum dedicated to the most popular sport in the US? Call it empirical anthropological studies.

Since I wouldn’t be visiting a game any time soon I wanted to see what all the hype was about and the closest I could get to tailgating, which I had heard so much about, was to go into a museum that depicted the growing trend surrounding the college version of the pro games. I felt like an outsider studying the habits of a foreign race – which is an odd thing to say. To phrase it differently, I tried to wrap my head around the pull that the games have on so many.

Why do southern belles dress up in cocktail dresses to make an appearance in the bleachers at games? Why do people flock with handheld posters to cheer on their favourite team even when it is not playing? The fangirl in me cannot comprehend. But it didn’t need to and so I took on a distanced stance and tried to broaden my horizons, learning about different positions and tackling methods (don’t ask me anything about it, it is already forgotten).

I was very tempted to try my hand at the gym section but with all the eager lean teens and the buff trainers busy at the field, I just resumed embraced my potato mode and watched the spectacle from the bleachers until the hall emptied and I had to leave as well.

At the exit door, I asked an attendant what I should do with the entrance badge I had received. He proudly told me I can keep it as a fan gift. And I smilingly handed it to him and admitted I had no use for it. I bet he has not heard this before. I am not won over yet for the sport. 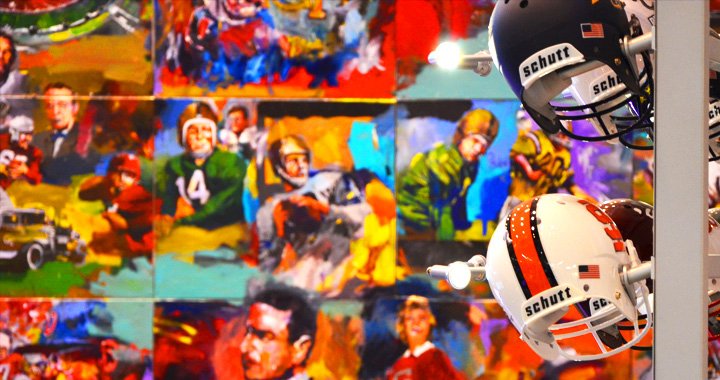 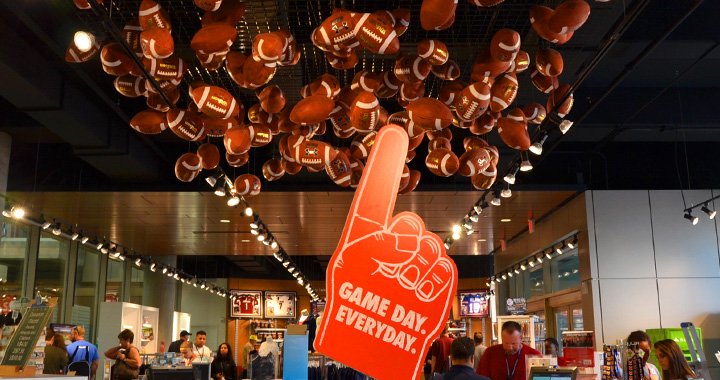 The rest of the day I spent flaneuring through the Olympics park and watching kids play in the water fountains, I spotted colourful street art and aimlessly walked down the centre’s rows of houses, keeping an eye out for a supermarket. I could detect none and even with the help of my not so trusted helper google maps was I unable to locate a single grocery shop.

But this wouldn’t be the USA if there weren’t convenient stores nearby, only that the area at 5 Point wasn’t the nicest with homeless people sleeping next to flowering beds and pushing their way to the cashiers to ask for ten cents. If not looking for money, I guess people were valuing their time as such because the queues were long, moving slowly and the crowd growing restless. A woman behind me even pushed forward giving me money so I could pay for her groceries and let her leave. By then, the homeless man of earlier had left and I pocketed the money for the next person to ask me and made my way home.

Should You Visit Atlanta in One Day?

My visit to Atlanta has been short but sweet (literally) and I am very tempted to come back here soon and see more of what the city has to offer. It will definitely not Atlanta in a day the next time. And who knows, I might find a peach or two? Have you ever been and where would you have sent me? Or if you haven’t been, where would you have gone?

A big thank you to the city of Atlanta for helping me in making the most out of my one day stay with the CityPASS. As always, my opinion remains my own. 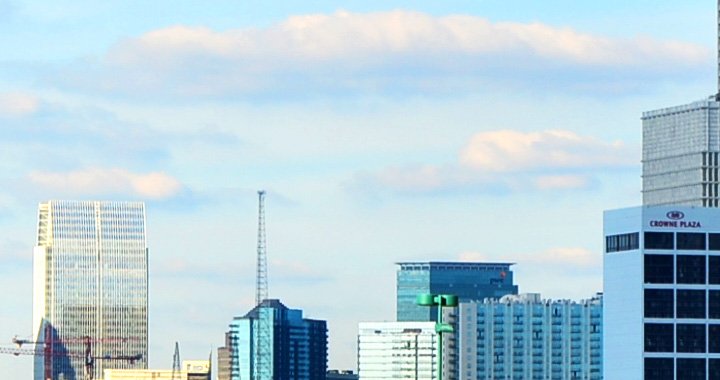 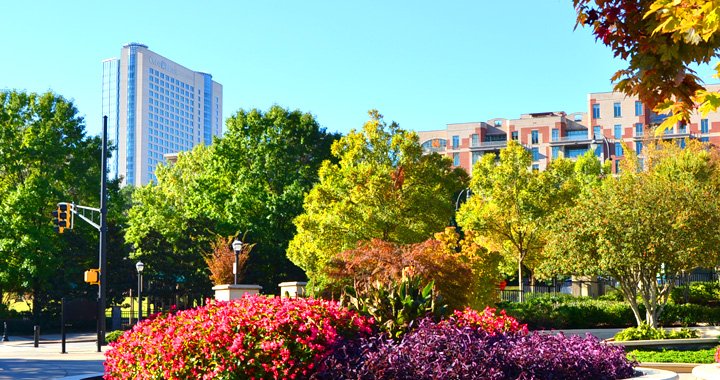 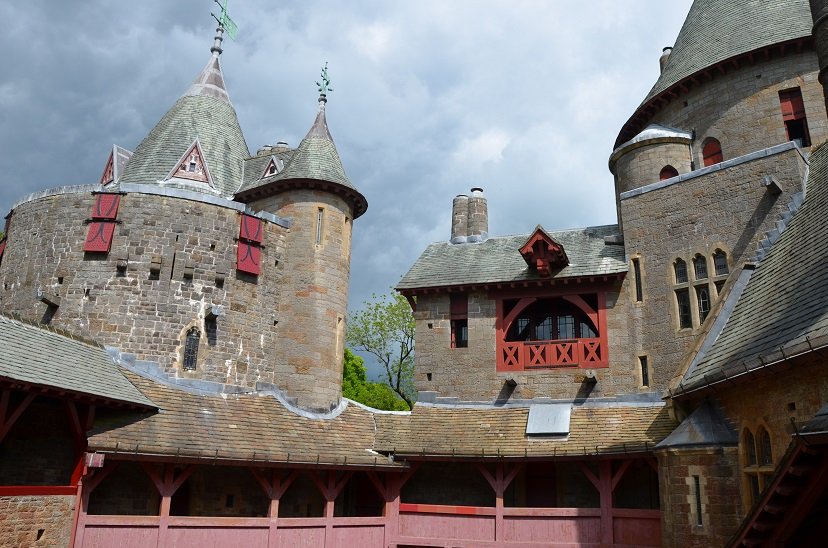 How to Visit Three “Cardiff Castles” in One Day // Sponsored